In the previous post, we identified two parcels of land, totaling about 96 acres, that were purchased by Michael Myers. This land was on the wagon road from Frederick to Creagerstown, in the vicinity of Hunting Creek, within one mile of its confluence with the Monocacy River. Yesterday, I revised the previous post to reflect my more accurate understanding of the location of Hunting Creek. While the name does not show up on most lists of Maryland place names, it is indicated on USGS official topographic maps. If this is of importance to you, please reread that post,as revised.

Michael Myers continued to purchase land in the Hunting Creek area. He must have been a pretty successful blacksmith/wagon builder. When he purchased the first parcel in Lisbon, he paid about 9-1/2 pounds. Two years later he paid 470 pounds for the adjacent 94 acres. If I am not mistaken, 470 pounds was a lot of money in 1795, especially for a blacksmith. Perhaps there was dowry money?

In 1796, Michael bought about 12 acres on Little Hunting Creek, a tributary that empties into Hunting Creek about three miles from the mouth. Further research shows that this land was actually on the main branch of Hunting Creek, very near his parcels at Lisbon. More significantly, on 26 May 1797, he purchased a 12-acre portion of  “Hampton Plain,” a tract that lies on the west bank of the Monocacy, at the mouth of Hunting Creek.

Aha! Now we have a precise location for at least one piece of Michael’s land. Mike Pierce, a Maryland land specialist who has been helping me through “Random Acts of Genealogical Kindness,” looked up a topographic map from 1911 at mytopo.com; here is a close-up of the mouth of Hunting Creek: 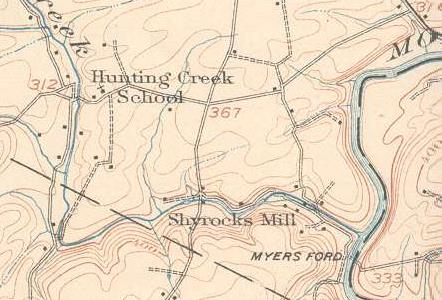 Eureka! Just yards from the stream’s mouth is a river crossing named “Myers Ford,” a name that had stuck for at least a century after Michael Myers lived there. It makes sense that a wagon maker would set up shop near a river ford, where wagons would be vulnerable to damage. Perhaps Michael even took part in maintaining the crossing, which may have been a formidable job. I may be able to connect this thread later. As icing on the cake, there is also “Shyrocks Mill,” obviously a variant spelling on the surname of the individual from whom Michael bought those first two parcels, Christian Shriock.

A repeated caution, there is no strong indication yet whether or not this is the same Michael Myers who briefly owned a lot in nearby Woodsberry, nor whether either one of them is my 4th great grand-uncle. More work is ahead. Next: Problems for Henry Myers in Woodsberry– Michael to the rescue.