Remember the earliest record I found of land purchase by a Michael Myers? It was in Woods Town (also known as Woodsberry, Woodbury, and today is called Woodsboro). Michael bought lot #4 in 1790, and sold it just a year later, to a “Philip Henry Myers,” which name I chalked up to coincidence. But on 1 March 1799, Michael Myers bought the same lot again, not from its owner, but from the sheriff of Frederick County!

The land was seized in a court-issued “writ of Fieri Facias,” which is a seizure of property to satisfy a debt. The writ was issued against not “Philip Henry Myers,” but “Henry Myers,” and Michael along with him. (My mentor, Mike Pierce, thinks that including Michael may have been an error, but there may be more to it.)

A couple of things here get my neck hairs standing up. First, the name, of course. If the individual who bought this lot from Michael eight years earlier was named not “Philip Henry” but “Henry,” it tantalizingly suggests that these were indeed the brothers Michael and Henry Myers, brothers also to Philip and Lawrence Myers, who were settled by this time in Pennsylvania. The name in the 1791 deed, “Philip Henry Myers,” may have been a clerical error, or perhaps brother Philip of PA may have been involved somehow in the purchase.

Here is what Mike Pierce said about the 1799 transaction:

This is a case of the somewhat unique Maryland system of Ground Rents. When Joseph Wood conveyed the property in 1790, it was not a a real sale. The land was “assigned” to Michael Myers who then had to pay annual “ground rent” of 7 shillings, 6 pence forever. He never really owned the land, only what he built on it. This is the system today in much of Baltimore.

In WR 11:177, 7 May 1792, Joseph Wood transferred all his ground rents in Woodberry Town to Adam Creager, who then had the right to collect them. I suspect that Henry Myers didn’t pay the rent, so Adam Creager took action ( I presume through his lawyer David Lynn). From the deed in WR 10:297, it would seem that Philip Henry Myers was responsible for paying the rent, but the writ maybe incorrectly also names Michael. Anyway, Michael came up with the money to pay the back rent and regained ownership.

Since the current deeds do not mention a ground rent, I presume they were extinguished by being purchased by the property owner some time ago.

These ground rents are continuing to cause trouble when people think they buy a property and don’t know about the rent and then lose their home. The Maryland legislature passed new laws last year to correct this, but the land owners have filed lawsuits to block the new law.

So, this is what it looks like: 212 years ago, shoemaker Henry Myers didn’t pay his rent; then blacksmith Michael Myers intervened, to “save” the home. Sure sounds like brothers to me. Here is a section of the topog map showing the close proximity of Woodsboro, Creagerstown, and Michael’s property at Myers Ford. Click on the image to enlarge. 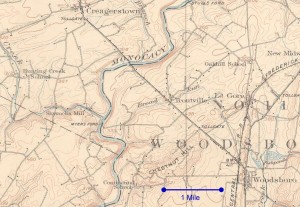 After this transaction, Michael continued buying pieces of land at Hunting Creek. Next post, we will see how the pieces all fit together.