Between 1793 and 1810, Michael Myers purchased seven parcels of land, totaling approx. 168 acres, in the vicinity of Hunting creek, where it meets the Monocacy River. From the deeds and plats at MDlandrec.net, I was able to draw crude diagrams of the parcels, and superimpose them at their approximate location, roughly to scale, on the 1911 topographic map shown earlier, thanks to Mike Pierce and mytopo.com. For a larger map with more details, click on the image. I now believe that the dark blue outlines should be directly across the road from the land to the east. 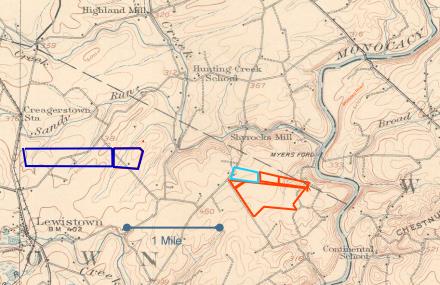 It appears that this particular Michael Myers was very successful as a self-made entrepeneur (blacksmith and wagon-maker) and a farmer. 168 acres is not a huge farm, but not trifling either. Although Maryland was a slave state, slaves were generally owned by the wealthy English colonist-planters, rarely if ever by the much poorer German immigrant families. Michael may have had employees, perhaps apprentices, to help with his business and farming, but most likely not slaves (*! not so – see later posts).

As best I can tell after several weeks of perusing the land records, these seven parcels plus the lot in Woods Town are the only land in Frederick County held outright by any Michael Myers during that period. However, I did uncover another individual by that name. In an estate settlement of one Christian Shull in 1812, a lot in Frederick Town was conveyed in equal parts to all nine of Shull’s children, one of whom was named as “Margaret Myers of Frederick County, Wife of Michael Myers.”

While this Michael could conceivably be the blacksmith of Myers Ford, he could not be the “gravestone” Michael, who married Elizabeth Fout in 1792 and is buried with her at Mt. Olivet Cemetery. So now we have “Michael-1″(1768-1815), husband of Elizabeth Fout  Myers  as memorialized on that gravestone (and purportedly also the brother of Philip Myers); and “Michael-2,” husband of Margaret Shull Myers (nothing more is known).

Other land transactions of note during this period involve a Michael Myers as a trustee or administrator of several estates. Here is a list of those I found, with dates and names of deceased:

3 Jul 1808 John Carlin
10 Sep 1811 Peter Stimmel
30 Oct 1812 John Rusher
7 Jan 1814 John Rusher
27 Aug 1814 Barnhart Gilbert
9 Dec 1816* John Devilibis *The deed recorded on this date states that Michael Myers was a trustee on 5 June 1815, but had since died, and another trustee, Jacob Cramer, taken over. As we shall see in a moment, Cramer was also administrator of Michael Myers’ estate. While these dates do not prove anything, they at least suggest that this is “Michael-1,” who died in 1815, as indicated on his gravestone.

Now let us review the newspaper abstracts naming a Michael Myers as an appointee of the Frederick County government. Someone by that name was appointed as a Supervisor in 1801 and 1804, Supervisor of Roads (1803; could this have something to do with “Myers Ford?”), Justice of the Peace (1803, 1804, 1810), Estate administrator (1805, 1808, 1809, including two of the deceased named above).  Were these “Michael-1,”  “Michael-2,” or a combination of the two, and perhaps others? No convincing evidence, but from my humble deductions, Michael-1 is the stronger candidate. I am also currently leaning toward Michael-1 for the Myers Ford blacksmith, for a couple of reasons already stated. While we are reading  the “news,” don’t forget the article of 9 Mar 1816, naming Jacob Cramer as Administrator for the estate of Michael Myers.

Next question: When Michael the blacksmith died, whether it was in 1815 or some other year, what became of his land at Hunting Creek? I have scoured the index for transactions involving Jacob Cramer, and found several, but none for any of that particular land, and none involving an estate of Michael Myers. I will appeal to Mike Pierce for help, yet again.

Perhaps I am getting too obsessed with identifying a person who is not even a direct ancestor. But I am grasping hard after his parents (who are), and this is all I have to go on, so far.