I am working on a “page” consolidating  several posts about my second great-grandmother, Anne Larsdatter. Unlike my earlier pages, I plan to do some editing and revisions this time. In the meantime, follow the links below for more pieces of the story.

Norway experienced a population explosion in the early 1800’s, especially among the poor, rural husmann class. This was due to several factors, and despite the fact that virtually all arable land was already being farmed. Smallpox vaccine (made mandatory for all children throughout Norway by 1810) greatly reduced infant and child (and adult) mortality. A factor often underrated was the widespread cultivation of potatoes. The potato proved easy to grow, highly productive, could be stored all winter, and provided a “fresh-vegetable” caliber of nutrition, superior to that of cereal grains. The bad news was, potatoes are even more vulnerable to crop failure than grains, which are hardly immune themselves. If both types of crop failed in a single season, starvation would loom.

This is exactly what happened in Gudbrandsdalen, not for a single season, but four years running: 1836, 37, 38, and 39. Note that this was several years prior to the Irish “potato famine” of 1845-46. By the winter of 1839-40 people were “grinding up birch bark and moss to make bread.” For Anne’s part, she and her husband had to feed not only themselves, but four or five growing girls. With that in mind, consider Anne’s arrest for thievery in March of 1840. This is a list of what she and two accomplices allegedly stole:

It would take a Charles Dickens or a Victor Hugo to imagine that Anne received a sentence of eight months in the national prison, 150 miles from home, for such an offense. On the other hand, that her case was appealed all the way to the Supreme Court, albeit unsuccessfully, is itself remarkable.

As for Grandma Anne’s inner strength, she not only survived the prison, but gave birth to Great-Grandpa Ole during the ordeal, at age forty. A quarter-century later, she survived a squalid 50-day ocean voyage to Canada, and a further journey to Wisconsin, where she lived to the age of nearly ninety. That is what I call grit. 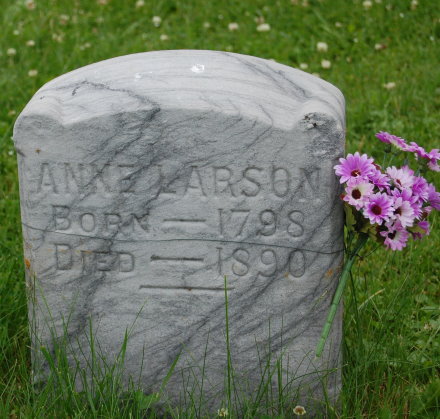