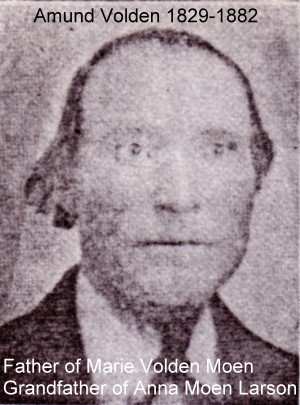 One of the four immigrant families that form the starting point for cousin Orrin Moen’s book, Whence We Came, is that of Amund Amundsen Volden, whose grave I visited at Coon Prairie in 2009. 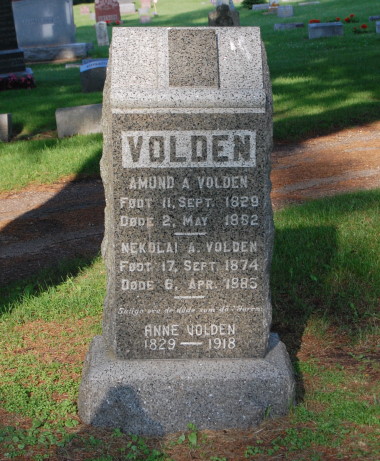 This is an important line; the one that Orrin traced back to King Haakon V and all that medieval royalty. Orrin’s sources are not listed in the database he shared with me, so I have been trying to match some of the facts with sources that I can find. Amund Volden’s baptismal name was Amund Amundsen Dalsegvolden. Here is his christening record from Sør-Fron: 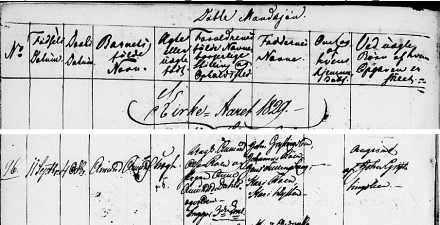 Here is a link to the image at digitalarkivet. Born 11 Sept, christened 04 Oct. Parents (unmarried!) are Amund Olsen Roen and Anne Amundsdatter Dalsegvolden. Sponsors included John(?) Gryttingsmoen, Johannes Röen, and Kari Roen, and two others, illegible. No sponsors from Dalseg or Dalsegvolden, interestingly. Final note in the parents’ column, underlined for emphasis: begge 3ri (…?) to the effect that this was the third illegitimate child for both parents. I think we have the makings of some scandal here.

From this point, things get complicated, due to the frequent changes of peoples’ surnames. Orrin’s data, and that on Tor Onshus’ excellent site, Genealogy from Ringebu and Gudbrandsdalen, name Amund Olsen Roen’s father as Ole Olsen Kongsli, and also give the date of Amund Olsen’s birth as 1801. Like Orrin, Tor also traces this line back to Haakon V. Anyway, maybe Amund Olsen “Roen” was also a “Kongsli?”

But I need some evidence that the two Amund Olsen’s are the same person. Nothing in these two christening records point in that direction, so I decided to look for later records of Amund Olsen Kongsli and/or Roen. So far, nothing further on A. O. Roen. Amund Kongsli was confirmed in 1817. No information there, except for his name. But the next record I found cast some doubt on the “dual” identity. Amund Olsen Kongsli married Anne Olsadatter Tagestad 28 June 1830, nine months after the (illegitimate) birth of Amund A. Dalsegvolden.

This is somewhat upsetting for a couple of reasons. If we are looking at the same person, it seems quite odd that his surname changed from Roen, *back* to his natal surname, Kongsli. Also, the one witness to this marriage is Ole Kongsli (probably the groom’s brother). There are no Roen’s, or even Tagestad’s, listed. Still nothing to tie the two names together.

Another interesting detail in this record is a note to the effect that the marriage was permitted by a letter of acceptance from the KING! Wow, I have never seen anything like that before. A chat partner in Norway speculated that it may have been because the bride and groom were related, e.g. first cousins. Another possibility is that permission may have been needed after the three illegitimate children born earlier to the groom and another woman. Hmm … I wonder if that letter may be on file at the Sør-Fron church. A long shot, but something to check on while I am “in the neighborhood.”

In any case, it seems that the family had some connections in high places. Remember that the Kongsli line is the one leading back to the Fairhair dynasty 400 years earlier. Indeed, the farm name itself contains the Norwegian word for “king.” It is not documented, but historians believe the farm may once have belonged to the Crown. Of course, if that was between 1400 and 1814, it would have been the king of Denmark, whereas at the time of this marriage, the king of Sweden ruled over Norway.

But I digress. Final exhibit:  the christening of Ole Amundsen Tagestad in 1834, son of Amund Olsen and Anne Olsdatter. Yikes, another surname change! Apparently, the married couple took up residence at the bride’s family farm – not at all unusual. Sponsors/witnesses include Ole Kongsli (clinching the parents’ identity), and Anne, Tor, and Embjør Roenstad. At last, a possible connection with the Roen farm. Unfortunately, the handwriting is not very clear. Instead of Roenstad, it might be Rolstad, another farm in the area (and home of some other ancestors of ours). In the former case, the evidence is frail; in the latter, non-existent. Another quandary to pack along to Norway … Stay tuned.