Marie Volden, mother of Anna Moen, is the only one of my father’s (Lovell Larson’s) four grandparents who was born in America (1858). Her parents had immigrated just over a year earlier, the earliest immigrants among the four families.

Marie’s father, Amund Amundsen Volden, was born (1829) on the Volden farm in Sør-Fron parish. At the time, it was called Dalsegvolden, as it was a tenant farm under Dalsegg, located several kilometers across the river. Here is an old building at Volden, being re-erected. 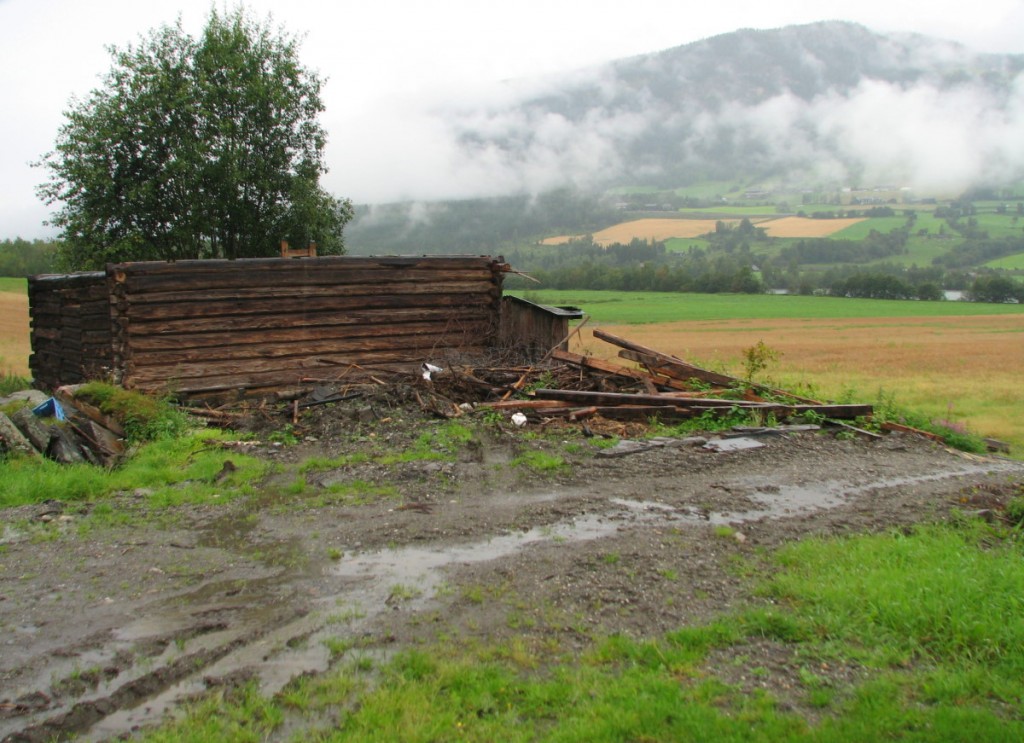 And here are Volden’s fields, reaching down to the river. 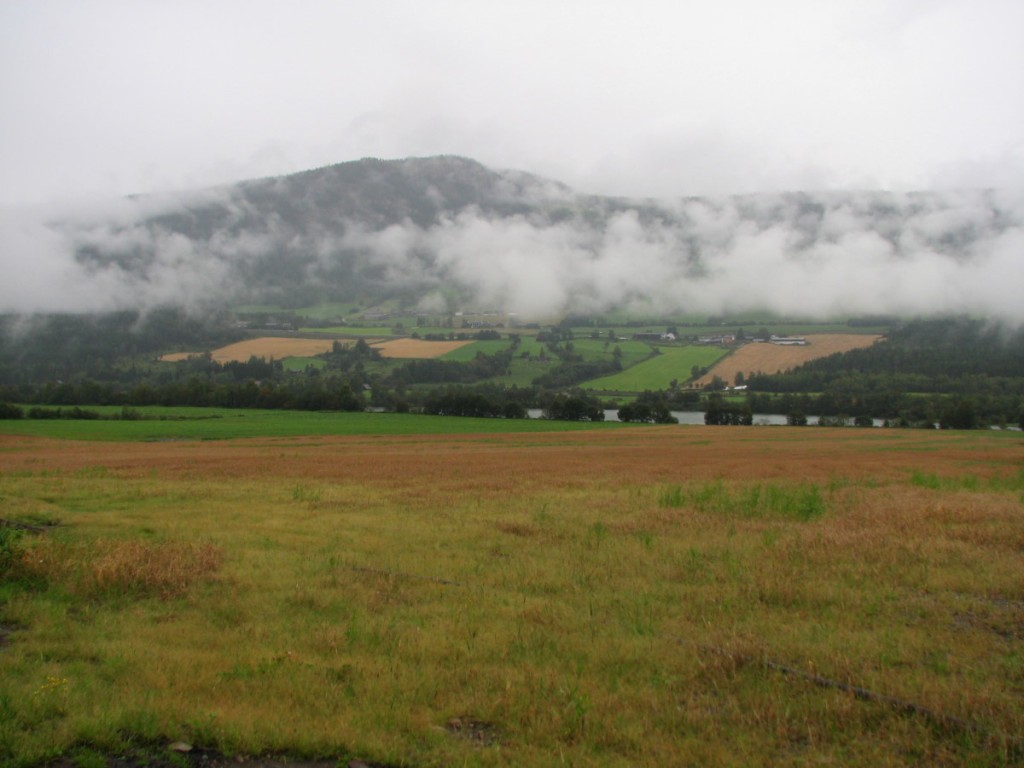 Just across the river is Hundorp, site of Dale Gudbrands Gård. There, we photographed a 10th-century Viking burial mound, and the modern B & B located there (see Facebook album).

Volden is currently occupied by Bente Haverstad and her family. 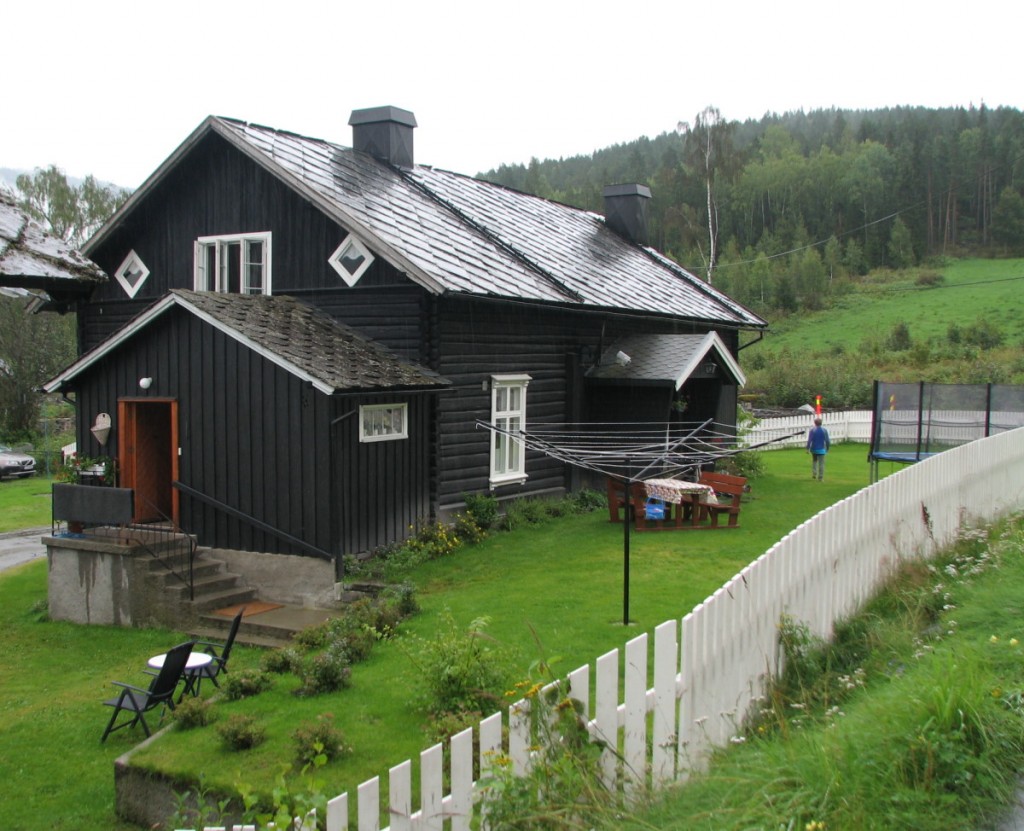 Bente was extremely gracious, inviting us into her home for coffee and waffles. She struggled with English, but her grandsons Emil and Ole (who were visiting) were helpful with the language issue. Bente is a descendant of the Volden line. Her grandfather, Amund(!) Hansen Volden, traveled to America in the early 1900’s, then returned to Norway. It is unclear if he was related to our ancestor, Amund Amundsen (around 50 years older), but investigation continues. 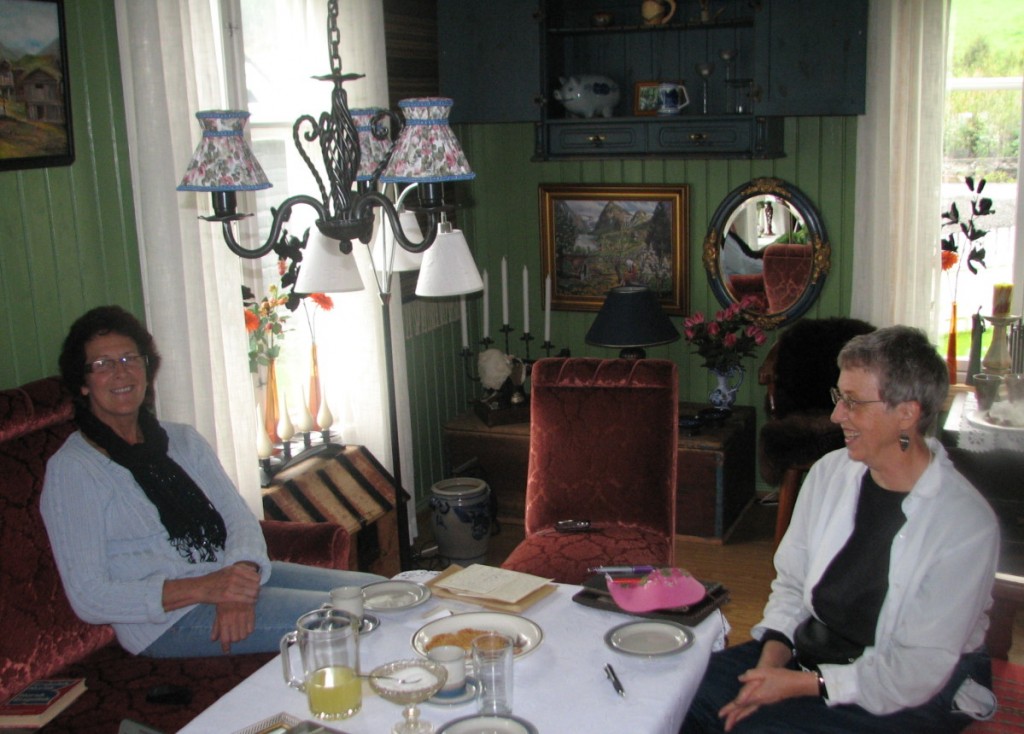 Bente’s home at Volden was furnished with lovely antiques, some probably dating to the time of our ancestors. 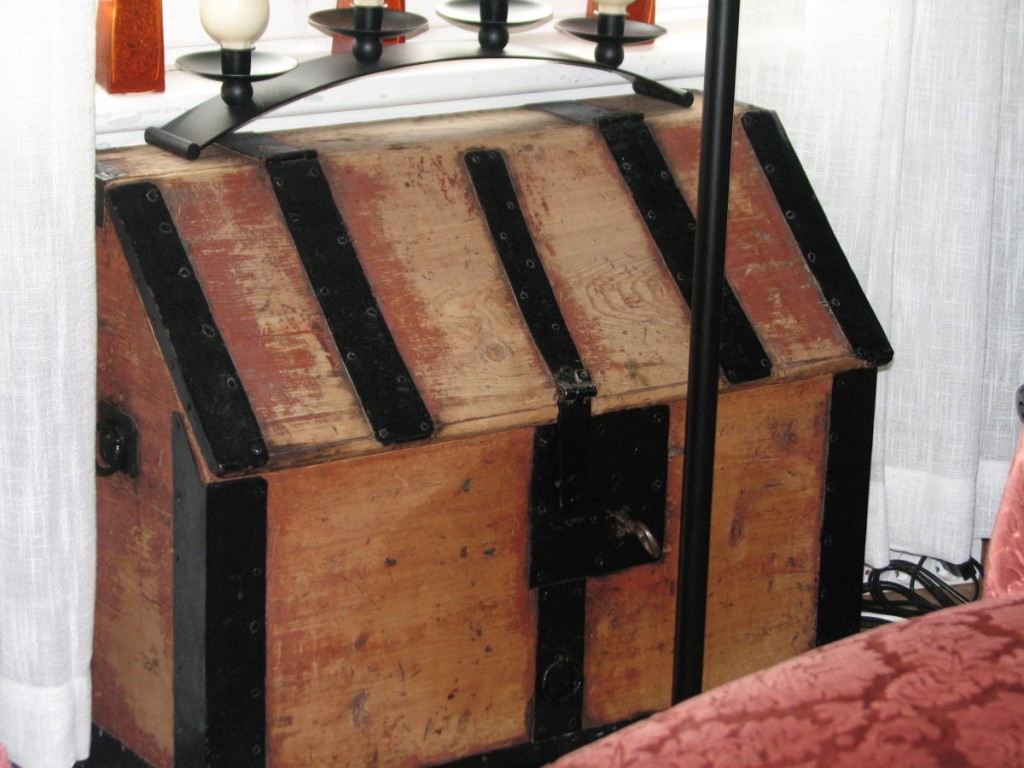 On the living room walls were several paintings, some of which, they said, were of the nearby Skurdal farm, signed by Magnus Skurdal in the 1980’s and 90’s. This one, in particular, might depict the 19th-century homes of one or two tenant farmers. 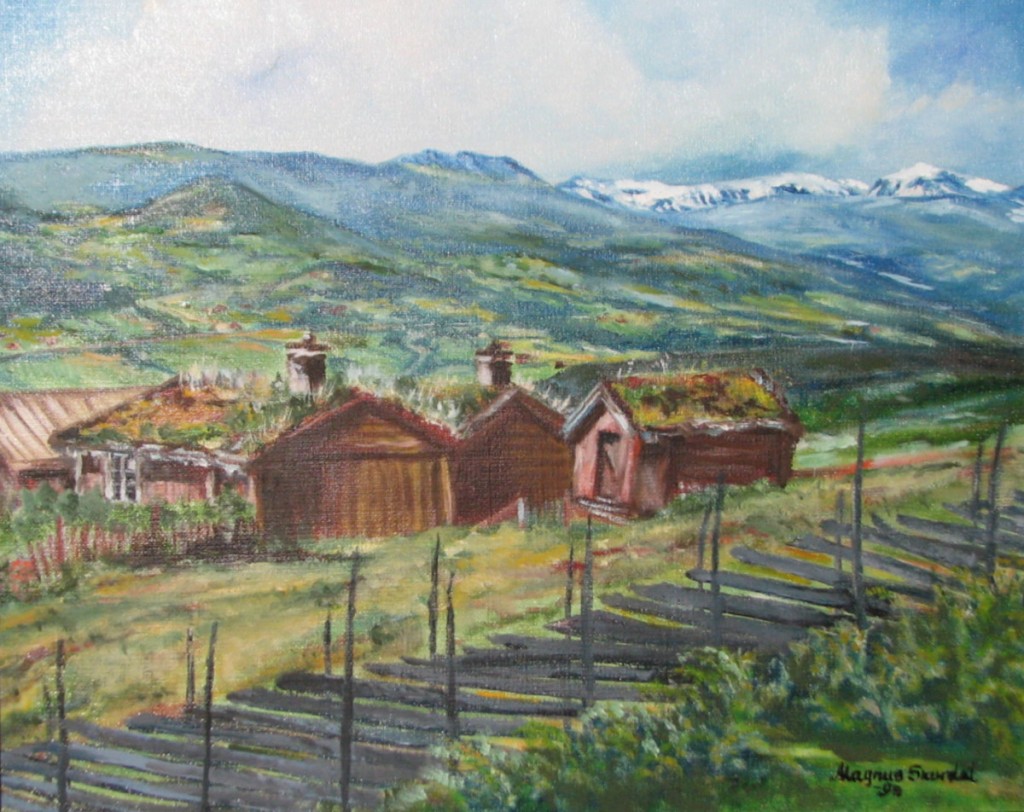 Maurhaugen was the birthplace of Marie Volden’s mother, Anne Madsdatter (1829), who married Amund Amundsen in 1854. Don’t be confused by all those Anne’s. Counting the variant “Anna,” it was the given name of Lovell Larson’s mother, paternal grandmother, and three of his four great-grandmothers! This is the main house at Maurhaugen, probably dating from the early 1900’s. 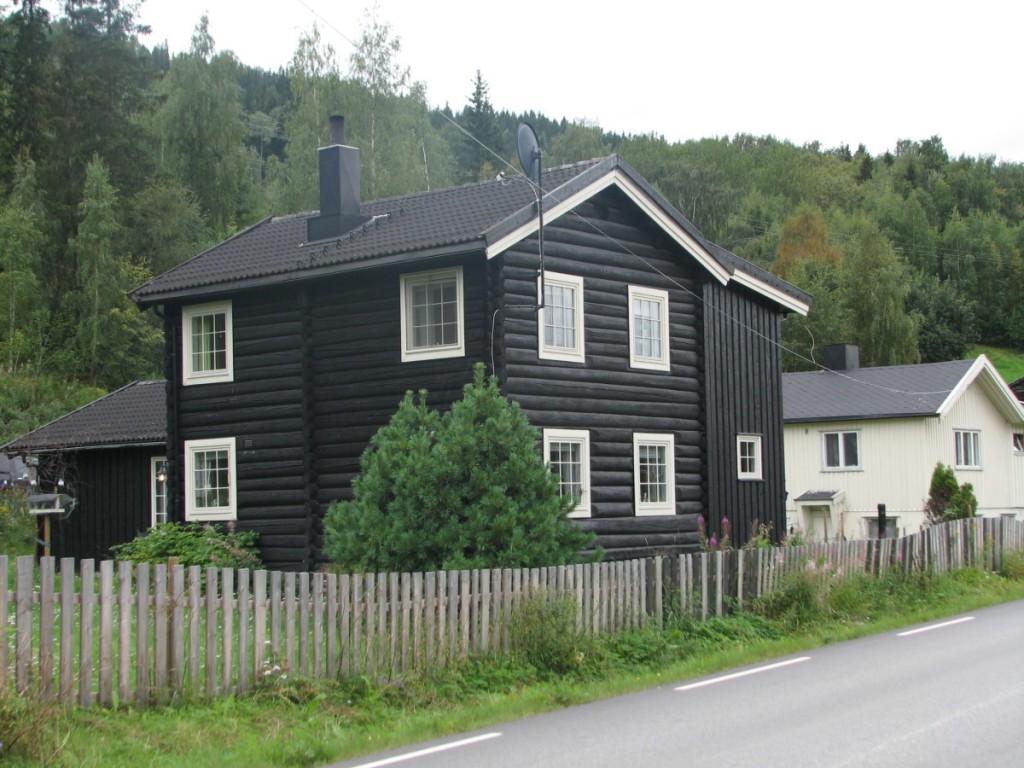 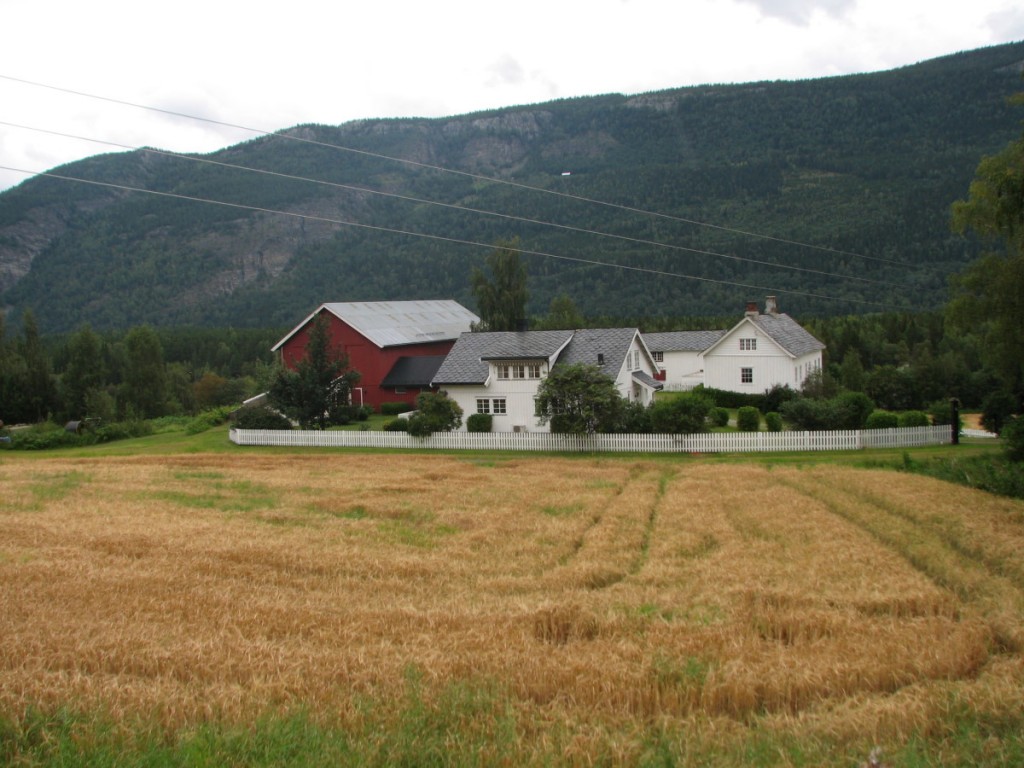 You will remember from an earlier post that I had thought Skurdalshaugen to be the birthplace of Anne Larsdatter (mother of Ole Larson), but learned otherwise during my visit. However, it was the birthplace of Mads Nielsen, father of Anne Madsdatter Maurhaugen, my 2nd great-grandmother in the Volden line.