In case you are confused, Anne Samuelsdatter was Ole Larson’s first wife (and the mother of Isaac, Axel, Louise, and Smith Larson). We actually visited Tretten and Fåvang before Sør-Fron, but I wanted to start my narrative with “Ole Larson’s folks.”

We stayed one night at Glomstad Gård, a lovely B & B just a mile from the farms I was interested in. 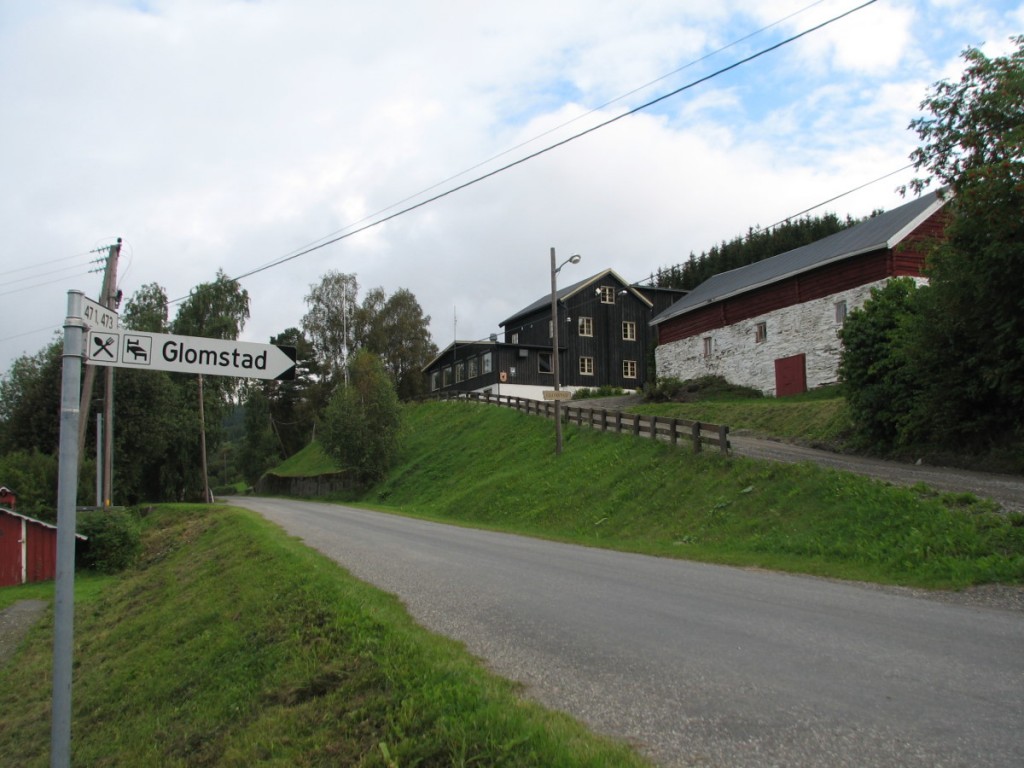 Glomstad is high on the hillside, offering commanding views of this section of the valley. 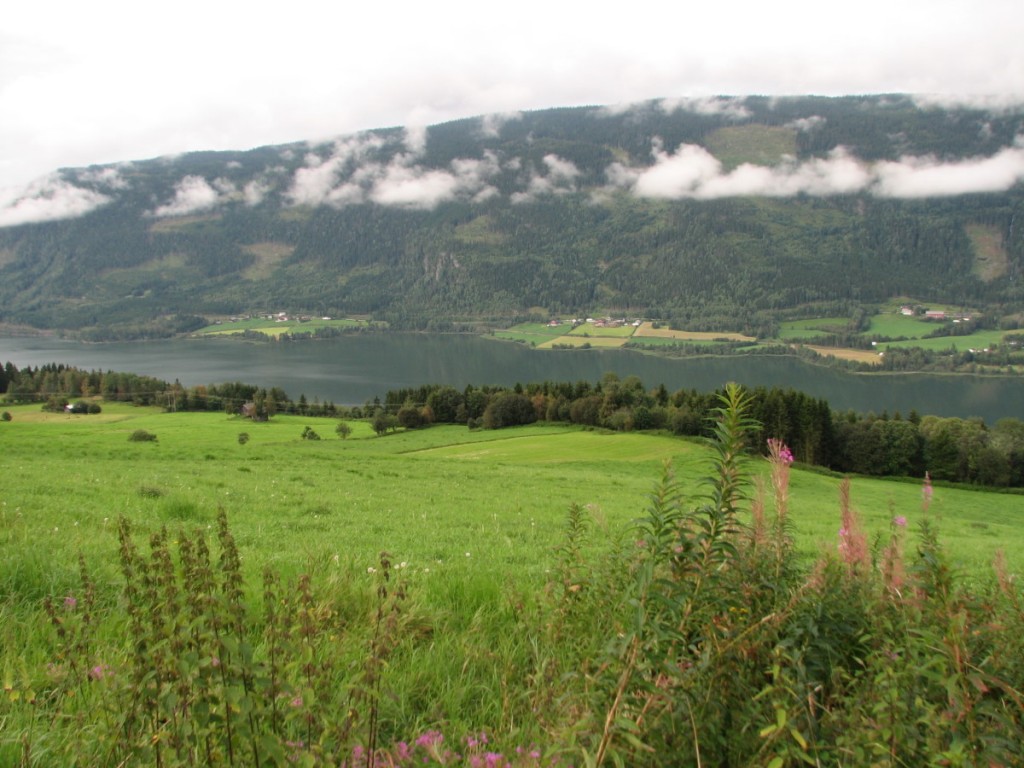 Waiting for us at the B & B was Knut Kvernflaten, a “shirttail” relative who has guided other visitors in the area, including cousin Orrin Moen, and Lois and Myrna, on earlier visits. I can’t say enough in praise of his knowledge and generosity. Knut was our guide both in Tretten, and the next day at Fåvang (next post). 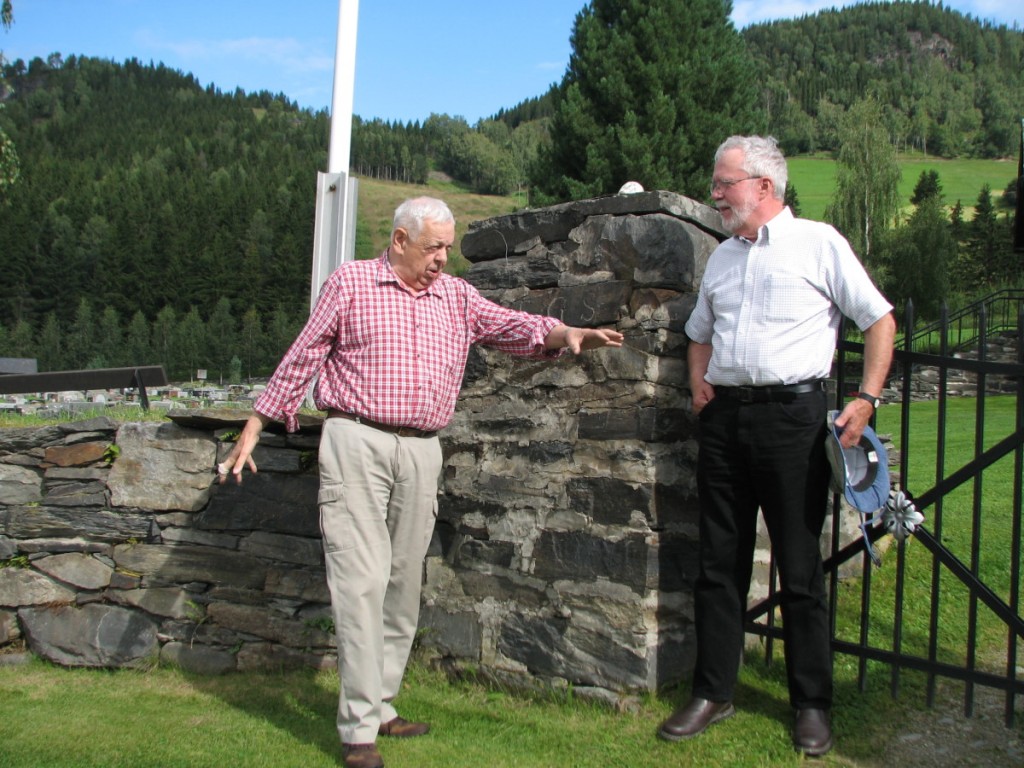 Knut told me that according to local folklore, Tretten (Norwegian for “thirteen”) got its name after the Black Death ravaged Norway in the late 1300’s, when only thirteen families survived in what had been a whole parish. 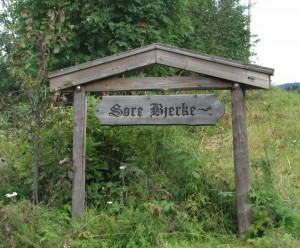 Just a kilometer down the road from Glomstad, we found the South Bjerke farm. This, I believe, is the birthplace of not only Anne Samuelsdatter (1845), but of her father, Samuel Jørgensen (1815), paternal grandfather, Jørgen Gulbrandsen (1789), and grandmother, Ombjor Samuelsdatter (1789).

No one was home when we knocked at the door, but we took the liberty of photographing the grounds and some buildings. 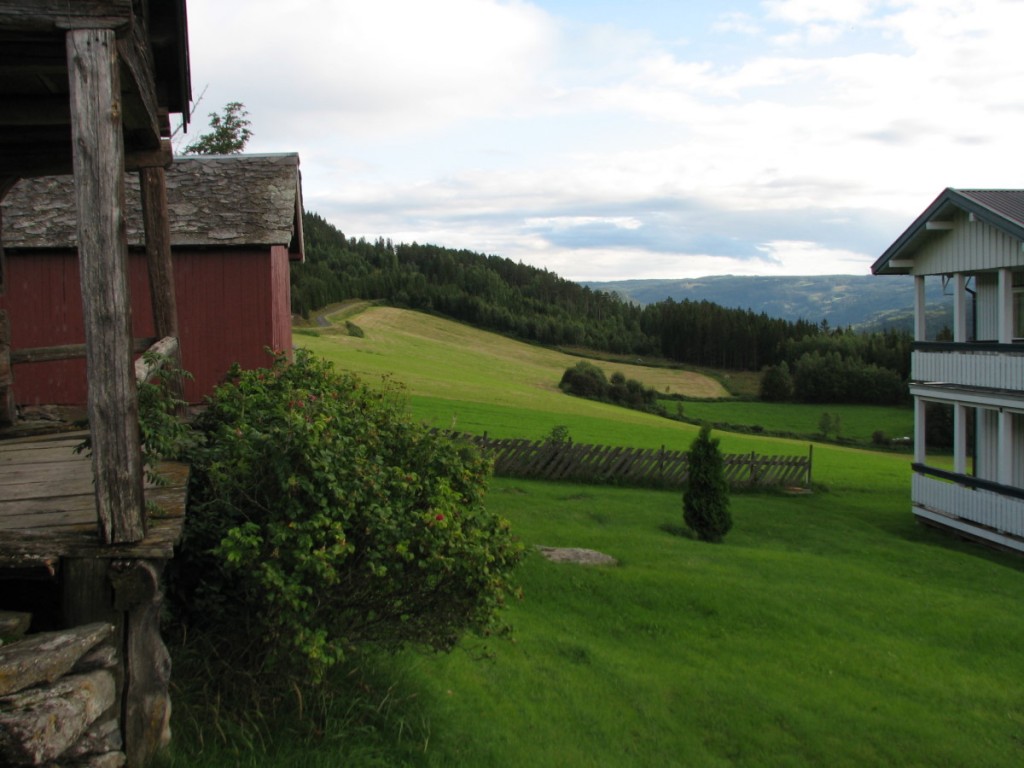 One can almost imagine the family in a hussmansplass at the far end of the fields, or further into the forest, living in a rude house like the one below. 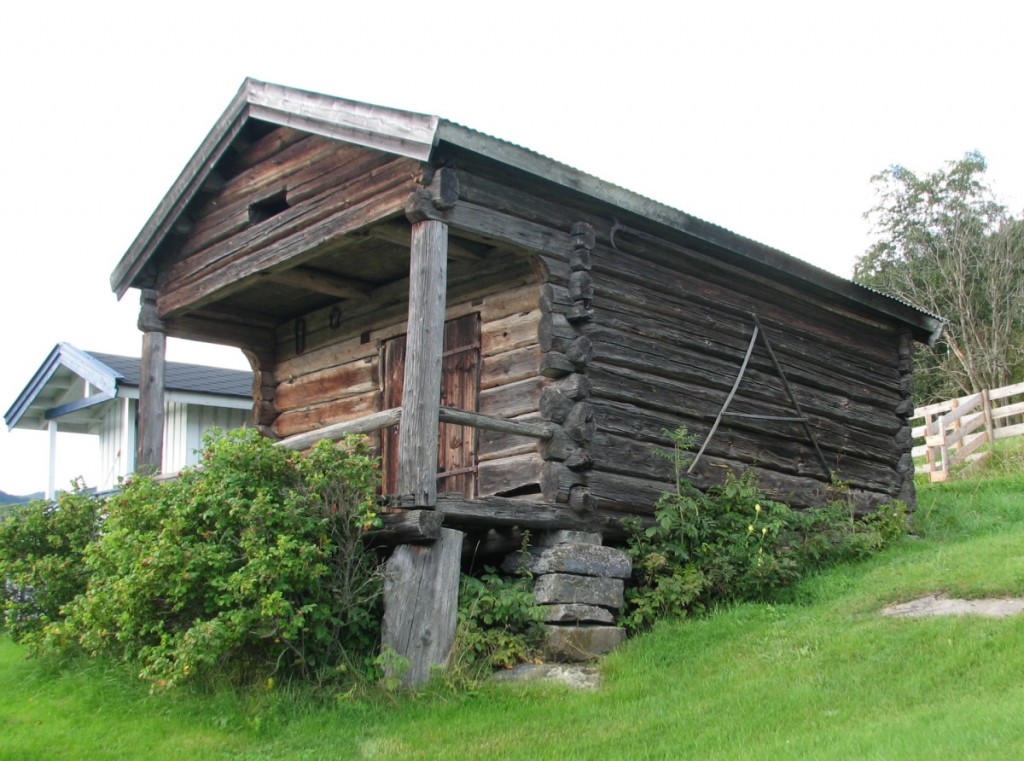 Next,a telephoto shot of Bjerke (center right), taken from across the river, at the other Tretten farm on  my short list. 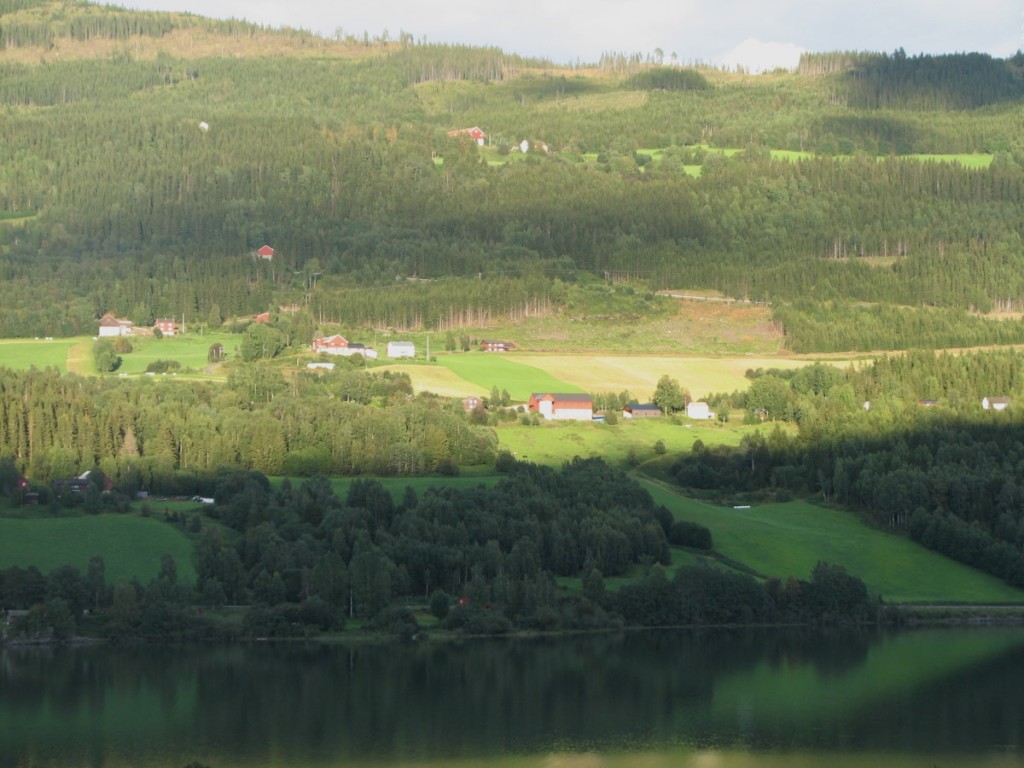 Literally translated, this name means “the abandoned farm.”  There are many farms so named in Norway, again, plausibly, as a result of the Black Death. At the time of Marit Pedersdatter’s birth (1820), it was called “Glømme-Ødegaarden,” as it was a husmannsplass under the farm Glømmen, on the opposite side of the river (near Bjerke). Here is a wider photo, with Ødegaarden fields in the foreground, and Bjerke far away. 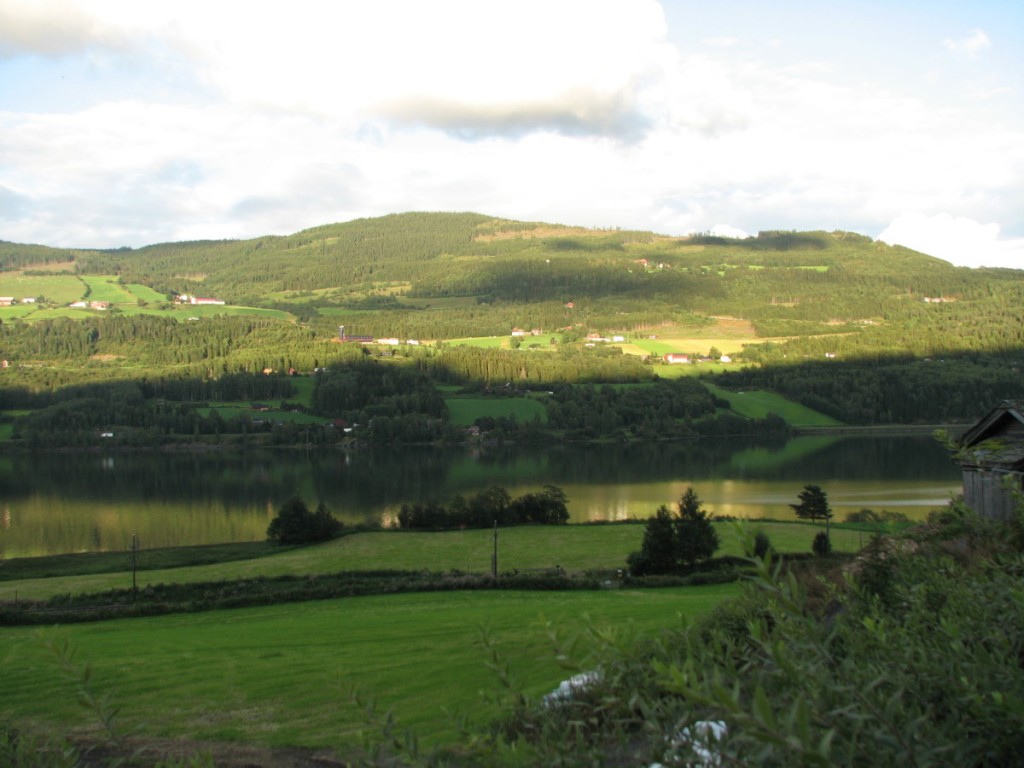 I asked Knut why so many farms had subordinate plots across the river. There were surely not many bridges in the old days. For one thing, he said, there were boats, of course. But more importantly, when the river was frozen in winter, it was easily crossed on foot or other overland transport. His next comment was amusing and significant; to paraphrase, “A lot of babies were born nine months after the river was frozen.”

I neglected to photograph the buildings at the current farm compound. However, the owner, Steiner Ødegaard, was most helpful. He showed us an old photo of a woman who lived there at the same time as our ancestor, also named Marit. She was born at another location in 1810, ten years before Anne’s mother, and they were probably acquainted. 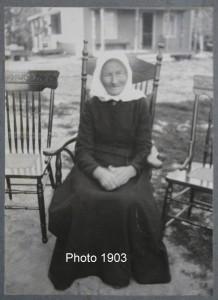 There was one old building at the farm, a small house that was occupied until the 1990’s. 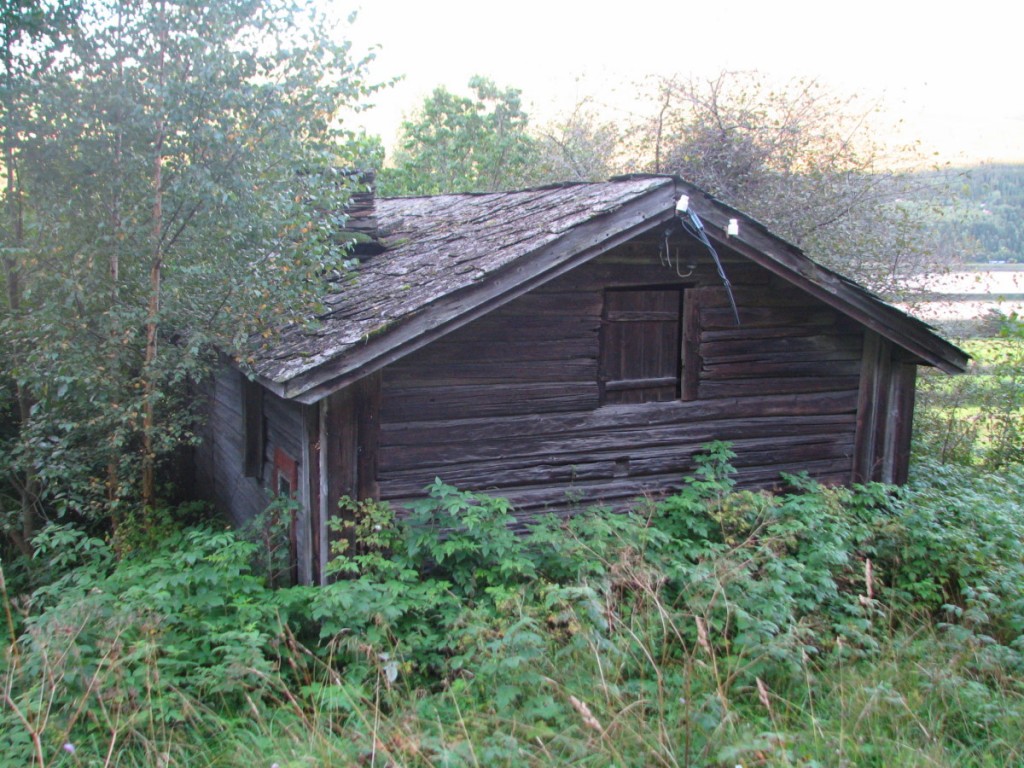 Also the stone ruins of a barn. 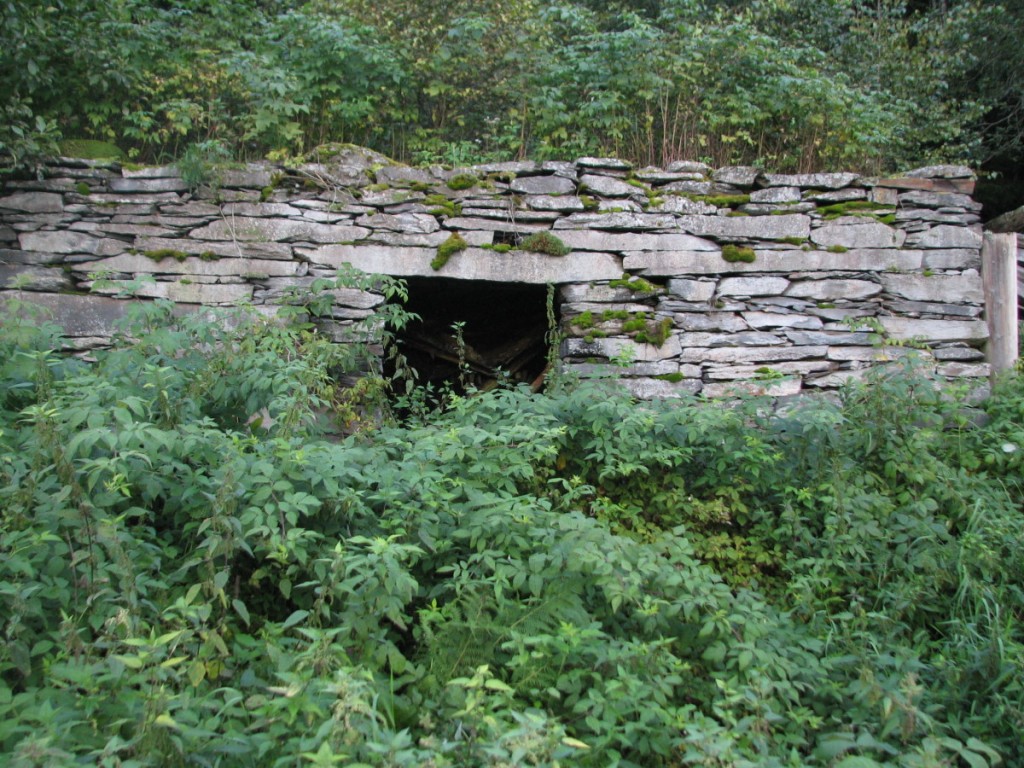 Next: Fåvang, birthplace of Gunder Moen.