“Aunt Nora” was the only sibling of my grandfather Dan Myers whom I remember meeting in person. I knew her by her second married surname, Splatt. I met her three or four times, both at her home in Reno, NV, and at mine in Longview, WA. I was quite young; not more than ten or twelve at the last of these meetings. Below is a rather blurry frame from a home movie dated 1954. I recognize the background as the view from my home in Longview. However, being only seven years old at the time, I do not remember any details of this visit. 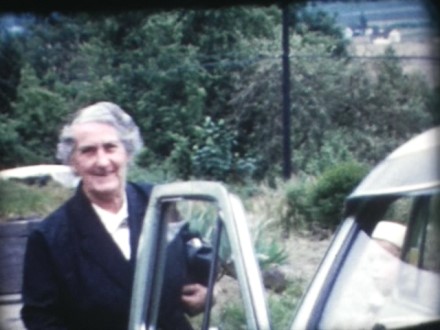 Nora had two sons, one by each of her two marriages. The eldest was Charles Van Arnam (1901-1988). He is pictured in the still photo below, also dated 1954. I do not remember meeting “Charlie,” but if this still (from sister Bonnie’s collection) was taken on the same visit, I must have done. Bonnie does recall meeting Charlie at a later date. 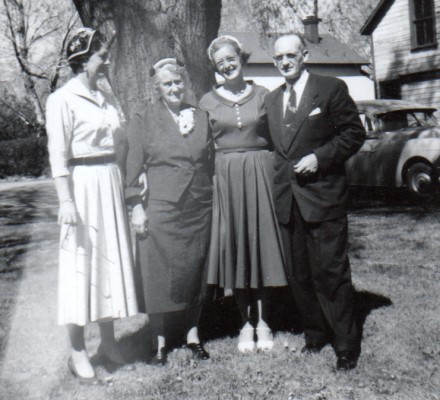 I do not recognize the background here, but the car looks like the same one as in the movie frame. The two women were later identified The women, left to right, are Dorothy (Mrs. Charles) Van Arnam, Aunt Nora, and Norma Splatt, sister of Nora’s second husband (who is not pictured).

Michele Candee, Vivian’s adopted daughter by her second marriage, has been very helpful in piecing together this story. Thanks, Michele!