In my articles on ancient history (1, 2, and 3), I had a lot of fun claiming the great-grandparenthood of famous and infamous figures such as Saint Olaf, William the Conqueror, Charlemagne, Isabella the She-Wolf, Old King Cole, and the emperor Claudius, among many others. As I have already admitted, the three lines leading from me back to these ancients all have links that are controversial or doubtful.

Up until the mid-twentieth century, both amateur and professional genealogists were highly motivated to find ancestors among the noble and royal classes of Europe. A great many connections were made, and published, based on faulty or non-existent documentation. These errors, even fraud in some cases, have been largely exposed in recent years, with the soaring popularity of genealogy and explosion of documents available on the Internet, along with an emphasis on sound methods, at least among professionals.

Even though none of my own three lines may hold up to close scrutiny, and I have already found evidence quite damaging to one of them, I am not keen on removing them from my data. Instead, I am adding cautionary notes at each doubtful link, so a careful reader will know of the doubts.

My reasoning is that even though specific links may be spurious, the likelihood that we all have royal ancestry is very high indeed. It is intuitively obvious, and I just found an old Atlantic article, describing the work of genealogist/computer scientist Mark Humphrys and statistician Joseph Chang that offered scientific support for their theory that all Europeans descend from a single male ancestor as little as 600 years ago. That single ancestor, let’s call him Alph, lived in a Europe depopulated to about 25 million souls by the Black Death in the late 1300’s.

Among those 25 million Europeans, how many others of Alph’s generation might probably be an ancestor of mine and/or yours? Well, first off, scientists estimate that about 80% of individuals in that population have descendants surviving today, so now there are about 20 million in the population. Now figure the number of, let’s say 25 generations, or 25th great-grandfather/mother so, discounting marriage of cousins of any distance, two to the 25th power equals 33,554,432. So, two things are obvious. One, a  really lot of distant cousins (along with some well-known first cousins) get married and have children. Two, quite a few of those 20 million were another of my (or your, or Barack Obama’s) 33 million mathematically possible 25th great-grandfathers/mothers. Going back beyond the bottleneck of the Black Death, to the time of Charlemagne, about another 600 years, although Europe’s population was roughly equal, any child born today (about 40 generations later) with any European ancestry has at least 2 to the 40th power, that’s over a trillion mathematically possible 40th great-grandparents in that generation alone, not to mention half that many 39th, etc. Both the computer guy/genealogist and the statistician agree that Charlemagne was surely one of them. 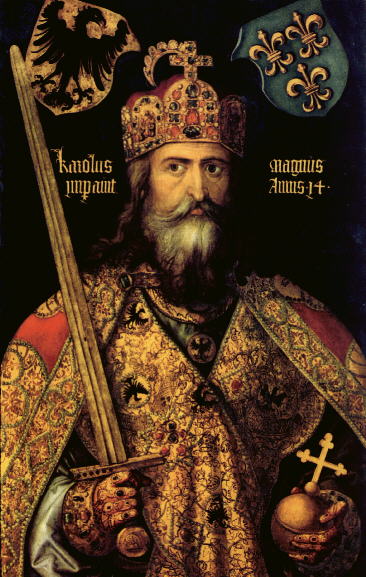