Twelve years after Philip Myers’ death, his widow Martha applied for widow’s benefits. By this time, she was in her mid-80’s, and blind. 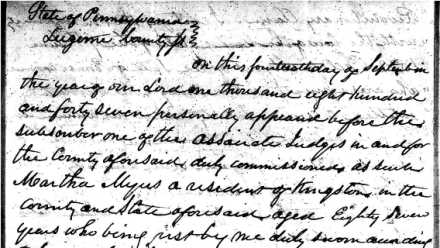 The date of this declaration is 14 Sept. 1847. Martha said she was 87 years old (my data shows a birth date – not necessarily unshakeable – that would put her at 84). Further on, it explains that she is claiming benefits under an 1838 act of Congress, quoting the law’s title: “an act granting half pay and pensions to certain widows.” She states that she married Philip on 14 July 1787. This is important, as the law requires that they were married prior to 1794. Unlike Philip, Martha signed her declaration with an “X.” This may have been because she never learned to write her name, or because by this time she was blind.

Substantiating that marriage date subsequently became quite an issue. First, on 20 October 1847, just a few days after Martha’s declaration, her sister Mary Bennet Tuttle appeared to swear to it (also signing with an “X.”) Below her sworn affidavit, on the same page, is a note from A. Beaumont, Justice of the Peace, attesting to the character and truthfulness of both women, and bringing in the seemingly irrelevant fact that Martha Myers was present at the infamous Forty Fort Massacre in 1778(!). See Part 3 of the series cited above.

Regardless of the testimony, and the judge’s affirmation, the bureaucracy was not satisfied. On October 23, a letter from the Pension Office in Washington DC states that

… their marriage before 1794 should be established by record or documentary proof, or it must be shown that no such evidence exists before the testimony of individuals can be received. The proof upon this point now presented is not satisfactory.

On Nov 3, Philip Jackson (possibly Martha’s cousin) about 90 years of age, swore to a lengthy statement as a witness to the wedding itself, and a lifelong friend and neighbor of the applicant. Jackson stated that the Myers family Bible was probably destroyed when their house burned down “about fifty years ago.”

However, below the end of Jackson’s affidavit, on the same page, is a statement by the same justice who took the deposition, Anton Atherton, that he has examined the family bible, specifically the memorandum pages of vital statistics, and

… I have no doubt of its authenticity: to wit, under the head of Marriages, it informed “Philip Myers was married to Martha Bennet 15 July, AD 1787.”

But the judge’s testimony regarding the Bible inscription only whetted the appetite of the Pension Office. Their next letter, dated Dec. 7, 1847, insists,

It appears … that she has a record of her marriage in her family Bible. That record should be sent to this office, as the testimony of individuals cannot be [received?] as long as evidence of a higher grade is known to exist.

The case dragged on until at least July 5, 1848, when a note from U.S. Representative Chester Butler stated that he has inspected the memorandum in the Myers family Bible giving the date of the marriage, and that he recognized the handwriting as that of the late Philip Myers, “with whom I was well acquainted.” The Bible in question had apparently made its way to Washington, perhaps in the hands of Rep. Butler himself. Subsequent correspondence specified how the Bible was to be returned to Mrs. Myers in Wyoming.

Ironically, as soon as this issue was finally resolved, Congress passed the most liberal pension bill of all on July 29, 1848. To obtain these increased benefits, Martha Myers had to appear again before the court, which she did on 10 Sept. 1849. There are not so many documents this time; apparently, the new benefits were approved with less fuss. Sadly, Martha had barely more than a year to enjoy them, before she died on 3 Jan 1851, at the age (by my data) of 87.

Next: another early Myers Bible.