I am preparing a multi-post series featuring newly discovered information on the Revolutionary War service of a distant maternal great-grandfather, Philip Myers. The first installment is ready and will appear later today, Veterans Day. But as I contemplate the occasion, I am also moved to acknowledge the military service of some Larson relatives in the more recent past.

My father’s three younger brothers were all in the military during World War 2. Of the first two, I have only the sketchiest notion of their experience.

I will begin with Uncle Bob (Robert George Larson), who was born in 1919 and passed away just two weeks ago, on 30 October 2012. RIP, Uncle. Bob’s son Eric Larson has put up a posthumous facebook page for Uncle Bob:
http://www.facebook.com/robert.larson.71465.

On a visit to Bob’s home in October 2010, he told me a little about his experience in the US Navy in the Pacific theater. I later jotted down what little I remembered. I do have a couple photos of him in uniform, from my mother’s collection. 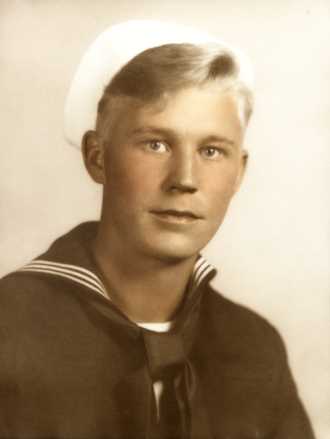 Working in the rigging of a ship at Long Beach Harbor, he was knocked unconscious by an electric shock, and woke up in a basket being lowered by a derrick. Based for a time in the New Hebrides islands, Bob passed his exam for flight school, but “crashed out” early in training. He was assigned to a minesweeper that was active in the battle for Okinawa [Apr-Jun 1945], and “another chain of islands closer to Japan” [? -Possibly still part of Okinawa]. This was part of the Allies’ preparation for an invasion of Japan, which never occurred, as the A-bomb attack on Hiroshima and Nagasaki ended the war first.

I’m afraid I know even less about Uncle Vernon’s (Vernon Alexander Larson, 1917-2002) WW2 service, nor do I have even a photo in uniform. But here he is in the right time-frame (1945), with Aunt Audrey and their two eldest, Joyce and Linda. 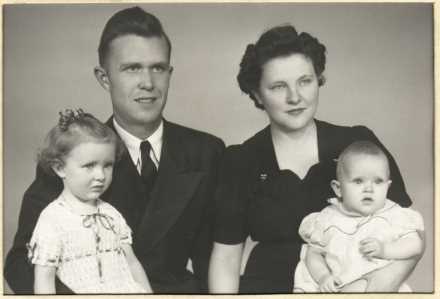 Vernon was in the Army, and arrived in Europe just after the Axis powers surrendered. He spent some time on occupation duty at a base in Germany. His three-page autobiography focuses on his childhood, and does not mention his military service.

Uncle Ivan’s (Ivan Allen Larson, b. 1924) autobiography, on the other hand, thoroughly accounts for his military service. 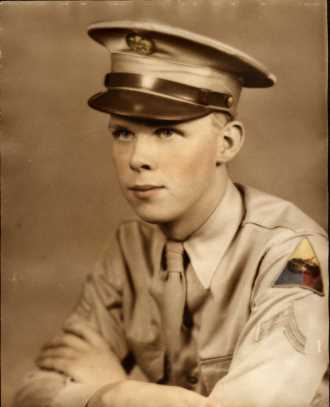 I reproduce here the portion dealing with his experience in the Battle of the Bulge, and the medals he received later. Unfortunately, I can only paste it in as three images. Click on any one of them to enlarge it. 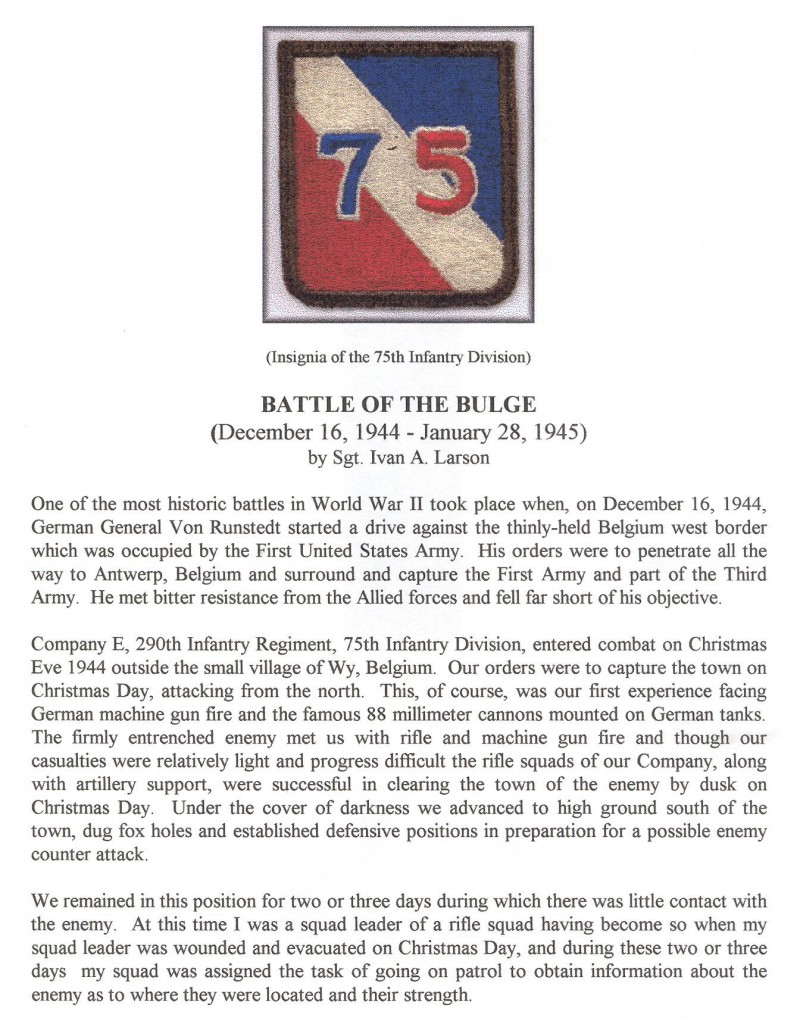 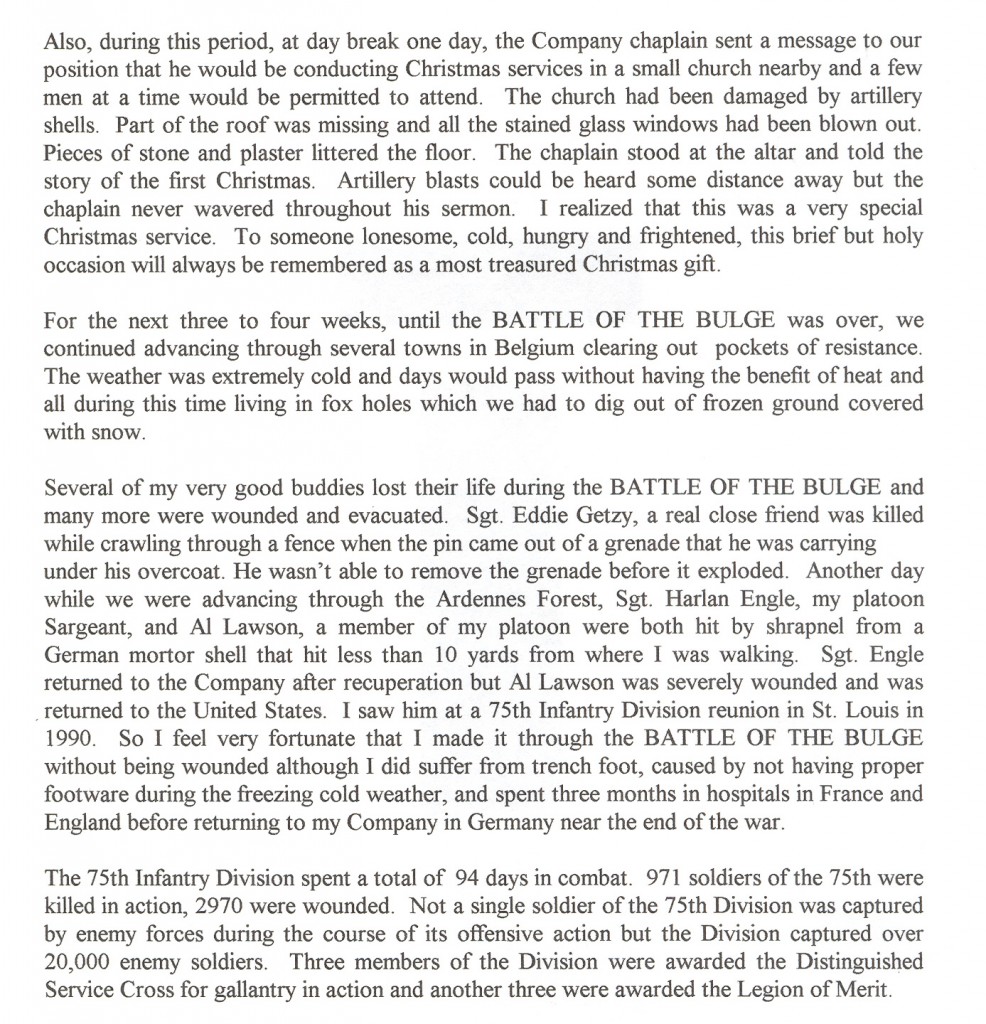 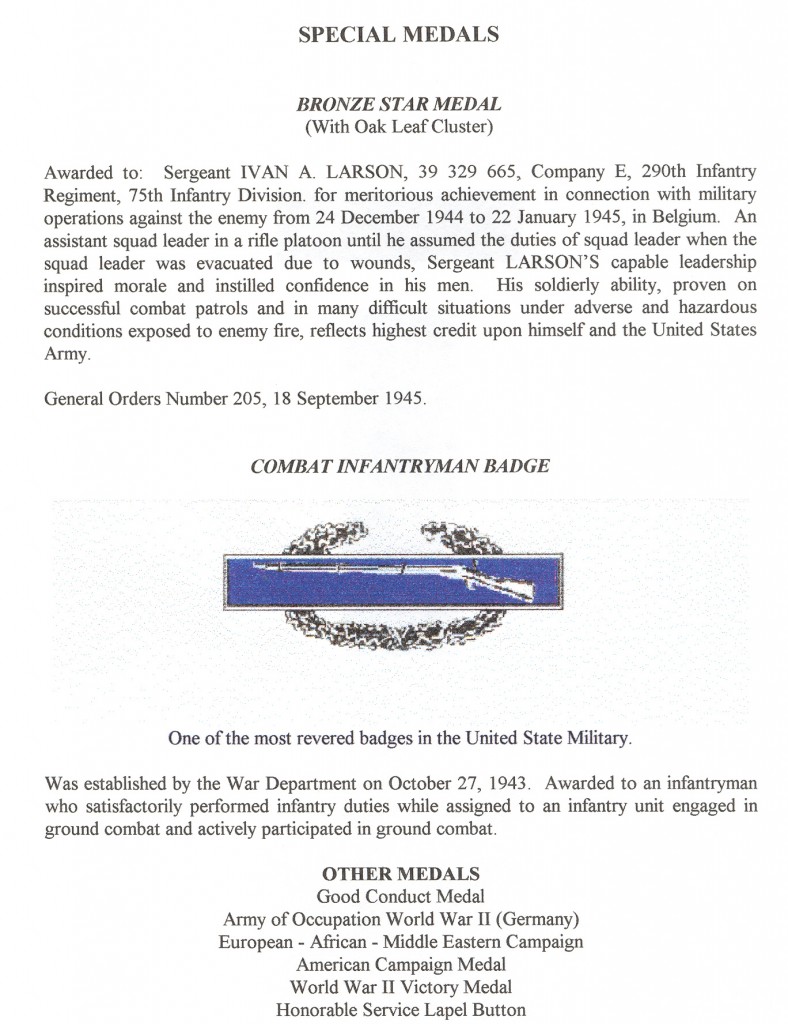 In the future, I plan to post en extensive profile on each of the five Larson “boys,” including the complete autobiographies of Vernon and Ivan, and recollections by family members of the others.

One other veteran uncle I need to mention is Great-Uncle Smith Larson, who saw combat it the Battle of St. Mihel near the end of WW1, became sickly immediately afterward, and died in hospital 2 – 1/2 years later. Family lore has it that he was a victim of poison gas, but I have been unable to find documentary evidence of it.

So, hats off to these veteran uncles, living and deceased, and a blessed Memorial Day to all.