When cousin Gail Myers first introduced me to the “Lawrence Myers Bible,” he explained that it was passed from the Lawrence Myers in one generation, to the next Lawrence Myers. Also, that the two were often, but not always, father and son. However, neither Gail nor I had a clear picture of just who the successive “Lawrences” were during a substantial part of the 19th century; there was a gap of several decades in the Bible pages themselves. I think I now have it sorted out.

The first Lawrence Myers was born in Germany, probably in 1754, and after serving as a Revolutionary War officer, became a prominent figure in the Wyoming Valley of Pennsylvania. That was before the “Lawrence Bible” came about. But that individual died in 1810 without “issue” (children), leaving his considerable estate to the heirs of his brother, Philip.

Not coincidentally, one of Philip Myers’ sons was named Lawrence, born in 1794. This was the one who founded the town of Sunbury, Ohio (together with his brother William) and who purchased what would become the heirloom Bible in 1827, two years before his death. But the next descendant named Lawrence listed in the Bible’s pages was Gail’s father, who was not born until 1879. He was a great-grandson of “Lawrence of Sunbury,” so there were two generations missing.

Last year, Gail sent me an article from the “Sunbury News,” dated 28 Apr 2011 (for larger print, click on the image). It profiles a grandson of “Lawrence of Sunbury” named Lawrence Armstrong Myers: 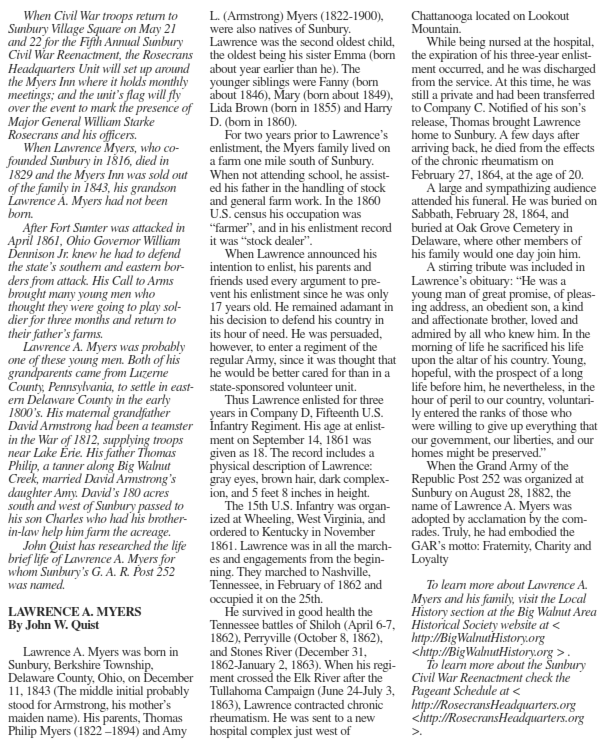 An interesting story, to say the least. Like his uncle, Lt. Henry B Myers, this twenty-year-old fellow perished in early 1864, from a chronic disease acquired in Civil War service. But getting back to genealogy, the newly “discovered” Lawrence (the only one so far known to have a middle name) was “Lawrence of Sunbury’s” grandson. So, what of the intervening generation? Well, it was hiding in plain sight. Stay tuned.