But which Lawrence Myers is it? It must be this guy, who was not on my radar at all, until this month. 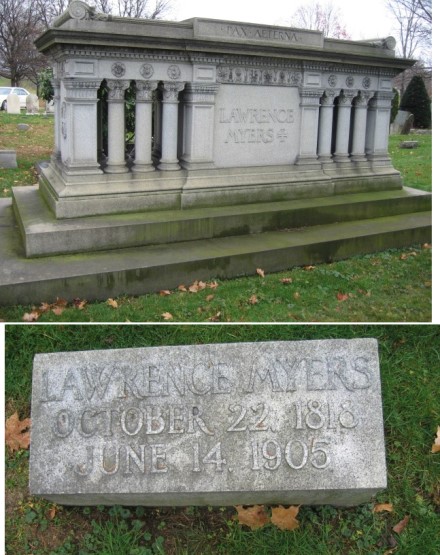 This impressive monument has undoubtedly been observed by other researchers in the Myers family, but it has escaped my attention until now. This “Lawrence” was the son of John Myers, one of Philip’s sons who remained in the Wyoming valley. Lawrence was a highly successful real estate broker; specifically, coal lands made him one of the wealthiest men in Luzerne county, according to his obituary.

The fourth Lawrence was the aforementioned Lawrence Armstrong Myers (1844-1864), the only one in the succession with a middle name, as far as I know. As we saw, he died of Civil War-related illness at age 20. That brings us to Gail’s father (1879-1937), brother of Dan Myers, and thus my great-uncle. From then on, the name has passed from father to son for three more generations, the most recent born in 1986.

Now, getting back to the photo at the top of this article: The heyday of tintype photography was from the 1860s to about 1900. The clothes suggest that this one was taken quite early in that period, probably before 1880. The only “Lawrence” who was living during any of that time was the Luzerne county real estate man, so by deduction, it has to be him. I am hoping to eventually find other photographs of that individual to compare. The only one I have so far is a very unclear copy of his obituary photo from 1905, which is not suitable for comparison. The only features easily made out are a bald head and a mustache and goatee, making him look more like cousin Gail(!) than the full-haired, clean-shaven man above. But the only other possibility is that whoever wrote “Lawrence Myers” on the frame of that tintype was mistaken, and the guy in the picture was not so named at all. As I like to say, “stay tuned.”

One “Lawrence” shares the given name, but is not part of that chain, or perhaps is an new link. More on that in a day or two.

Filling the Gap
One Last Lawrence