This thread has two purposes: it is a “pre-quel” to the founding of Sunbury, Ohio by Lawrence and William Myers, and it gives some detail about another ancestor, Maj. Thomas Brown. Also, it serves as a reminder that the lives of these pioneers could be not only hard, but complicated.

As we saw in a previous post, the early settlement of Berkshire Township, Delaware County, Ohio, was largely the work of one man: Moses Byxbe, previously of Lenox, Berkshire County, Mass. 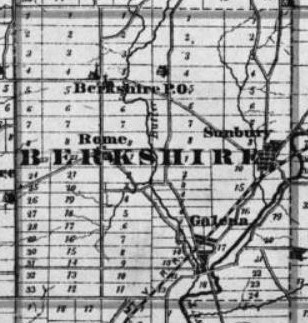 The above map is from History of Delaware County and Ohio, published by O.L. Bastion & Co. (1880), available free by clicking the link.

Col. Byxbe himself is the subject of a more recent study, Moses Byxbe: His Impact and Image, by Ray Buckingham (1979), also available free. Byxbe is regarded as something of a hero in some quarters, but soon after arriving in Ohio, he double-crossed his early investors, creating some powerful enemies.

As you recall, Thomas Brown (later “Major” Brown), was among the first group of settlers, arriving with his family in 1805. There were many other families in this first wave, with dozens more arriving in the next year. Moses Byxbe was busily selling off parcels of his 8,000 acres, at prices attractive to his buyers, yet most profitable to himself. As part of his sales pitch, Byxbe enthusiastically stated his intention to use his considerable influence to make “Berkshire Corners,” as their town was to be called, the county seat of a whole new county not yet formed, and perhaps even capitol of the brand-new state of Ohio. This, of course, would make their properties immensely more valuable. For all we know, this may have been his sincere intention, early-on. The town was surveyed and platted in 1805-06 by Byxbe’s trusted friend and surveyor Azariah Root, but mysteriously, the plat was never officially registered.

Meanwhile, unbeknownst to his settlers, Byxbe quietly sold off nearly all of his Berkshire land, and secretly entered into partnership with a certain Judge Henry Baldwin of Pittsburgh, PA. Baldwin had title to, but had never visited, some 16,000 acres at a prime riverfront locality about ten miles west of Berkshire. In 1807, Byxbe and his family moved out of Berkshire township to the new location, which was to become Delaware City (and the county seat, due in large part to Byxbe’s lobbying).

This was a most unwelcome development for the Berkshire settlers, and Thomas Brown emerged as their leader. Brown and his followers opposed Byxbe’s moves at every turn, some of which involved their own underhanded dealing and double-crossing. Ultimately, they failed; Delaware City blossomed, and Berkshire Corners never got to first base.

Part of the kerfuffle involved Thomas Brown’s campaign to be Major of the county’s militia. His opponent was none other than Moses Byxbe, Jr(!). It seems that this was an elected position, and that the junior Byxbe (albeit with baggage of his own) won the election, but that Brown challenged it at least twice. According to a scathing letter written by Byxbe Jr. (not necessarily reliable),  on one occasion Brown’s followers appeared with their muskets loaded and primed.

By means of another unscrupulous maneuver, Brown did manage to be appointed Major by the governor, but lost the post within weeks. This seems to be the sole basis on which Thomas Brown could have claimed the title of Major. He served sporadically in the War of 1812, but never rose higher in rank than Sergeant. I am still investigating how his son, Thomas Jefferson Brown, came by the title of “Colonel” before his death at age 29. I am also studying how this story must connect with the founding of Sunbury almost a decade later in 1816, coincidentally the same year that the defeated “Major” Thomas Brown passed away. Stay tuned.