After my previous post, I dug for more details on Atley Pederson (b. 1896). In 1943, he married Della E Cozak (maiden name), a widow whose surname at the time was Scofield. 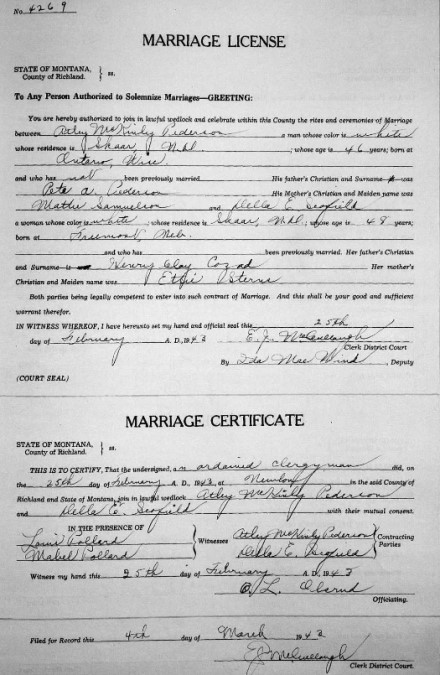 Since Della was 48 years old (Atley was 46), we can surmise that the adult children in that 1952 movie were from Della’s first marriage.

From the Social Security Death Index, and the Oregon Death Index, I learned that Atley died on 09 Apr. 1981 in Polk County, Oregon, and that his spouse’s name was Bessie. So, I searched for his second marriage, which was to Bessie Whitney, 12 Sep 1977, in Winnemucca, Nevada. (Atley was 81 years old at the time.)

For a lark, I tried tracing Atley’s father back a few generations. From US census and other records, “Pete” Pederson was born in Wisconsin in 1860; and his father, Arne Pederson, was born in Norway in March 1829. That was enough information to search for Arne’s birth using my two-step method. First, on FamilySearch.org, I pinpointed the most likely suspect, born in Øyer parish (which includes Tretten), 08 Mar 1829, to Peder Olsen and Anne Michelsdatter. Hmm – those names sounded vaguely familiar …

On the second step, the churchbooks at Digitalarkivet of Norway, I got quite a surprise.

Eureka! Arne Pederson was a brother of Marit Pedersdatter Glømme-Ødegaarden, the mother of both my great-grandmother Anne Samuelsdatter, and of Atley’s mother, Mattie Samuelson.

In other words, Atley Pederson’s father and mother were first cousins, both related to us Larsons via the Samuelsons. Will wonders never cease?

On May 14, I will embark on a 3-week journey via Amtrak trains and rental cars, to ancestral sites I have never visited in Maryland, Pennsylvania, Ohio, and Illinois, plus revisiting some sites in Wisconsin and North Dakota. Stay tuned for reports from the field.