Monday, May 20. Itinerary calls for boarding morning eastbound train in La Crosse (there is only one), riding to Chicago to change trains, then traveling all night to reach my Maryland destination the next morning. I am in a big hurry, because I am supposed to meet cousin Paula Aldous there to do some work together. Paula’s schedule requires her to leave the following day.

Not. The train was approaching La Crosse one hour late; no problem as there was a three-hour pause in Chicago before my next train. But, the Mississippi River bridge malfunctioned due to a lightning strike the night before,stranding the train on the Minnesota side for over two more hours. By the time we reached Chicago, the Maryland train had gone. Only hours into the tour, and I am suddenly a full day behind schedule.

At least, Amtrak was required to pay for hotel rooms for all fifty or more of its stranded passengers. But since all downtown hotels available to Amtrak were full, we took a charter bus to a Holiday Inn in the far suburbs.

With my plan to meet Paula down the tube, I decided to change the order of the next few stops. First, with all of Tuesday to kill in Chicago (until the 6 PM train), I took a commuter train downtown, where I rented a car to drive to the two cemeteries I had planned to visit on the return trip.

In a suburb just south of Chicago proper was Evergreen Cemetery. 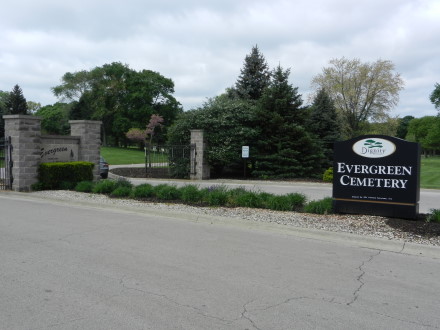 A friend in Bend asked me to search for an ancestor of hers in this huge graveyard. I had the plot number, so the cemetery staff gave me a map with the correct location marked. Finding the approximate spot was easy; unfortunately, there was no marker for my friend’s ancestor. In fact, in the surrounding three rows, containing 240 numbered plots, there were only about 30 stones in all. The trip was getting off to an inauspicious beginning.

About 50 miles southwest of the city, in Manteno, Kankakee County, I had better luck at Elmwood Cemetery. Driving south, I was struck by the abrupt transition from suburban apartment blocks to vast open fields. 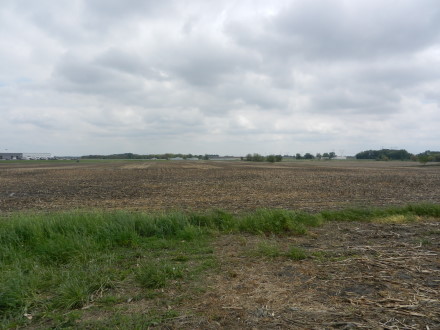 The cemetery, like most I visited, was well-kept, with many graves decorated for the upcoming Memorial Day weekend. 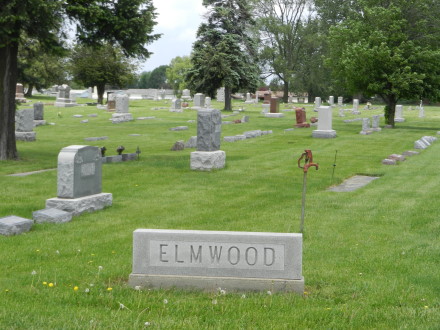 The local historical society had sent me a map, so I easily found the grave of Peter Drayer (1830-1900) and Mary Jane Zepp (Drayer), great-great grandparents on my mother’s mother’s side. 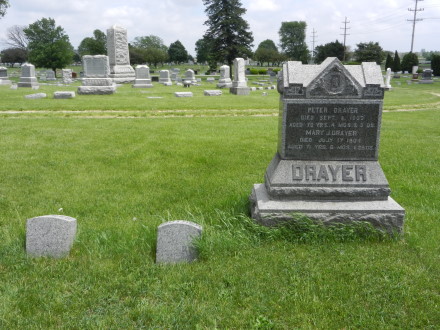 This grave had previously been photographed (at my request) by a Findagrave.com volunteer, but I was pleased to be visiting it in person for the first and probably only time. From this point on, my searchings, especially at cemeteries, were much more successful.

Back in Chicago, I returned the rental car and boarded the 6 PM train for Cleveland, Ohio, arriving in that city about 3 AM Wednesday. Next: the “famous” Myers families of Ohio, and an honorary cousin there.