We are still at Mount Olivet Cemetery, examining the massive Myers monument and associated grave markers. 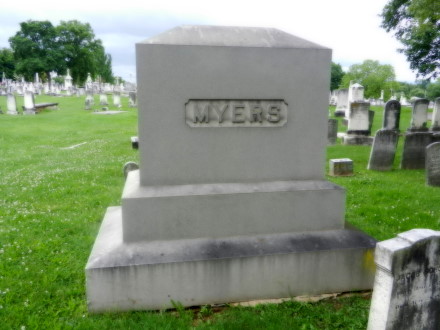 To reiterate, this stone is about 7 feet high by 6 feet by 4 feet at the base. It must weigh several tons, and dates from a much later time than the deaths it commemorates. On one of the narrow sides, at the base, is the inscription we examined previously, for Michael, his wife and an unmarried daughter. On the base of the wide side of the monument opposite the view above, are inscribed the names of several Myers relatives. Let’s begin with Thomas Jefferson Myers (1812-1850), the only one of Michael’s sons to stay and raise his family in Maryland. Another son, Madison  Fout Myers (1810-1859), moved to Pennsylvania, and will be examined later on this journey. 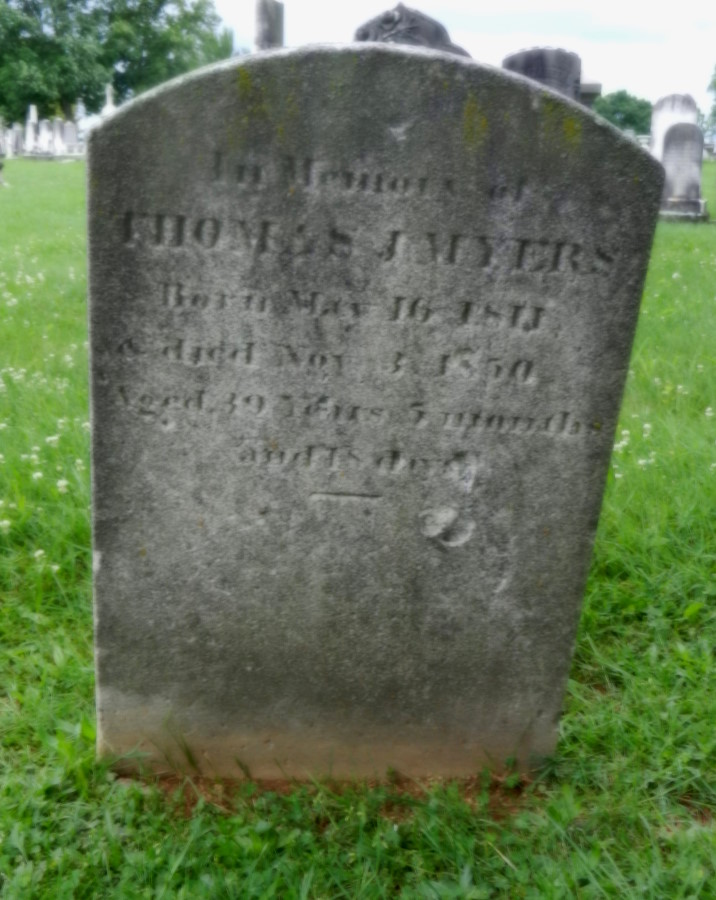 This stone is quite readable for its age. Especially clear is the birth date, May 16, 1811. Trouble is, I had already seen the microfilmed record of his baptism from the Lutheran congregation at Middletown, Frederick County, MD:

I have used this as the primary date in my data – gravestones have been wrong before. The only thing shaking my confidence is, the handwriting looks much too neat for such an early date; I suspect this may be copied from an original that was not necessarily very legible. So in this case, I’d say the date is a toss-up, so far.

On the same film was the marriage of “TJ” to Catherine Scholl in 1833. 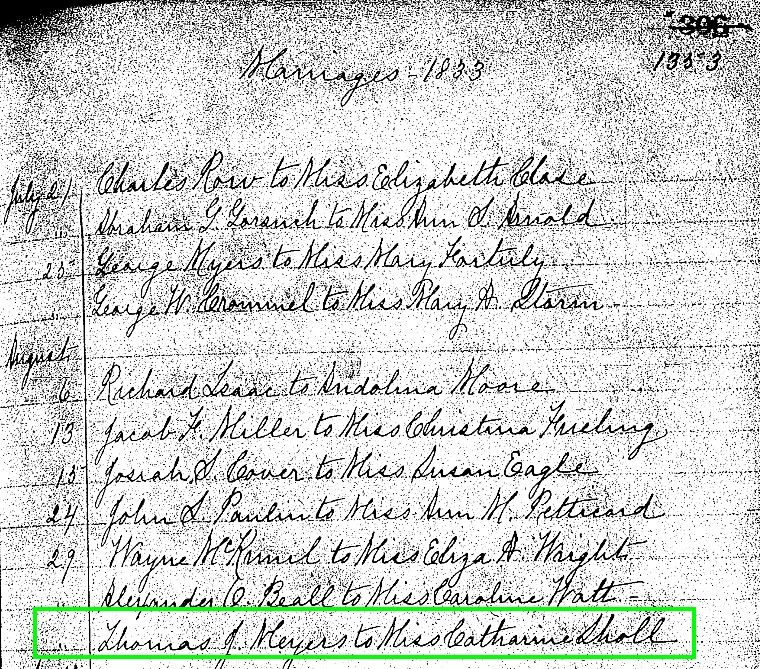 Note the alternative spelling; the gravestones all say “Scholl;” to wit, the other narrow side of the big stone:

Pending further evidence, I am tentatively assuming that John and Elizabeth Scholl were Catherine’s parents. This “Elizabeth Fout” is not Michael Myers’ wife, obviously. Their individual headstones clarify the relationship. 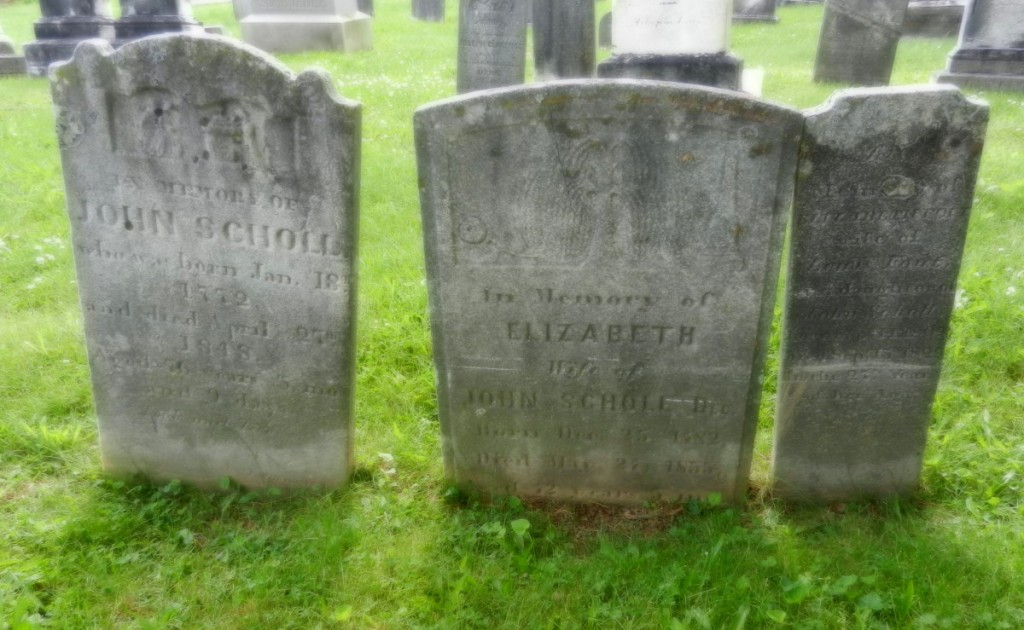 If you click for a closer view, you can read that the slim stone on the right is that of “Elizabeth Fout, Wife of Louis Fout, and daughter of John Scholl.” I don’t know who Louis Fout was, but just maybe he was related to Michael Myers’ wife, also named Elizabeth Fout.

I have information on three children of Thomas J and Catherine S Myers, although I am pretty sure there were more. Not in birth order, they are Cleopatra Myers (b. approx. 1837, per the 1850 US census), Triviana E Myers (1849-1861 per inscriptions below), and Talleyrand Desaix Myers (1848-1929), the link to at least one living descendant, whom we will discuss in the next post. Note on the first photo that Eugene Moreau Myers must have been another son who died as a child, but no further info has surfaced. This is the fourth and last inscription on the base of the large monument. 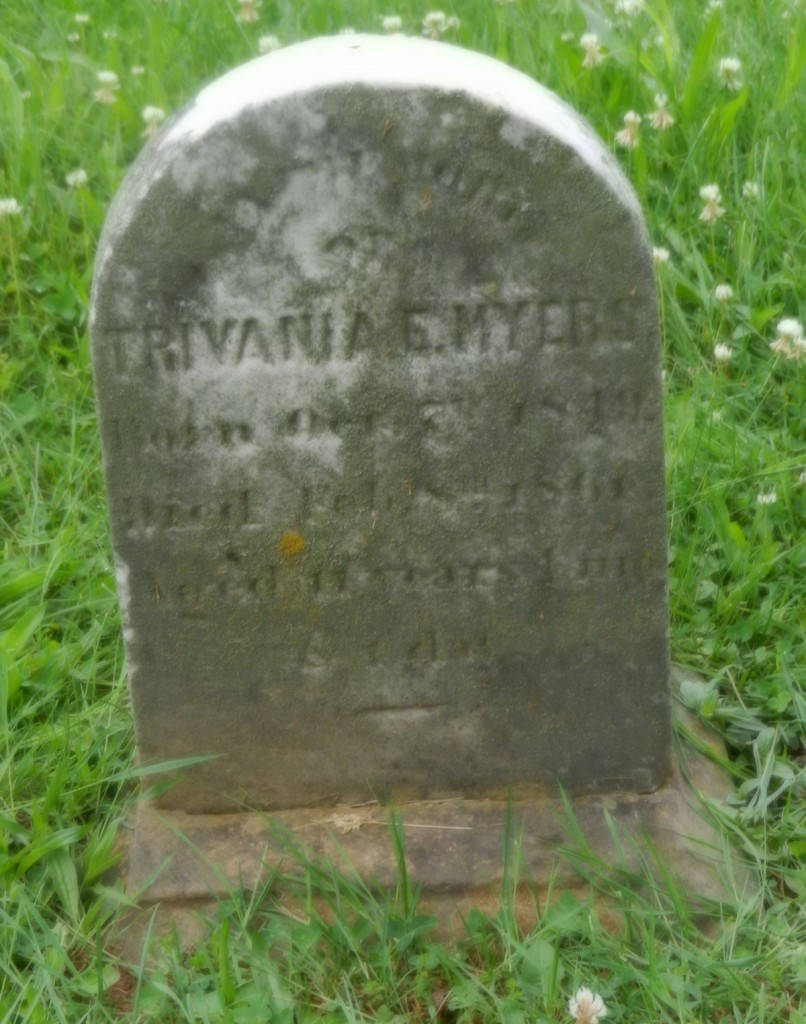 Next: the French Connection?