Michael Myers‘ son Thomas Jefferson Myers apparently became quite wealthy as a miller in Buckeystown, a historic community several miles upriver from Michael’s farm near Creagerstown. Evidence of his wealth can be found in this entry for the US Census of 1850 (just months before Thomas’ death). 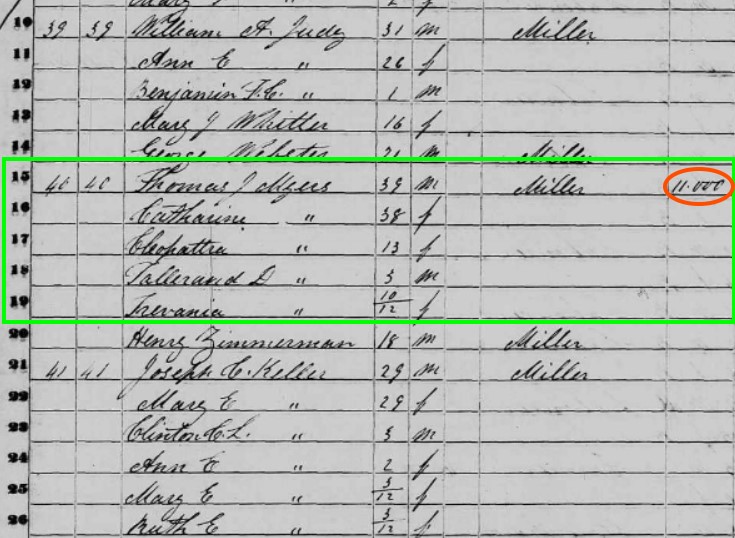 What evidence, you may ask. First, note the figure “11,000” outlined in red. This represents the dollar value of the householder’s real estate. It is a very high figure indeed by 1850 standards, probably the value of a thriving grain mill, plus a substantial home. By contrast, note that the other four “millers” on the page, including two heads of household, own no real estate. This suggests to me that they all were Thomas’ employees. In addition, the “Slave Schedule” of the same census shows that Thomas owned nine slaves, six of whom were younger than eleven years(!)

Another hint at the family’s wealth are the rather exotic names of Thomas’ children, especially his only known son. A great many male children of the early 1800s were named after a central figure in the American Revolution, including another ancestor we saw in an earlier post. It is significant that Thomas Jefferson was still living, and the Revolutionary War a vivid memory, when his two namesakes of interest, Myers and Brown, were born. But Thomas J Myers’ son, Talleyrand Desaix Myers (1846-1929), is quite another matter. Below is the final inscription on the massive Myers monument in Frederick. It appears on the large upper face, opposite from the family name “MYERS.”

His namesakes, Charles Maurice de Talleyrand-Périgord and Louis Charles Antoine Desaix, were central figures in the French Revolution and its aftermath, an ocean away from rural Maryland, and a half-century in the past by the time of this child’s birth. Hardly household words in America, then or now. It would seem that “TJ” Myers must have been well-educated and/or intellectually inclined.

This certainly was true of his son Talleyrand, who attended medical school in Philadelphia and enjoyed a long career as a naval physician. It appears he was in medical school during the Civil War, and was spared the necessity of choosing sides. His wife is named in other documents as Mary Brown. Presumably, Mary must be what the “M” on the inscription stands for, and Brown was her maiden name. This is corroborated by the middle name of Talleyrand’s son, Desaix Brown Myers (1882-1962).

From that point, we enter a repeating loop, as one of Desaix’s sons was Desaix Brown Myers II (1914-1992), and then there was Desaix B Myers III (“Terry”), who is living today, and well-known in academic and government circles as a published author, Foreign Service official, and currently professor of Foreign Policy at the National Defense University in Washington, DC. I have not had the pleasure of meeting Terry yet, but cousin Paula Howell took advantage of my failure to make it to our planned meeting in Frederick to meet with Terry at his office in Washington.