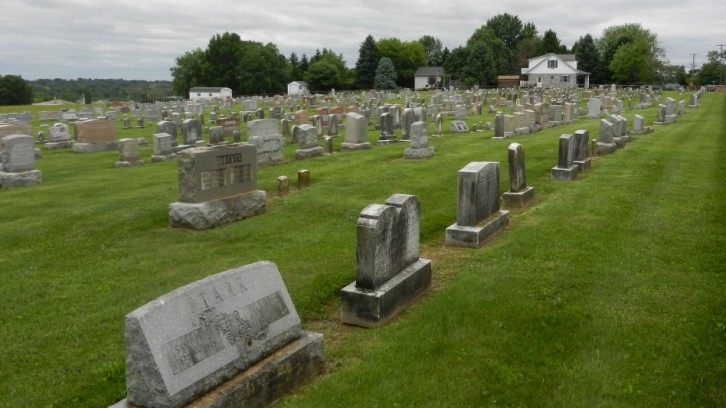 Day of the Brethren, part 2

Still May 24. Eighty miles northeast from Sams Creek, in Lancaster County, PA, is the Mohler Church of the Brethren, outside the town of Ephrata. As explained in this Wikipedia article, Lancaster County was at the center of “Pensylvania Dutch” (German-American) communities, including many who immigrated for religious freedom, be they Brethren, Amish, or others who were persecuted in their home country. 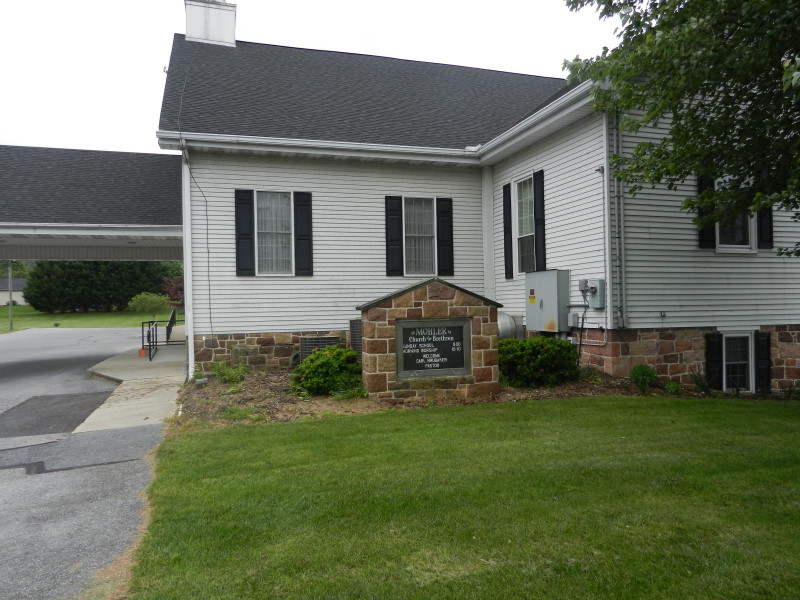 The church is obviously still active, holding weekly worship services and Sunday school. The building is relatively modern, but to assess the age and importance of the congregation, look to the graveyard.

I estimate there are well over a thousand graves here, perhaps twice that. I had seen photos of some of the monuments I was looking for, but did not know their locations, so began working my way across the front, examining the first several rows of stones, and photographing all those bearing the name Mohler. By the time I reached the familiar monuments, I had covered less than a quarter of the cemetery, and photographed over 50 Mohler graves. It seemed like half the graves were Mohlers! These were relatives of my wife Thiel’s great-grandmother, Mary Eleanor Mohler (Beechel). Below is the grave of Ludwig Mohler (1696-1754), traditionally considered to be the patriarch of the clan. The modern stone (c. 1920) is a direct translation from the original stones’ German inscriptions. 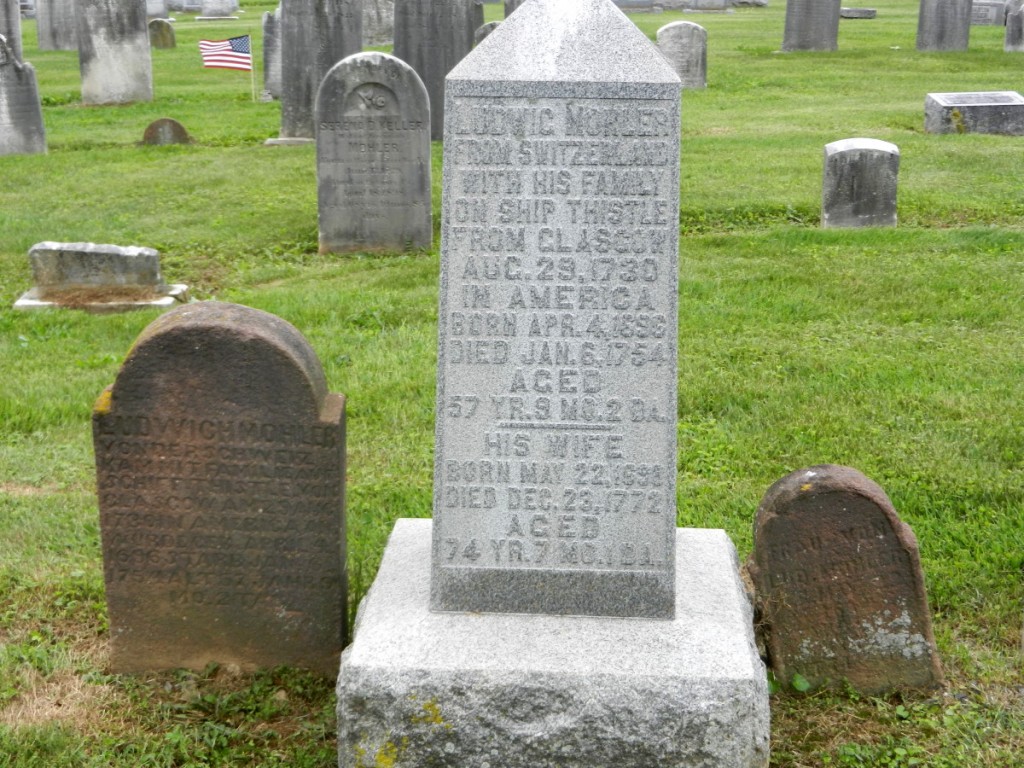 However, more recent research by family members points to another man, Henry Mohler “Senior,” whose grave location is unknown. Those relatives have erected a cenotaph (monument without a grave) a short distance from Ludwig’s stone. For an explanation of the controversy, see this Mohler Family Tree page. 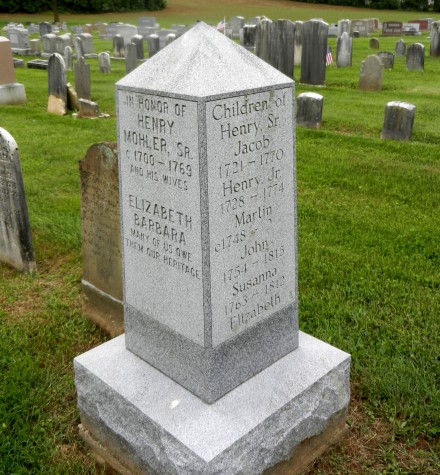 Whichever of these individuals was the patriarch, was Thiel’s 7th great-grandfather. Next in her line was Henry Mohler (1728-1774), called “Henry Jr.” on the stone above. His life and lineage is well-documented. Here is his individual gravestone, which is older than the monument above, but probably not as early as 1774. 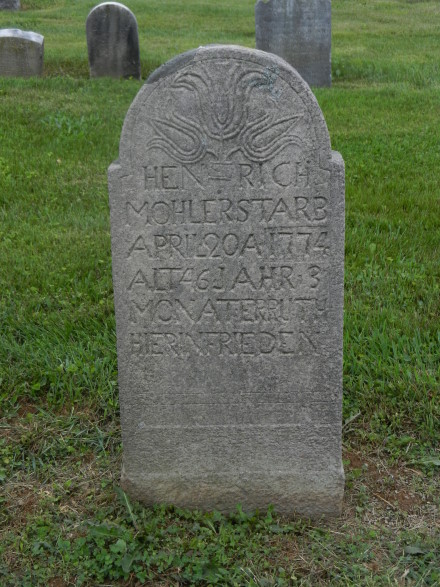 A daughter of Henry’s, Rebecca Mohler, Married John S. Studebaker, and was the mother of John Mohler Studebaker of automotive fame. Note that he shares both first and middle names with my wife’s grandfather, John Mohler Beechel (1884-1971).

Henry’s son John, or Johannes Mohler (1757-1821), Thiel’s 5th great-grandfather, like his father, lived and died in Lancaster county. His gravestone looks very old, I would guess from the time of his death. 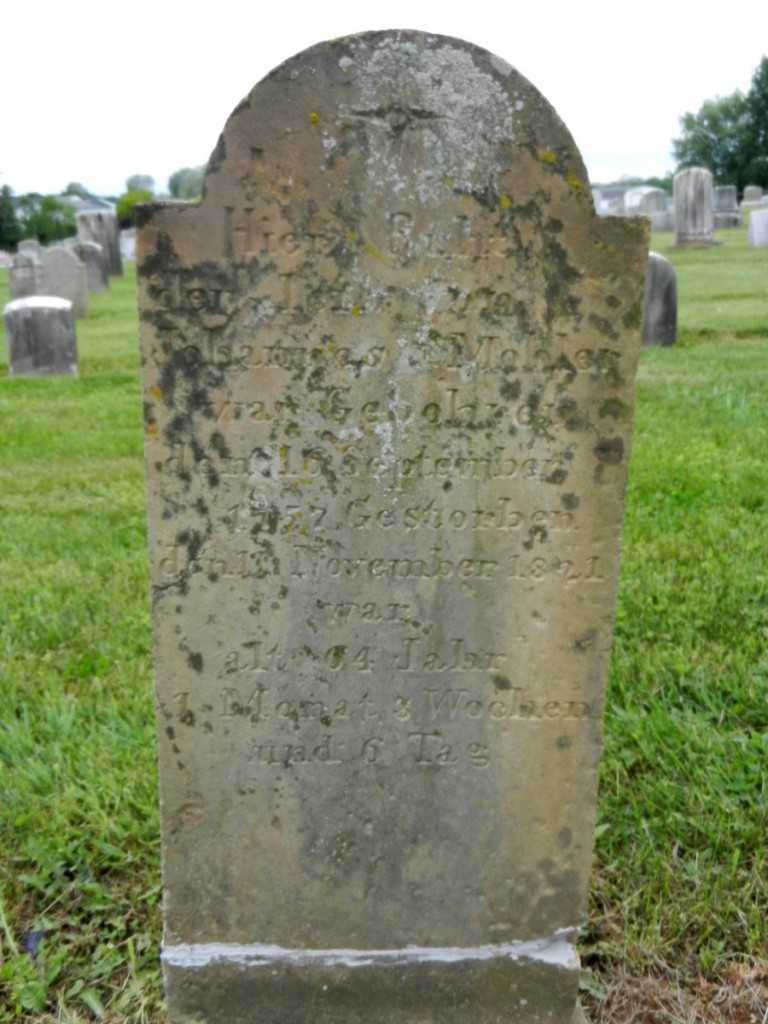 If you click for an enlargement, you can read most of the inscription.

One of John ‘s sons, Daniel Mohler (1779-1849), removed about 50 miles west to Cumberland County, PA, in the year 1800. In Upper Allen Township, near the present-day town of Mechanicsburg, Daniel and his uncle Christian Mohler founded another Mohler Brethren church. 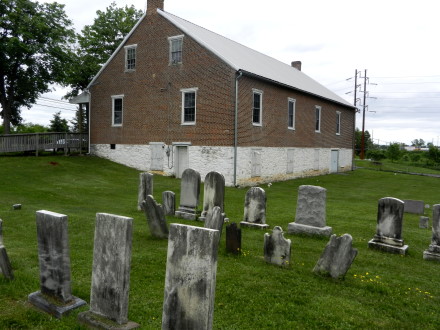 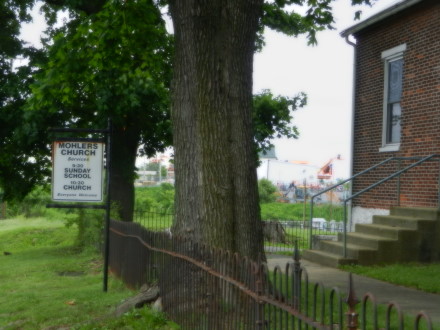 The meeting house was built in 1861, probably by Daniel’s son Solomon Mohler. Like the Ephrata church, it is still in operation; in fact, I attended Sunday worship there on my way back to West Virginia.

But I’m getting ahead of myself. Daniel is buried in this churchyard, as we might expect. His gravestone is leaning and seriously eroded, but partly readable. 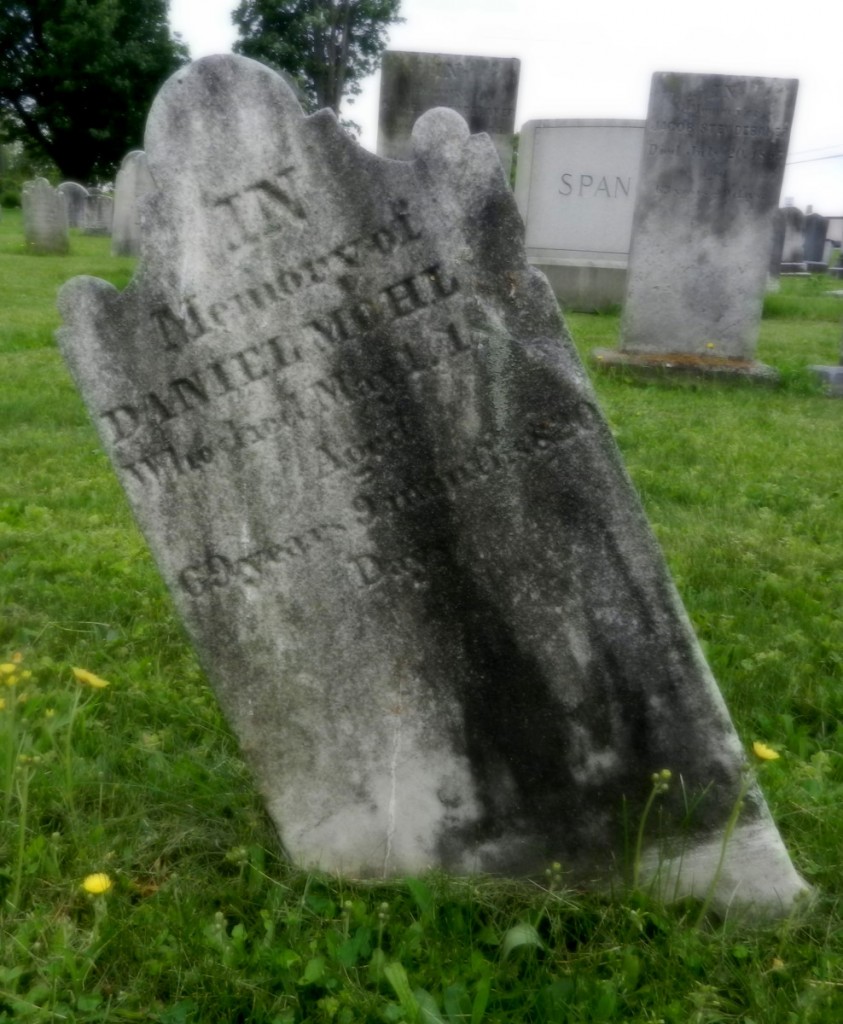 One of Daniel’s daughters, Nancy Mohler, married Jacob “Stewdebaker,” who, despite the spelling, may have been related to the automotive Studebakers mentioned above. I haven’t nailed that down yet. 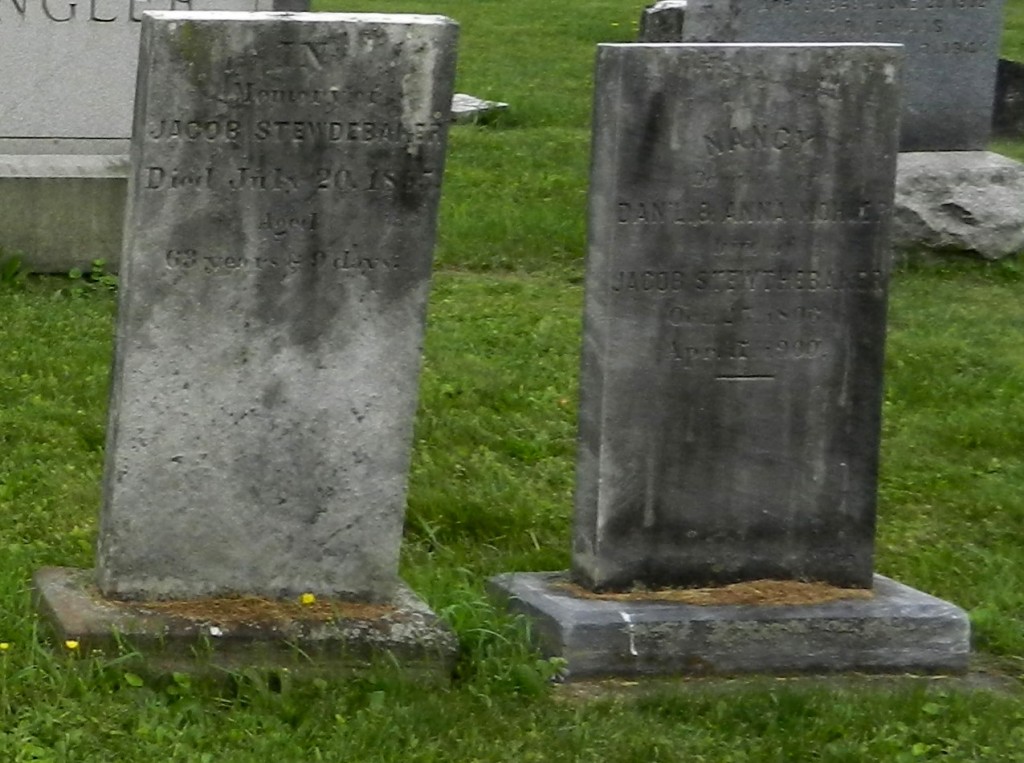 Note the two different variants of the surname on the stones of husband and wife.

But I digress, again. Thiel’s direct ancestor is another son of Daniel, John Mohler (1802-1860), whose grave I visited in Ohio two days earlier (OMG, was it only two days?? That was five blog posts ago!). 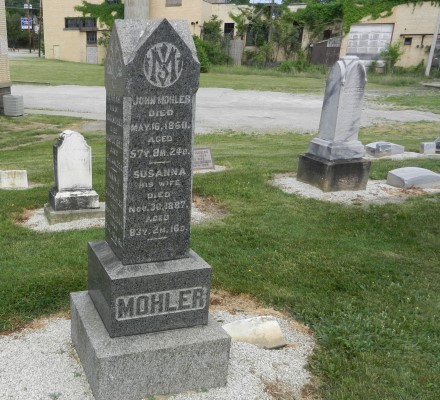 For an extensive Mohler family history, tracing the line from Ludwig Mohler all the way to the twentieth century, including Thiel and her children, click here.

And for an even more extensive family tree, click on the image below. Drawn in the 1920s, it traces all or nearly all lines from Ludwig (or from Henry Sr.), but some lines, including Thiel’s, are lost by the mid-1800s. I received this chart from Marvin Mohler of Zillah, Washington, who is still an observant Brethren (Brother?). His own line has been updated in the upper left corner. 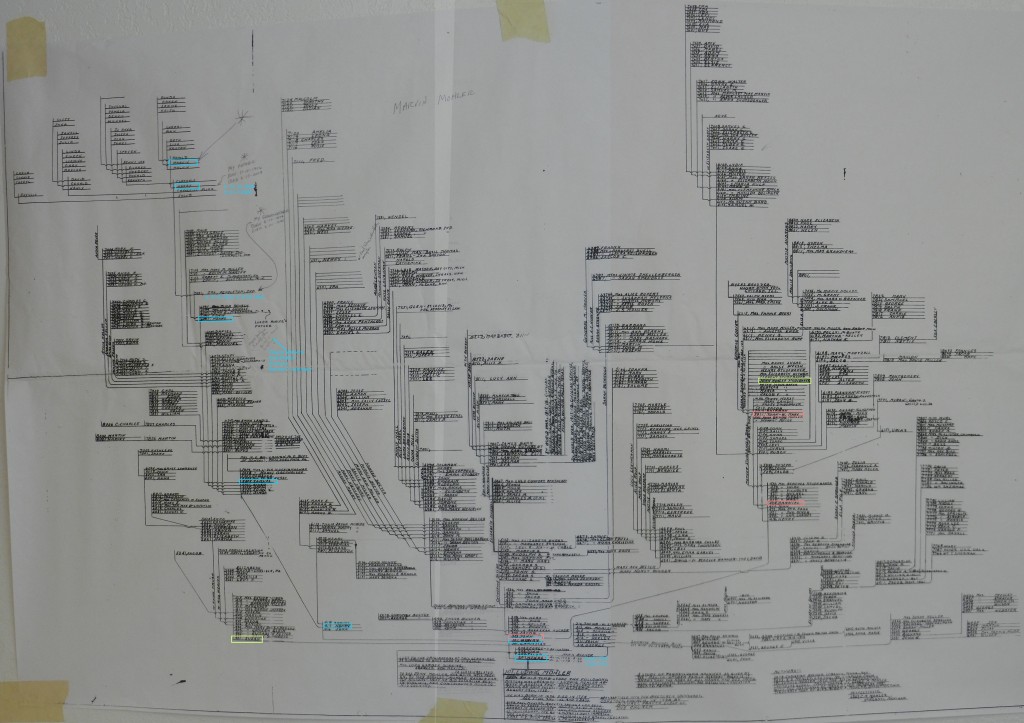 Next: the fabled Wyoming Valley of Pennsylvania.