After a welcome night’s sleep and pleasant breakfast at Tom’s house, there were several hours available before my afternoon train. We decided to spend the time scanning the documents Tom had borrowed from Melinda’s basement. With one of us placing pages on the scanner, and the other operating the computer, it went very quickly; all the scanning was finished by lunch time.

All but a few of the items dated from after the Weavers had left Pennsylvania for their new life in Nebraska. Most of these were not of primary interest to me as a distant cousin. There were some exceptions, however, and a handful of earlier documents that were quite fascinating. 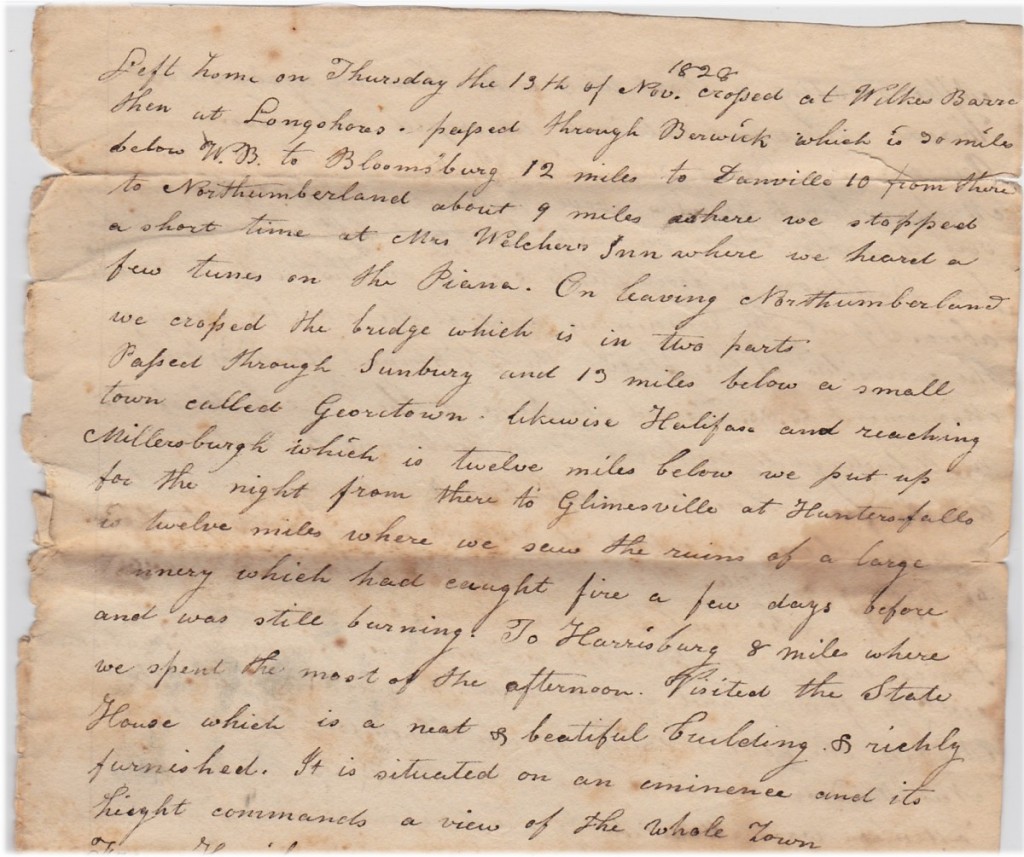 The earliest and most interesting was a six-page journal describing a round-trip journey in Nov.-Dec. 1828, from the Wyoming Valley to Michael Myers’ farm in Frederick County, Maryland. Michael himself had died years earlier; the farm was occupied by his widow Elizabeth (called “Aunt” in the journal) and children, including “cousins” Madison,  Jefferson, and Miranda Myers (not to be confused with Harriet and Madison’s daughter Miranda, born 1837). Click on the image for a closer view; for a complete 6-page, annotated PDF file, click here.

As it was in the form of a journal, rather than a letter, there was no salutation nor signature; it fact, it is unclear exactly who wrote it. By deduction, from the relationships described and from the location of “home” (across the river from Wilkes-Barre), it must be a child of Philip Myers. At first I thought it might be Harriet herself (future wife of “cousin” Madison), but I have good samples of Harriet’s handwriting (see below), and it does not match the above. And, there are subtle clues it was probably written by a male. So, one of Harriet’s brothers. The most likely would be Philip Thomas Myers (1802-1887), who would be 26 years old in 1828.

I studied this document for hours, and could write reams about it. Look for some more posts involving it, but now let’s move on to two pairs of letters from Harriet and Madison themselves. Prior to their wedding in 1833, each wrote a letter to the other upon their engagement. Here is the beginning of Harriet’s letter to Madison:

The entire page is filled with this florid language and lofty sentiments toward her fiance, and the human condition. The second page consists of a poem of classic construction. 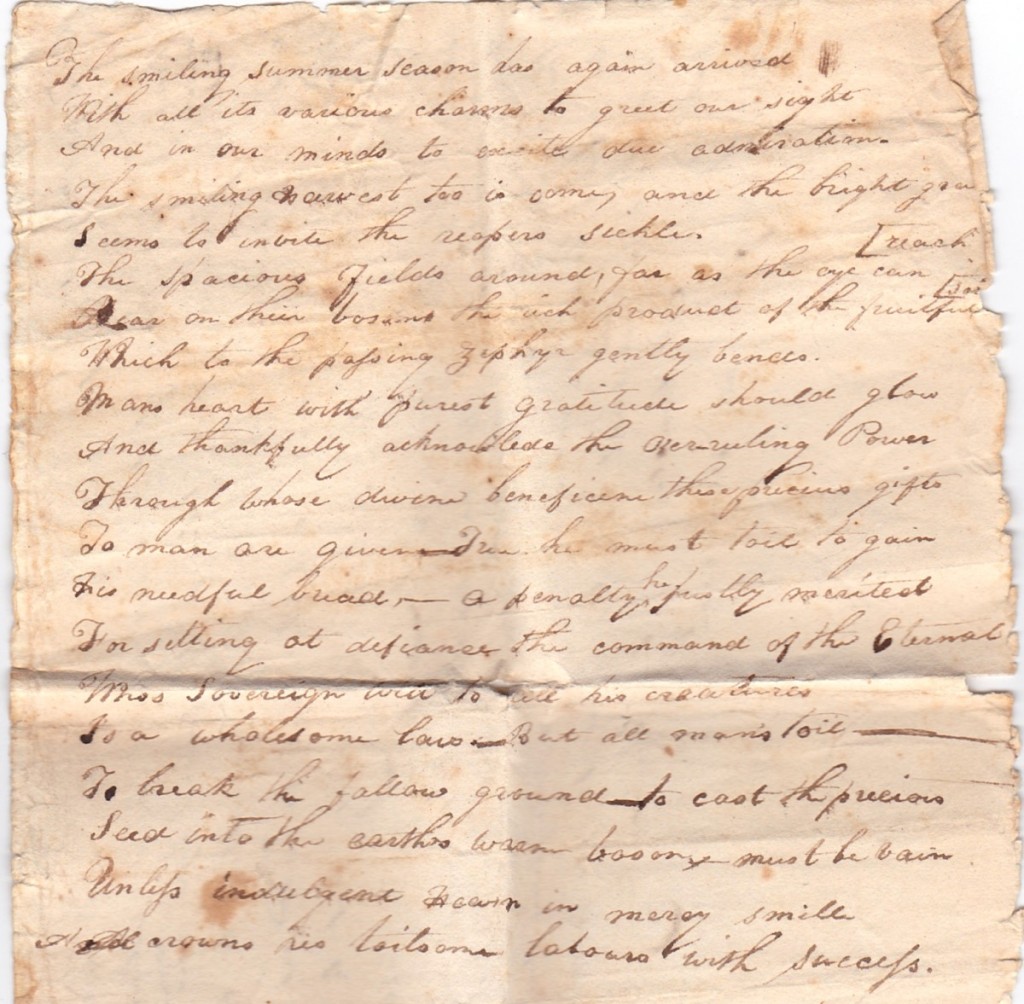 How interesting that Harriet’s daughter became friends with Longfellow many years later (see previous post). Madison’s letter to Harriet is much shorter, and while the language is equally florid, the sentiments are much more reserved (hey, he was a guy, after all). 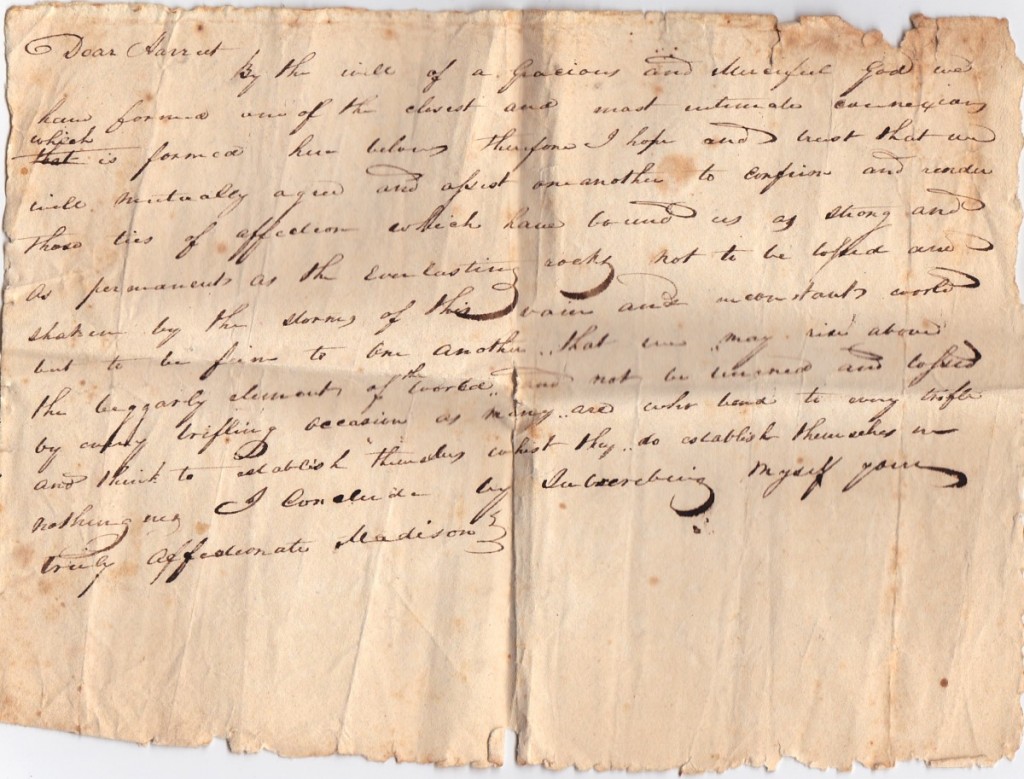 The other pair of letters were written to Harriet’s parents after the wedding in March 1833. There is one more item predating the 1860s, a set of vital statistics pages from a family Bible, with fascinating connections to another Bible we discussed months ago. After a look at those pages, the tour moves on to the Larson side of my family in Wisconsin, North Dakota, and Montana. Thanks for your patience, Larsons.