Another item from Melinda Morgan’s basement was a set of family history pages from a large Bible, which are also reproduced in the 2006 reunion book. Just the five torn-out pages, no sign of the Bible itself. 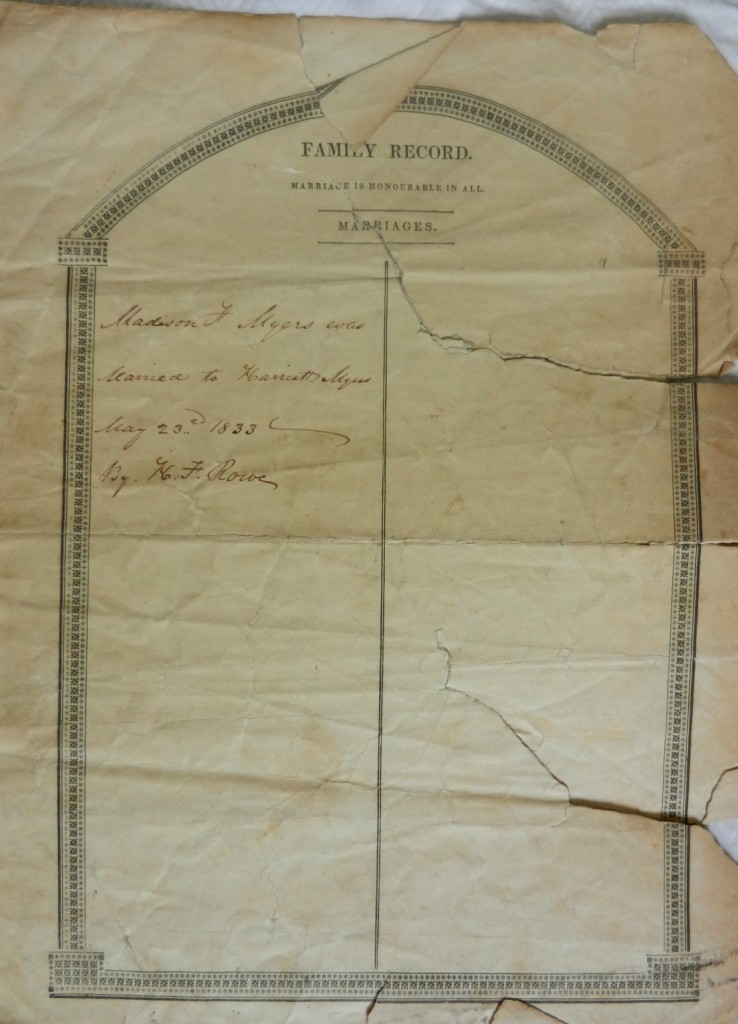 I found the pages quite remarkable, especially when compared with another, smaller, old bible which Tom Welch received from the late Charles Myers. I wrote about that bible in a post last year. 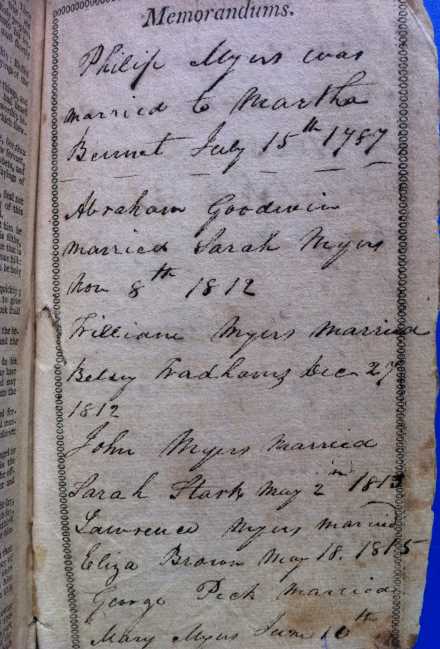 Some of the same information appears in both places, and both seem to be centered on the family of Madison and Harriet Myers. The “Charles Myers Bible,” pictured second, is probably earlier. The earliest event (probably recorded long after the event itself) was the marriage of Philip Myers and Martha Bennet in 1787. The pages go on to record the births and marriages of all ten of Philip’s children, including the youngest, Harriet. The only members of the next generation are the eldest two children of Harriet and Madison, both of whom died in infancy. Their two deaths (1835 and 1836) are also recorded, as are the deaths of only three of Harriet’s siblings, those who died prior to the two infants. Apparently, these pages were abandoned after 1836. Even the death of Philip Myers in 1835 was not recorded.

The “Melinda Morgan Bible,” on the other hand, begins with the marriage of Harriet and Madison in 1833. It lists the births of all nine of their children (1834-1850), and no others (e.g. nieces or nephews); also the deaths of all four who died in childhood (1835-1854). The only other entries are the deaths of Harriet’s parents in 1835 and 1851, as well as a page with the baptisms of their children.

It appears that this second bible served as a replacement to the earlier, smaller one. Also interesting is the similarity of the handwriting between the two. 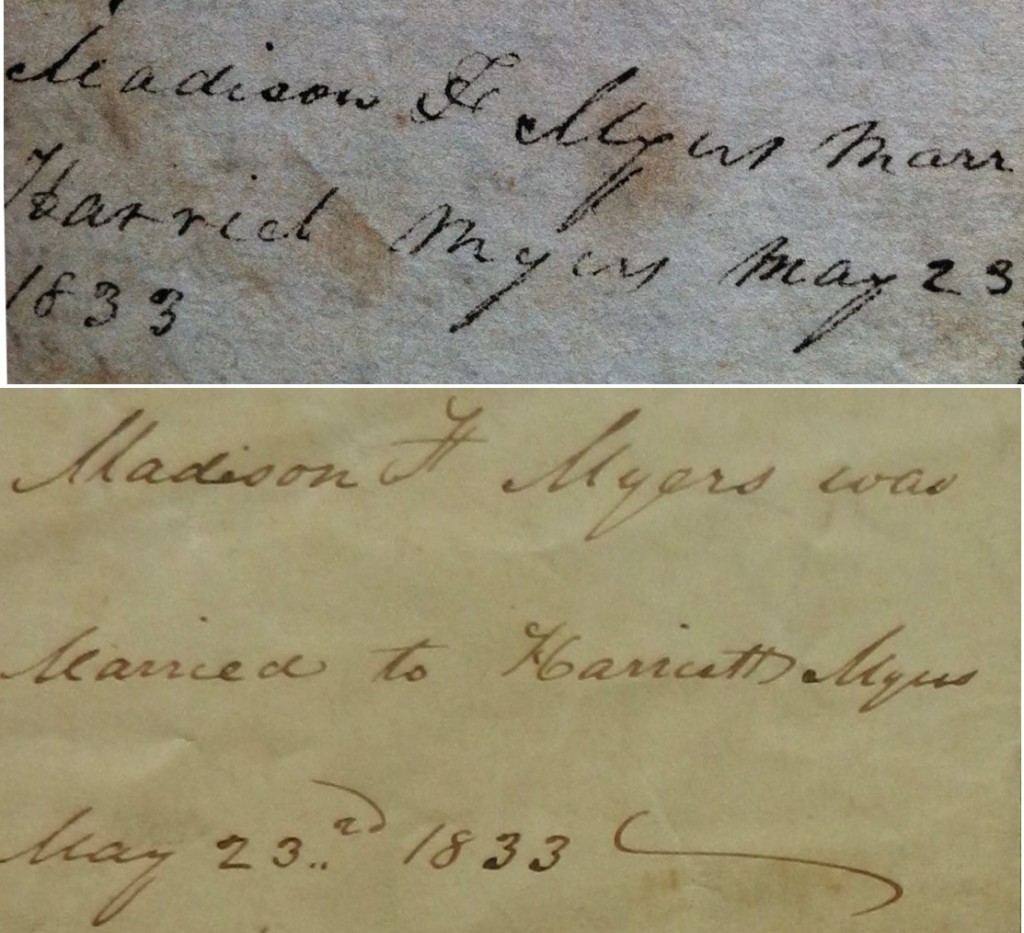 I am no expert, but to my layman’s eye, it seems likely that the same person wrote in both Bibles. I will go further out on a limb to speculate that it may have been Madison, based on two letters from him (small samples below). 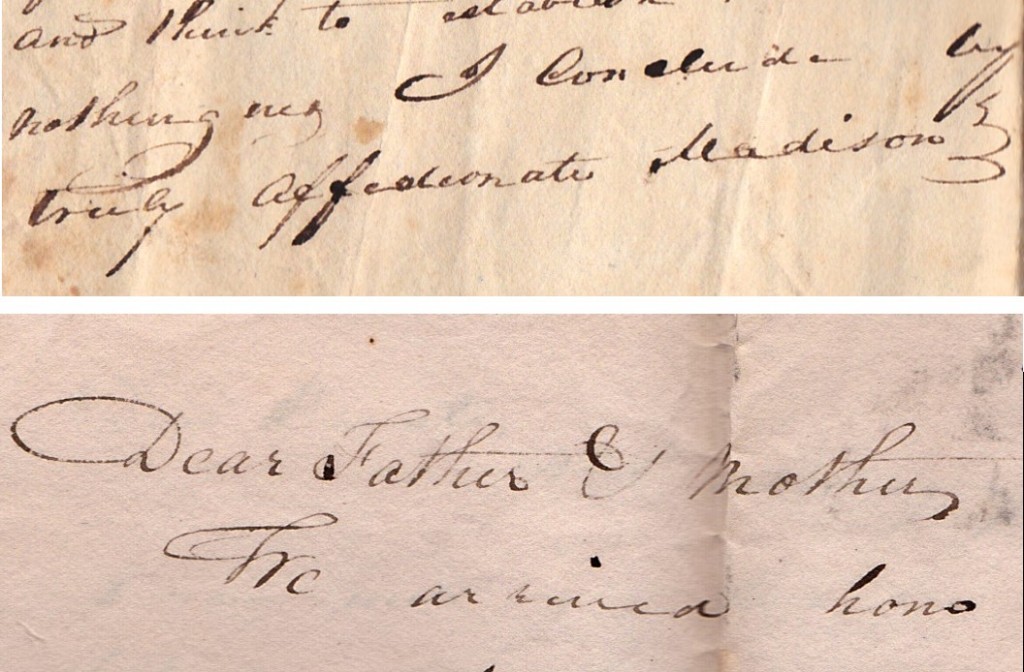 This (finally) completes the places on my journey that I was visiting for the first time. My distant but now emotionally close cousin Tom Welch dropped me off at Union Station, Chicago, in early afternoon. By evening, I had arrived in La Crosse, Wisconsin, and settled into a cheap motel. Next, we return at long last to the Larson side, and their first American home: Vernon County, WI.