I was already aware of this gravestone at Brush Creek, about fifty feet from that of my great-grandfather of the same name. 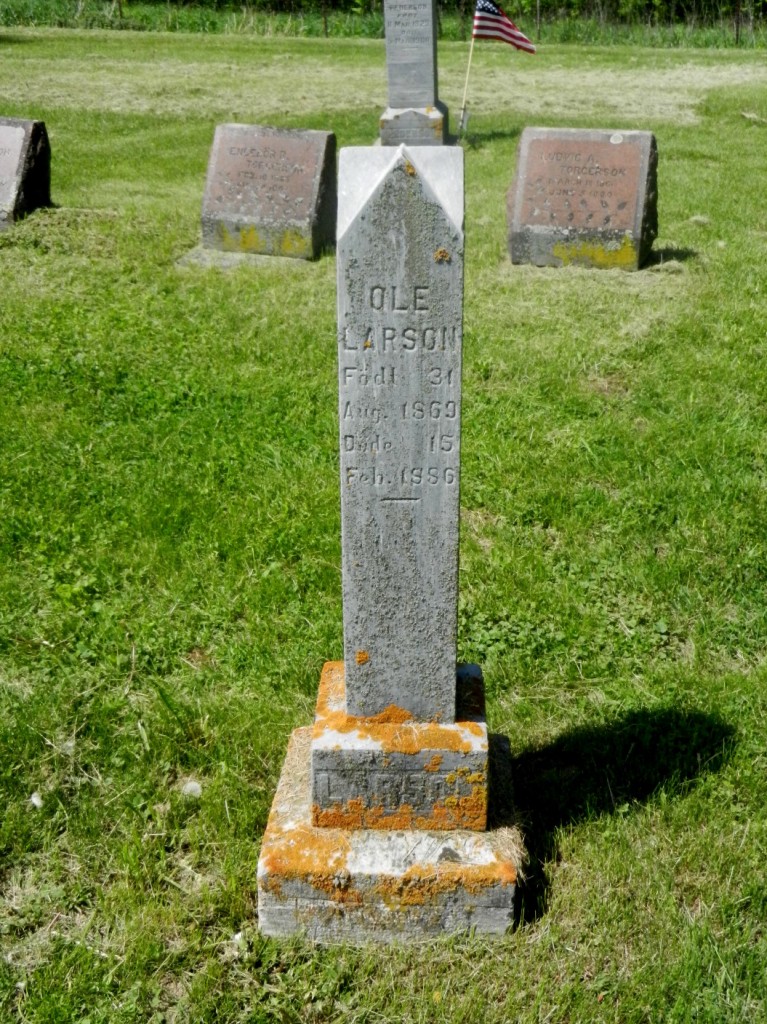 I paid it little attention, thinking it was an unrelated person with the same, very common, name. So it was a total shock when cousin Aline said, “That was an illegitimate son of Ole and Anne,” born the year before they were married, who died at age 16. Whoa! Aline was a little vague on her source for that huge closet skeleton, and I was too stunned to press her on that, or why she didn’t mention it when we toured the cemetery together four years ago.

Still, a fascinating thread, so back at home, I have been scrambling for some evidence. What I have found, though, all contradicts the idea. Ole and Anne were married on 09 June 1870. Although that was a few days after the “census day” of 01 June, they were enumerated together in the US census of that year, in Clinton Township (the location of their farm).

One-year-old Ole (junior) is not present. Even though he may have been “illegitimate,” his parents were now married, and he would almost surely be living with them. But in case not, I searched the 1870 census for all Ole Larsons approximately one year old in all of western Wisconsin. I found several; one was in the same county (Vernon), but they all lived with other Mr. and Mrs. Larson’s, with older brothers and sisters. None were likely candidates.

Likewise the 1880 Census. Ole and Anne are now shown with children Louise, Smith, and Magnus, the three who were born and still living by 1880. Again I searched western Wisconsin for any Ole Larson aged approximately 11. The only possible candidate was a boy listed as 13, living with an apparently unrelated family, over 100 miles from Vernon County. He was listed as a farm laborer(!), which suggests that the family might have exaggerated his age by a couple of years. But it does not compute that, so totally separated from his biological family, he would have been buried back at Brush Creek when he died six years later.

The only plausible scenario that comes to mind is, that this young Ole was indeed a son of my great-grandfather, but with a woman other than Anne Samuelsdatter. In that case, he may have been listed under the mother’s surname in the censuses. Still, it is a big stretch to imagine he would have then been buried here, with his father’s surname. At the same time, I did not find a likely match for this person in the census data or anywhere else, so far. My current guess is that the boy in the grave was a farm hand who came to the area after 1880. But there is no substantiation for any of these things at present. The jury, as they say, is still out.

After leaving the cemetery, Aline and I drove up nearby Norwegian Valley, where Ole’s house and the log cabin where Aline was born are still standing. Things looked about the same as four years ago; click on the links for the 2009 photos.