I planned to sleep late after my 3 AM arrival, but woke up by 8 o’clock. Well, that’s pretty late for me. At 11:00, as planned, I arrived at the apartment of my 102 (now 103) year old “Uncle Barney,” Bernard D Myers. He couldn’t have met me earlier anyway, because Fridays are one of his mornings at the gym! Barney made national TV last year for running anchor in the “over-85” 4 X 100 meter relay at the Big Sky Games. the article is still on line; advance to about 3:30 minutes in this video. And a year earlier, at a seniors’ luncheon, he was featured with Montana’s Lieutenant Governor, who was his student in high school. 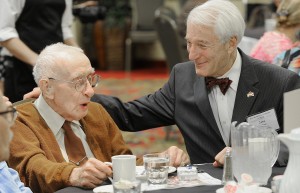 Uncle Barney is truly an inspiration. His only physical complaint is his hearing (which isn’t all that bad), and his mental acuity is remarkable. As best I could tell, he is every bit as fit as when I last saw him, ten years ago. But in addition to seeing Uncle Barney and Cousin Joyce, I was met at his apartment by two cousins who were totally unknown to me until a few months ago. 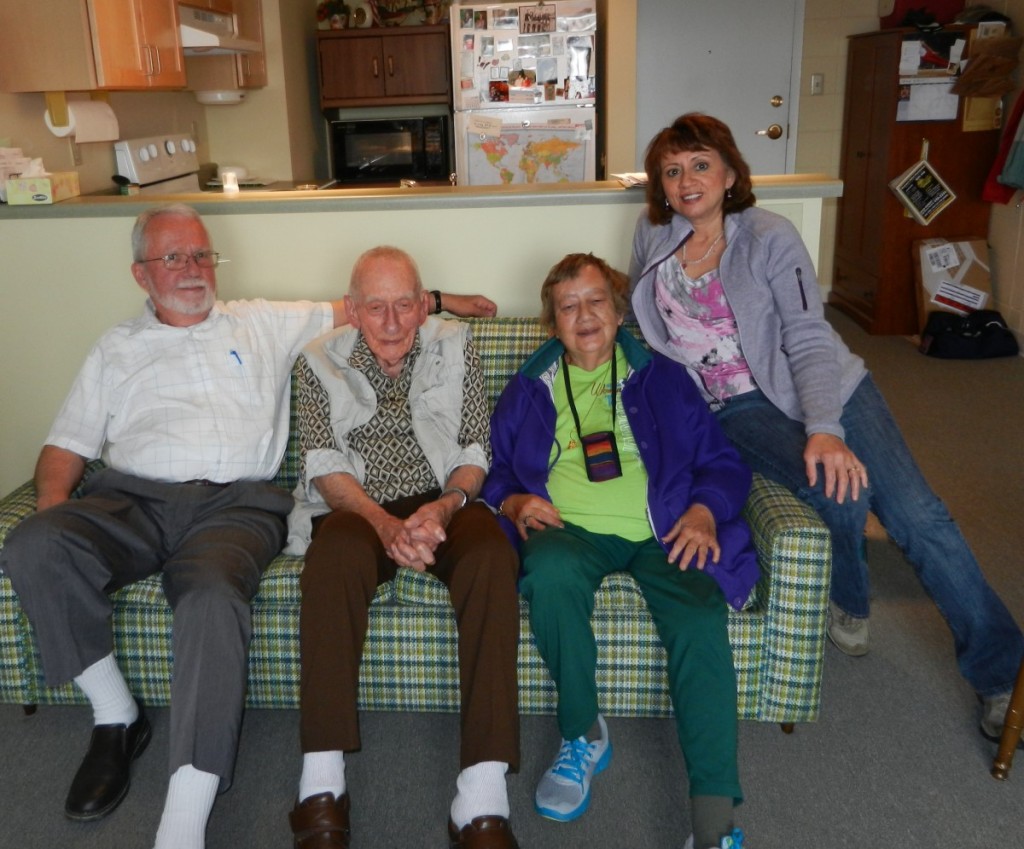 Seated next to Barney is Missy Valverde, his niece and my first cousin. On the right is Missy’s daughter, Lisa Oleson. Missy is the biological daughter of my mother’s (and Barney’s) sister Velma Myers (1917-1999). The photo below is dated 1930. 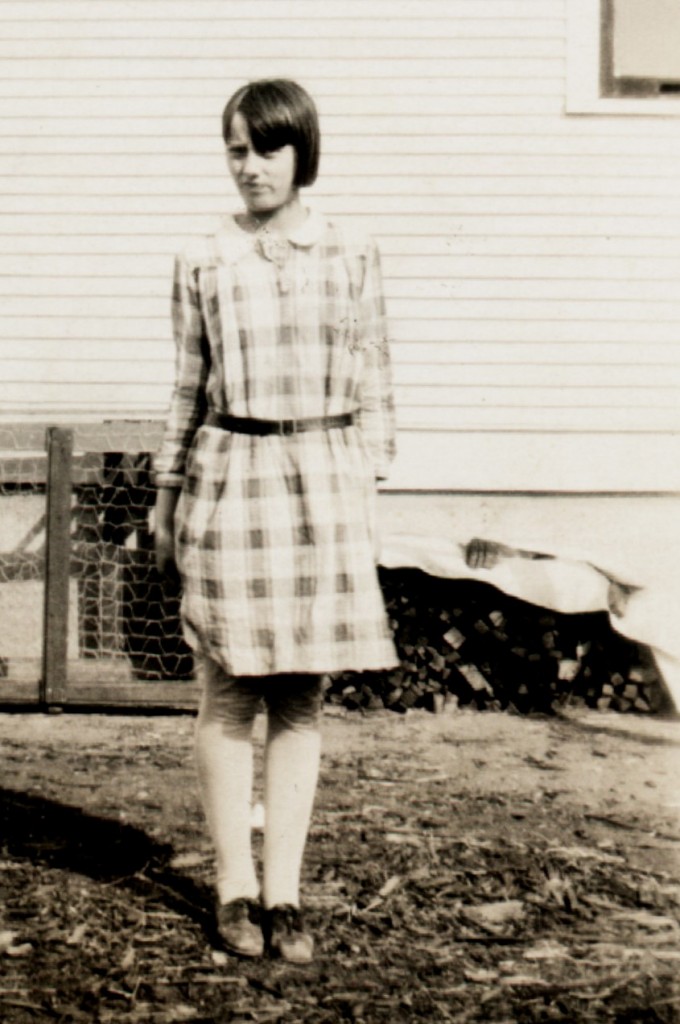 Velma was estranged from her parents as a teenager, as my mother also was, but unlike Mom, Velma never reconciled with them. She was seldom spoken of in the family, especially before Grandpa and Grandma Myers had passed. Even among her siblings, she was considered a “wild” woman, of loose morals. Looking back, it seems to me there were underlying emotional and mental health issues that were not recognized or acknowledged at the time. It was known to my sisters, but not to me, that Velma had married a “Mexican” (scandalous in itself), and had two children with him. The couple soon divorced, and the young children were adopted out. Velma married again, probably twice; it is as yet unknown whether there were other children.

By the 1950s, Velma had settled in Denver, under the surname of Washam. The city directory of 1953 lists her as single,  a maid at Beth Israel Hospital in that city, with a home address on the hospital campus. The photo below, from the 1950s, of Velma (r.) and an unknown friend, seems to suggest that Velma lived in some sort of sheltered or institutional environment. 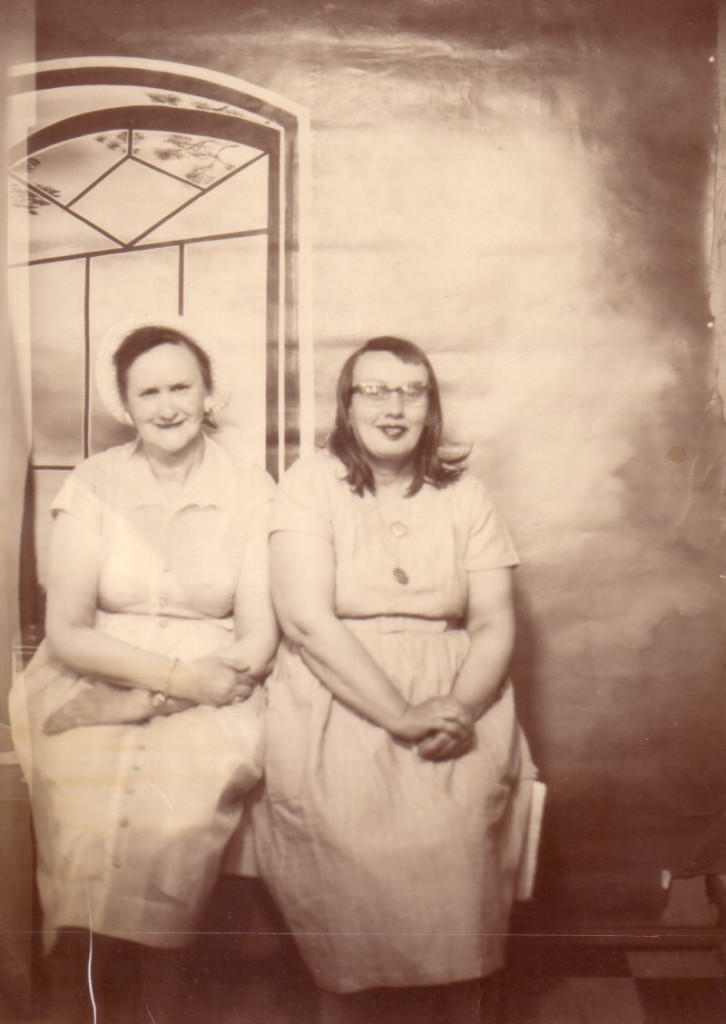 After Grandma and Grandpa died, Mother (Reatha) made contact with Velma, and visited her in Denver on two or more occasions. When Velma died in 1999, Mom claimed her cremains, and buried them in the plot she had purchased for herself earlier. When Mom herself died nine years later, I decided to have a stone made to match Mom’s which was already in place. Pardon the erroneous death date; I ordered the stone based on the cemetery’s records, which turned out to be incorrect. 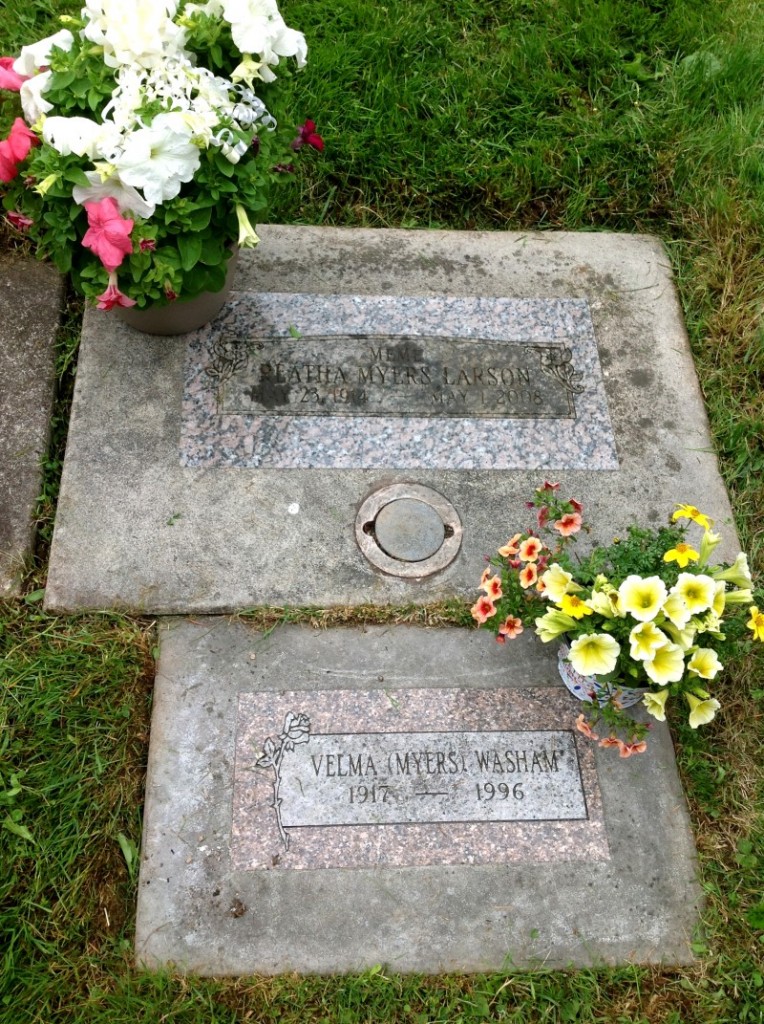 Missy (whose birth name was Charlotte) had no knowledge of her biological parents until the 1980s, when she made contact her father, Jose Arrietta. She never knew her biological mother, my Aunt Velma. Early this year, contact with the Myers family was finally made. It was not a discovery of mine. Cousin Lisa was investigating her biological heritage when she telephoned Uncle Barney, just because of his surname, Myers, and because he lived in central Montana, where Missy had grown up with her adoptive parents. Lisa had no idea whether they were actually related. That phone call led to their first meeting, in April of this year. The little boy is Lisa’s grandson; this photo spans five generations, although one (Lisa’s son) is missing. 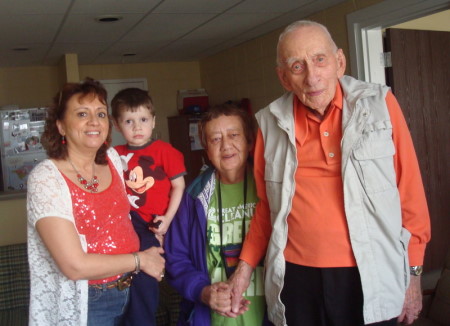 There are some more twists to this tale, which I will save for the next post. Stay tuned.