Out of Sweden, part 3

In the previous post, we displayed the baptism record of Olof Erickson, born in 1833 at Östre Glänne farm, Frykerud parish, Värmland, Sweden. In the same parish were found the baptisms of at least four siblings: Nils (1828), Magnus (1830), Johannes (1839), and Christina (1848, who drowned when a toddler). All were born at Östre Glänne, and two-year-old Christina died there in 1850 as well. Another important document is the marriage of Olof’s parents, Erik Magnusson and Stina Olsdotter.

A few comments are in order at this point. The Oluf Erickson essay (Norma Haakenstad version) tells of Eric “Jæger,” who was pursuing a military career until he married the daughter of a “gaardsmand” and inherited her parents’ property. The implication was that the parents were farm owners, but that does not seem to be the case. Nor have I found evidence that Eric was in the military, but it is a possibility; no Swedish military records for the period have yet come to light. The surname Jæger (Jäger in modern Swedish) needs more research. It may be the place Eric moved with his family when they fell on hard times. But the word translates as “hunter,” and as an occupation, may be used as a surname or nickname, regardless of geography. Lastly, it is a military term for elite commando troops, which may tie in with Eric’s alleged military background.

The Swedish churchbooks are more thorough than the Norwegian. In addition to baptism, marriage, and burial records (each in separate books), there are “household” books, which trace every individual from year to year, noting when they move from one household to another, as well as in or out of the parish. So while I have not tapped into any census records yet, I am able to follow movements of individuals (although it is rather time-consuming). For now, let’s look for birth information for Eric and Stina. The household records were helpful in this regard, as they always show the birth year for each individual, and sometimes the month and day as well.

Eric’s birth date in the household books is given as 16 Dec. 1805. Going to the Baptism books for Frykerud,

It seems that Eric was born at Östre Glänne, the same place he was married and where his children were born. As for Stina, her birth date is given in the household books as 23 Jan 1808.

24,25 [born, baptized, Feb. 1808 – close enough to be likely]; Åna [farm], parents Olof Nielsson and Ingeborg Bengtsdatter; [daughter] Stina. Witnesses include Stina Olsdotter Östre Glänne(!), the mother of Eric Magnusson (see above). This should be enough to prove that the baptizee is the same Stina Olsdatter who married Eric 19 years later.

Using a similar method on the more familiar Norwegian records, I was able to identify the parents and grandparents of Ingeborg Frantsdatter Hoelstuen. Here is a chart of the newly sourced information. Of course, the pedigree also applies to Oluf Erickson, John’s brother, and to all of their descendants. (John’s descendants are also related to the Larsons). Click on the chart to go to this pedigree & navigate all my data, with sources. 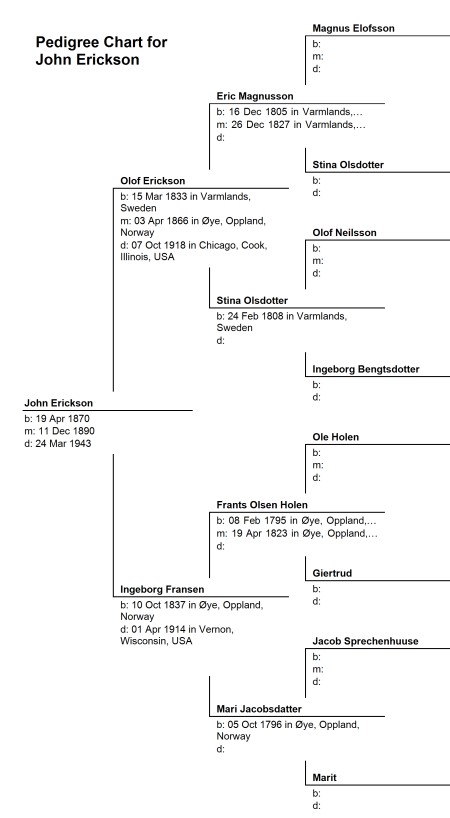 So we have identified two more generations of Erickson ancestors, going back well into the 1700s. There are three threads of inquiry that could be pursued later. One is to probe further into the past; the churchbooks go back at least another generation, although the info becomes sketchier. The second is Eric Magnusson’s early life, including possible military service, and third, the family’s move, if any, from Östre Glänne to an even humbler place on the river Klara. For now, we will say a fond farewell to the “Erickson-Larson connection.”

Out of Sweden, part 2
Stirrings