Here are a few more excerpts from Dora Swanson Erickson and the Third Generation, a memoir written by Esther Erickson Sizer (1913-1999) and her siblings, about the family of Oluf Erickson, and their relationship with the Larson brothers in McKenzie County, North Dakota. Click here for Esther’s entire 64-page booklet, and here for Oluf’s equally lengthy memoir of their earlier life in Brush Creek, Wisconsin, as neighbors of the Ole Larson family. These excerpts are not in the order they appear in the subject text, but more in the order of my thoughts.

The first passage reinforces my notion that the timing was inopportune for Oluf’s move to Squaw Gap. According to those who were there, crops were failing even earlier than I thought.

There are several comments on the short-lived Earl, ND post office.

The Skaar post office closed (in its turn) in 1955, according to a news article reproduced in the booklet. Another anecdote from the Earl post office years,

Another reproduced article states that long distance phone service came to the area only in 1970, which was quite a surprise to me. I remember hand-crank phones in that country from my childhood visits (1950s), but apparently there was no long distance capability(?). Imagine, in this age of global cellular reach.

Dora Erickson, Oluf’s wife, taught school at Squaw Gap. Among her students were her own children, and those of Axel Larson.

Sunday get-togethers with neighbors, especially the Larson brothers, are recalled with affection.

The reference to “talking the beloved Norwegian language” may seem surprising, given that all of the people named were born in the USA. But Norwegian was their “first” language, learned as infants, and spoken at home throughout their early lives.

The next passage puts the lie to one of my assertions in the previous post. 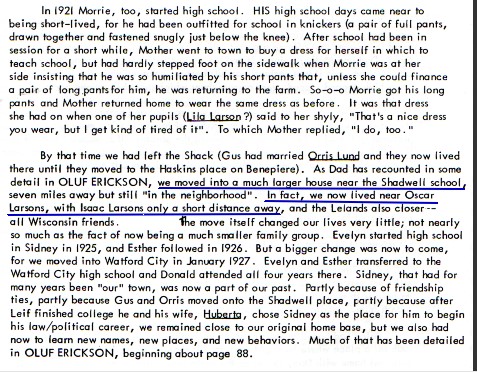 In the previous post, I said that Grandpa Isaac and the five boys lived for a time in the Erickson “shack.” But it was actually the “much larger” house near Shadwell school that Isaac rented in 1927, after Anna’s death, and after the Ericksons moved to Watford City. If you recall the story, Isaac and family had rented out their own farm, and sold their livestock and equipment, in preparation for their planned move to Washington state. But when Anna died, Isaac could not bear to leave the area, and they occupied the Erickson home until they could move back to their own.

The references above to “OLUF ERICKSON, page xx” do not refer to the magazine article already discussed, nor the alternate version distributed by Norma Haakenstad. There must be another essay by Oluf that I have not yet seen.

Next, a poignant reference to the hardships all of the homesteaders faced on the Dakota land:

Finally, yet another connection between the families. 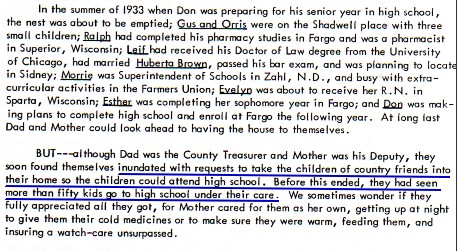 According to Uncle Ivan, one of those fifty lucky students was our own Uncle Vernon, who attended one year of high school in Watford City, before graduating in Sidney in 1936.

These two documents from the Erickson family chronicle a relationship with the Larsons that spanned at least seventy years, connecting three generations in two states. Thanks to my shirttail cousin Zach Sizer, I am privileged to post both documents here, in the hope that the memory may be retained a little longer. Next, looking for the elder Olof (aka Ole) Erickson (1833-1918) and his ancestors, poking for the first time into Swedish records.

The Erickson Connection, Part 3
Out of Sweden, part 1