First and foremost, a thousand thanks to cousin Joanne Lillevold, who originally researched this story, translated the source documents (drawing on her one year of college Norwegian, and struggling with several difficult, unstudied dialects), and presented it as a slide talk to her local genealogy society. While I am attempting to retell it in my own voice, Joanne did the heavy lifting. Many of the images were also collected by cousin Joanne.

If you are squeamish, you might find parts of the story disturbing or even revolting. In this age of extreme violence in literature and the media, circumstances of the crime itself may not seem shocking, but the punishment … OMG!

The motive behind Marte’s crime is a complete mystery. Cousin Joanne remarked cryptically that it was a case of “a rich person killing a poor person for the money.” The writers we will quote from are all confounded by the lack of any apparent reason. Apparently, motive was never mentioned at all in the rather perfunctory trial. Be aware that any speculation about motives or mental states that I may make in the course of the telling are exactly that: pure speculation.

Excerpts from the following, translated by Joanne Lillevold:

Here is a map of the farms I explored on my 2011 trip to Norway. Click on the image to enlarge. 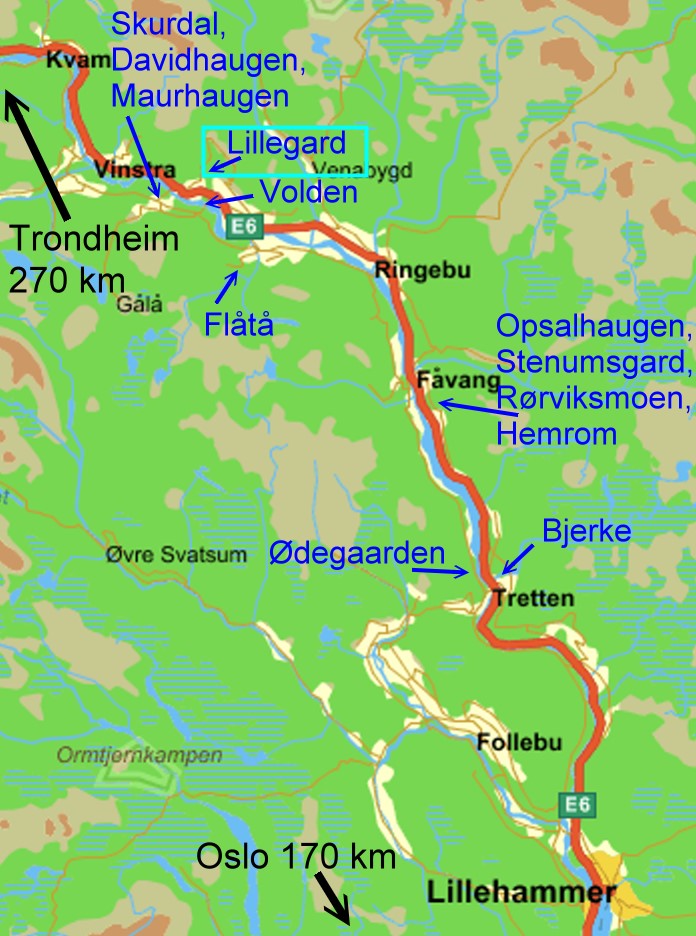 With the exception of Lillegard, all of these farms are associated with the last two generations born in Norway; that is, my first and second great-grandparents. I knew of some farms of more distant ancestors just outside this area, but time did not permit exploring them.

Enter cousin Joanne Lillevold. Her area of study did include those earlier farms, and overlapped slightly with my area. By removing a few of my labels, I was able to show her farms on the same map, in a different color. 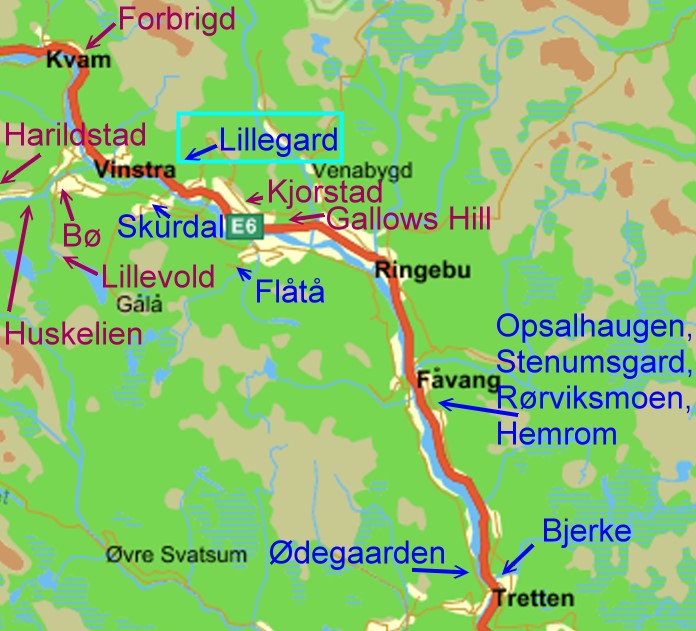 Lillegard is the farm of our nearest common ancestor, as noted earlier. Bø, Harildstad, and Forbrigd are homes of earlier ancestors to both Joanne and me. Lillevold is, of course, the namesake farm of our “new” cousin Joanne. The other places marked are important scenes in the story I am about to tell. Kjorstad, in addition to that distinction, is the current home of my friend, mentor, and guide, Pål Kjorstad.

One other farm of interest is not marked, but is located between Vinstra and Harildstad. Kongsli was the home of some important characters in the story, and also (possibly) some even earlier ancestors. The “big house” was one of the most spectacular farm homes I viewed on my visit. 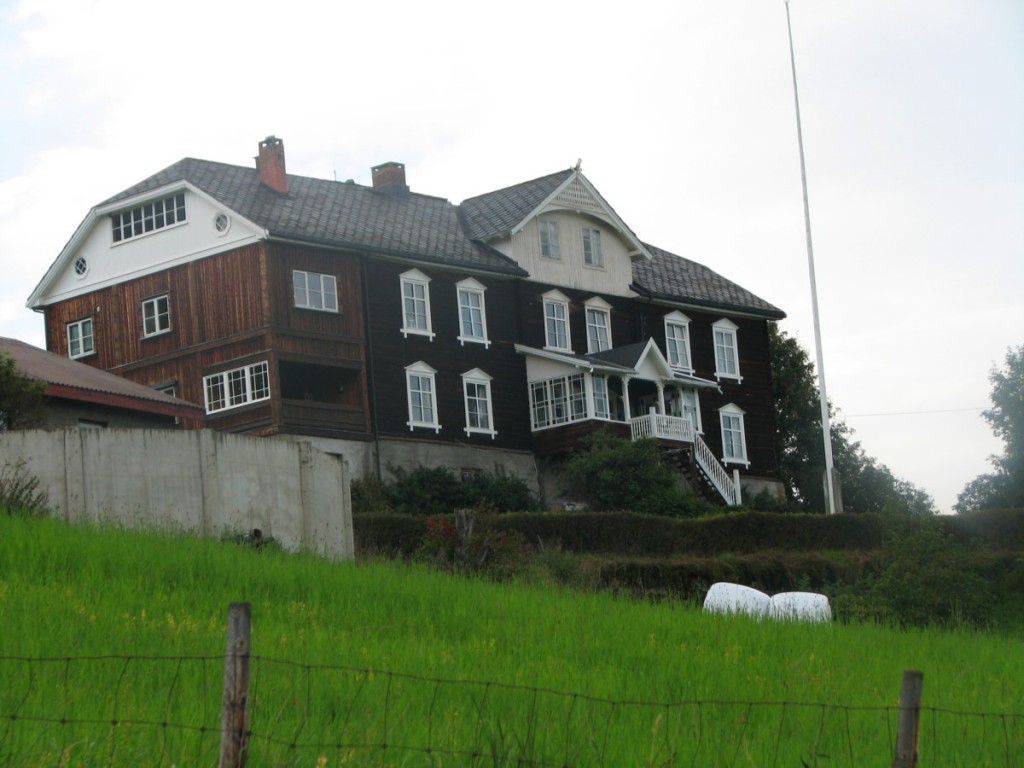 Finally, let’s zoom in on the map, to the area of our story, in satellite view. Click on this one to see a lot of the farm names. 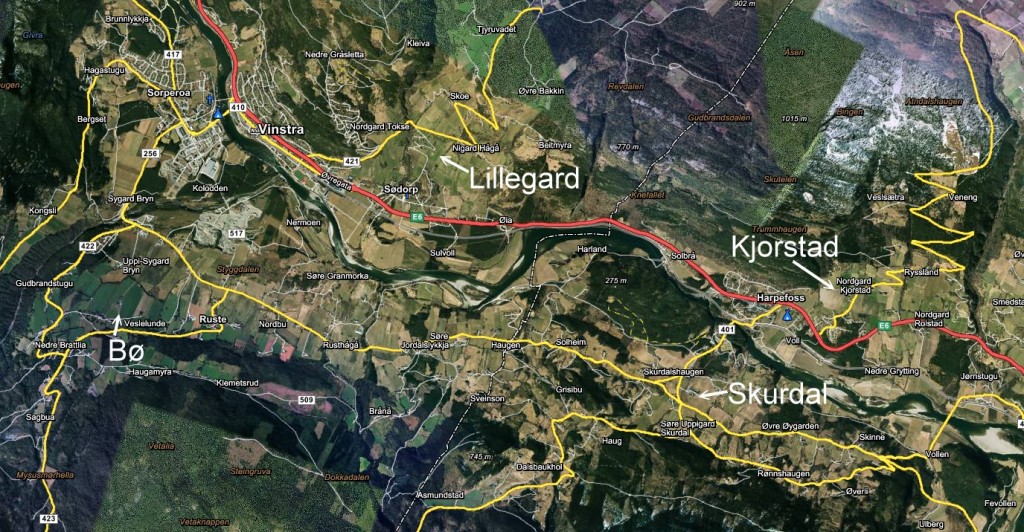 It is about 6 kilometers, or a couple hours’ walk, from Skurdal to Bø; that is, from the adult home of Lars Paulsen to that of the central character in our story. I refer to Marte Østensdatter, born at Forbrigd around 1650, matriarch of Bø when she met her downfall in 1694-95. The same Marte who happens to be Lars Paulsen’s great-great-grandmother, and thus my sixth great. Oh, grandma, what have you done?

Can You Forget Old Norway?
Lady of the Manor