Scene of the Crime

To read Marte’s story from the beginning, click here

A few miles up the Vinstra river from Bø lies a little farm called Huskelien (or Huskelia). It is much smaller and less prosperous than its downstream neighbor. The relative size of the farms can be seen below; the two satellite photos are shown at the same scale. As usual, you should click on them to see a lot of details. The present Bø farm is at least the size of the solid line. In ancient times, it was surely much larger, perhaps to the dotted line or further. Note the preponderance of gently sloping, readily cultivated land. 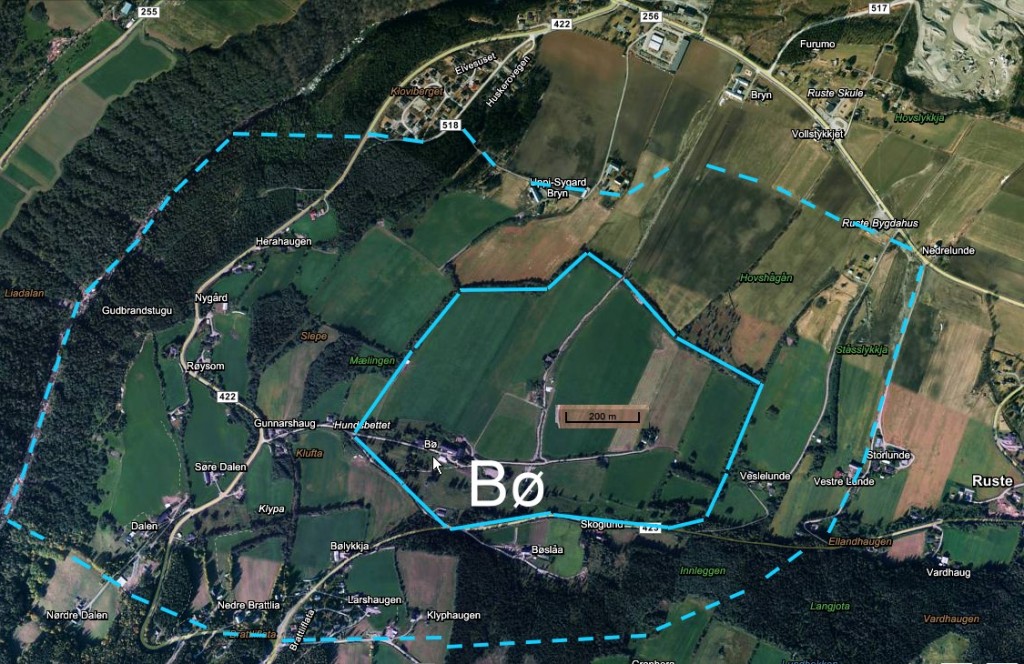 In contrast, Huskelien is nestled between steep, wooded hillsides, and the size of its clearing is miniscule. 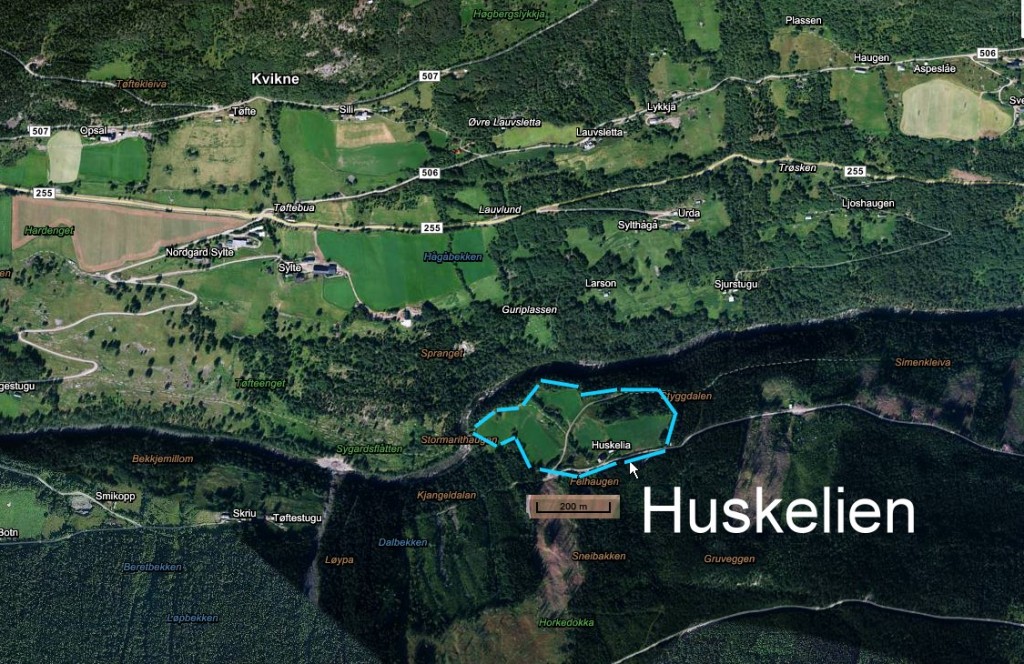 Furthermore, Huskelien lies on the “backside” of the river valley, on the slope facing north (away from the sun), making it colder and snowier, with poor farming potential. Even if the farm included a great deal of the surrounding forest land, it could hardly have been prosperous living. 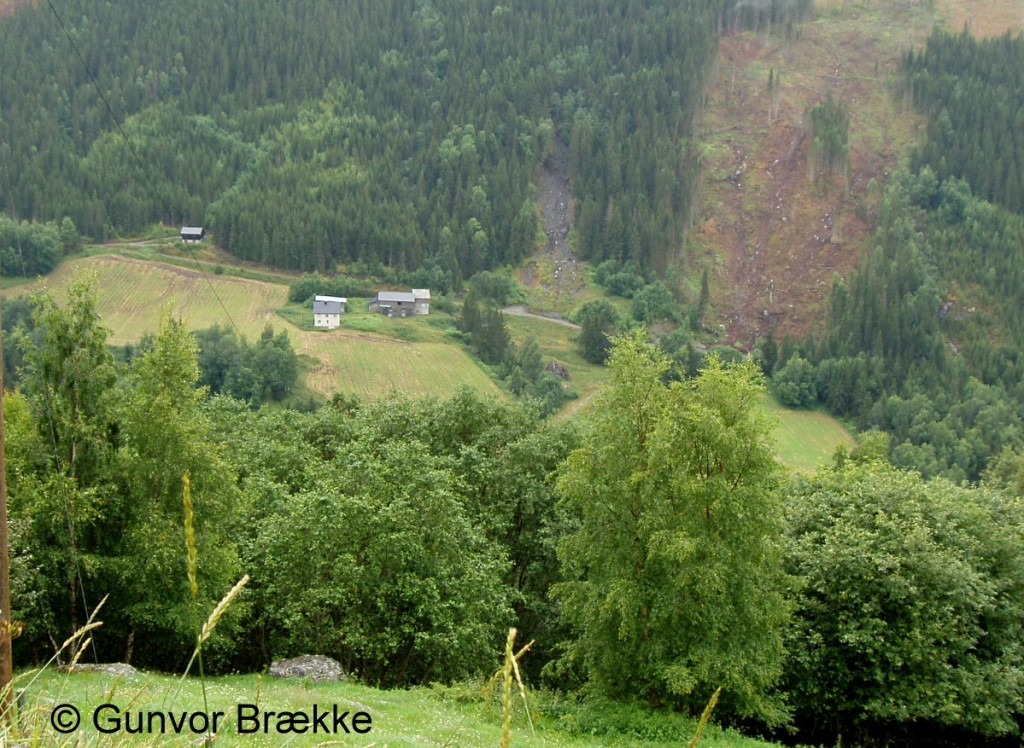 Huskelien, viewed from the northwest, near the Sylte farm, home of the blacksmith who witnessed the crime in progress.

The blacksmith was on his way to Huskelien, so his view was closer, from a similar angle.

Despite the apparent disparity in their economic status, the Bø and Huskelien families shared a close and cordial relationship. Kleiven suggested there was a family connection, but offered no details. In Marte’s time, Huskelien was owned and occupied by two sisters, single women of middle to advanced age, named Marit and Tore Jonsdatter. They were either widows or spinster women, living there alone. They had two brothers living elsewhere in the area, about whom more later. The inter-family relationship was such that Marit Jonsdatter Huskelien, the eventual victim, had held Marte Bø’s eldest son Torger, one of the eventual murderers, to sponsor his baptism. Remember that fact; it relates to a poignant scene coming up. If you are wondering why Marte did not hold her own baby, an ancient custom held that a mother was excluded from the church for a period after childbirth, so Marte herself was probably not present at the baptism. It was generally assumed that the Huskelien property would be inherited by the Bø family after the sisters died [? – unsure why the brothers would not inherit].

All this speaks loudly against the “greed” motive put forward by at least one author. To someone with Marte’s wealth, surely no amount of greed could account for this crime. Even if they had gotten away with it, the prize would have been pitifully small, weighed against the risk. But I am getting ahead of myself again. Or, maybe not?

At some date prior to the murder, the following incident occurred, as reported by Kleiven, pp. 351f:

One spring in the spring-work time, Tore [Jonsdatter] died suddenly and unexpectedly.  They found her in the field at Huskelien, where she lay on her stomach with a mouth full of earth.  Afterwards, Marit lived alone at Huskelien.

Ouch! No suspicion of foul play was noted, although the circumstances were more than suspicious. The precise date, even the year, of this event is not clear. Nor is there any known connection with her sister’s subsequent, violent death. But, — OMG again — how could there not be a connection, at least an indirect one? Henrik Ibsen could have made a great psychodrama out of this.

Cut to the chase: In the summer of 1694, Marit Jonsdatter Huskelien went missing. Her shoes were found on the riverbank, and it was feared she had drowned. That fear was seemingly confirmed when Marit’s body was found in the fall, lodged in a birch tree several miles downstream (ironically, close by the farm Bø).

Marit’s brothers, Per and Lars Jonsen, persuaded the sheriff of Fron to investigate her death. They were convinced that their sister had not drowned accidentally, nor committed suicide.

Lady of the Manor
The Confession