The old execution place in Fron was at Gallows Hill [Galjehaugen] at the Augla brook, and here all three were executed the same day.  When Marte went to the scaffold, she kicked off her shoes and asked an acquaintance to take them along to Bø.  “They can make a little money for these, also,” she said.  [These were Marte’s last words, at least in the record.] There was a steep slope from Gallows Hill down to the Augla, and for each chop the executioner rolled a head into the river.  Afterward, the heads were set on stakes on the hill.

I am torn between a sense of grief for this 300-year-old tragedy in my family, and a fascination with the story, those few aspects which are told by our sources (in fact or error), and those many things left untold. Also between revulsion at some of the gory details, and curiosity about their technical aspects.

For example, the rolling of the heads into the brook. Cousin Joanne collected this topographic map of Gallows Hill from www.finn.no. The pin marks the hill’s summit. 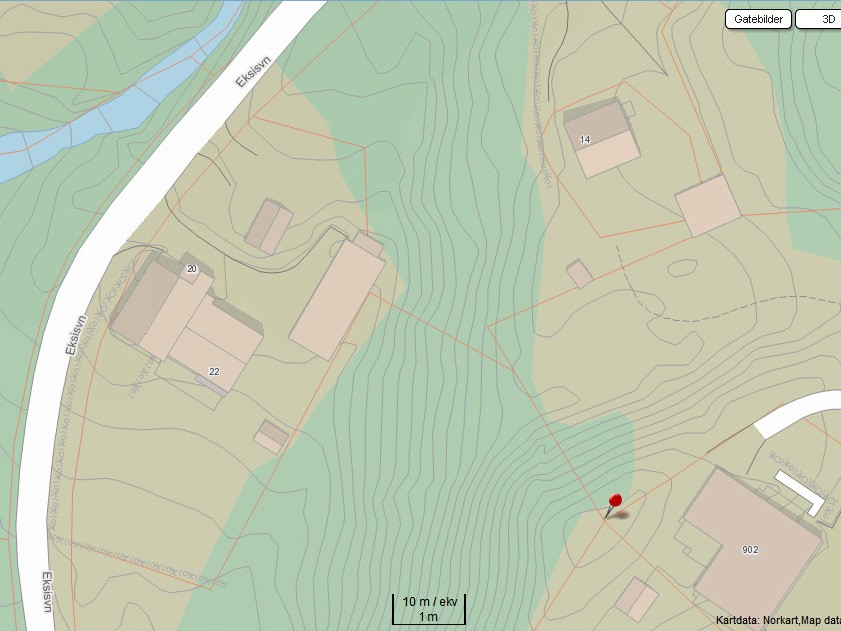 She then drew a line on the map, showing the shortest distance from the summit of the hill to the Augla, roughly 85 meters. 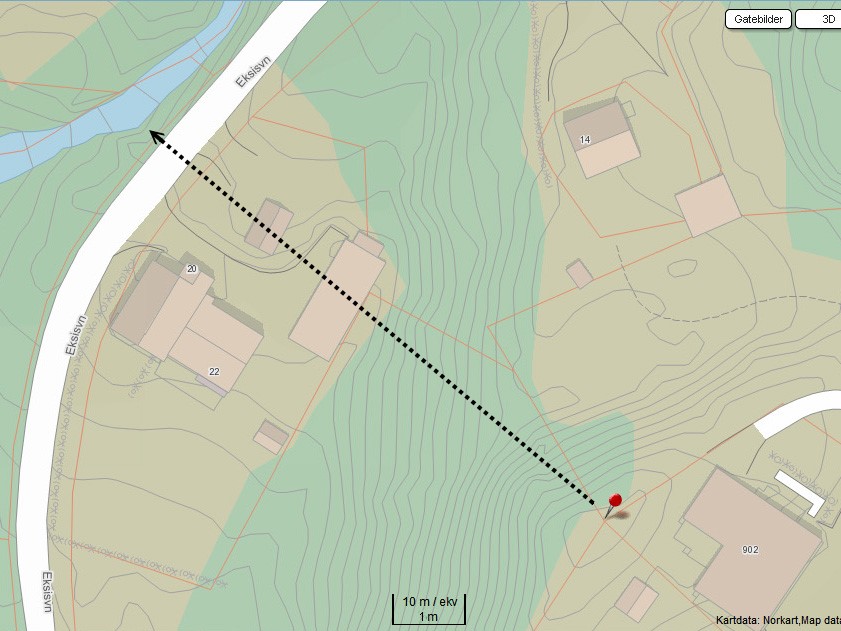 This would presumably be the approximate path by which the heads would roll from the scaffold to the water, if the scaffold were at the hill’s summit, which is not known in this case. But there is a serious problem here. Not the buildings, which were surely not there, nor the road, which may or may not have been, nor even the location of the scaffold. The trouble concerns the slopes involved.

A key feature of topographic maps is the system of contour lines that indicate slope. Where the lines are close together, the slope is steep; where far apart, it is more nearly level. On any given slope, a path running perpendicular to the contour lines is the steepest, i.e. the natural path of a freely rolling object.

Along Joanne’s line, the first 20 meters or so come pretty close to that ideal rolling path, almost perpendicular to the contour lines. But then, the contour changes, and Joanne’s line runs at a cross-angle. A little further on, about the location of the first modern building, the ground becomes nearly flat. Even a soccer ball would not roll across it without constant help. This fact led me to doubt the whole story of the rolling heads, until I re-read the passage from Kleiven. It says, ” There was a steep slope from Gallows Hill down to the Augla …”

But the steep slope ends more than 30 m. (100 ft.) from the stream, according to our map. A closer inspection, however, reveals a low-lying channel at the base of the slope, indicated by v-shaped protrusions in the contour lines, which suggest it may have been the stream bed at some era in the past. 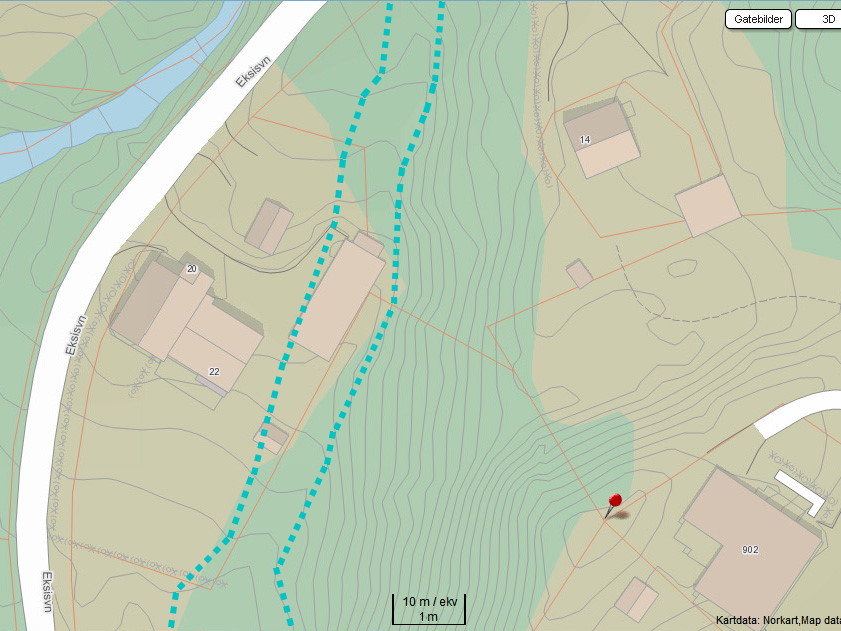 If this were the case, it would certainly be possible, with some planning and preparation, for the executioner to roll the heads into the brook, whether the scaffold was at the summit of the hill, or on the shelf to the north. The poetic justice here is stark and gruesome:  the murderers threw their victim into a river; so, the executioner caused their severed heads to roll into a brook. 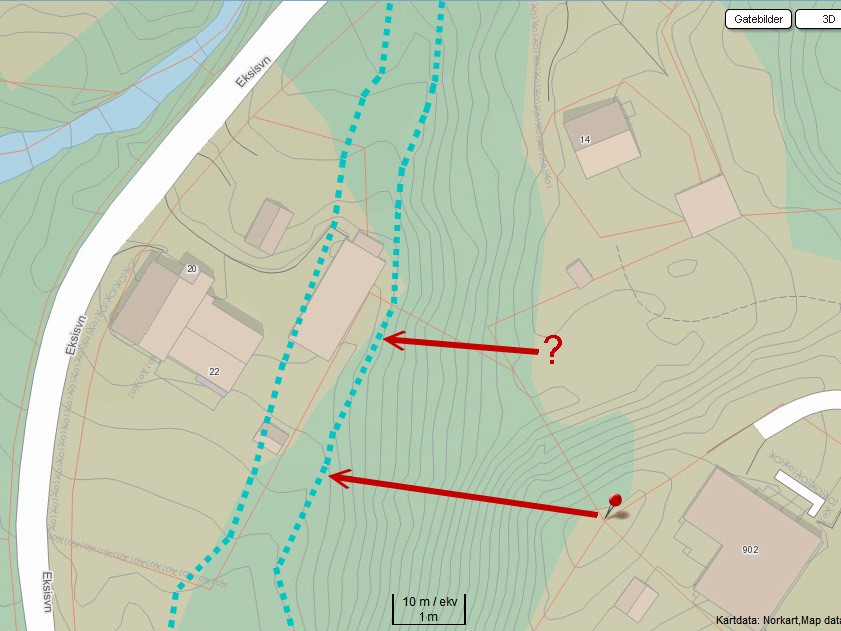 Under this scenario, the large flat area, instead of an obstacle to the rolling, would have provided a convenient gathering place for a large crowd of spectators to watch from across the creek.

Which brings back the question, who was present at the execution? It may be that attendance was purely voluntary. Literature, both historical and fictional, makes clear that public executions were wildly popular in urban England during the 18th century, drawing crowds in the tens of thousands. It is unknown whether this morbid fascination extended to rural Norway. On the other hand, we have already raised the possibility that prevailing customs may have required families of the condemned, even including small children, to witness the event. I have yet to find any such details in English non-fictional sources; so far, it is only a possibility in my mind.

As for the method of execution, it was just one of several macabre options offered by executioners of the time. Next: a look at the menu.