We interrupt our narration for a moment, to make a comment that belongs in the introduction, and will move there when the series is collated: Unlike the Medieval royals and nobles I claim as ancestors in my lighthearted pages on ancient history, Marte Bø is a documented sixth great-grandmother. Joanne Lillevold and I have assembled evidence from primary and secondary sources, establishing our mutual relationship, in accordance with the Genealogical Proof Standard.

In Thomle’s article, he itemized the costs of the triple execution, and maintenance and transport of the prisoners during their twelve weeks in custody.

According to what was stated in the Gudbrandsdalen bailiff’s records for 1695, all three offenders were taken into custody 14 November 1694 and held in jail at the [farm of the] sheriff in Fron, Paul Paulsen Kjørstad, until on 11 February 1695 they were all beheaded by the executioner from Oslo, Nicolai P. Flug.  By the sheriff’s receipt, it is seen that all the prisoners were transported from Fron to the district court in Hedemarken, over 12 Norwegian miles [120 kilometers] and back again and that he for this transport and for the prisoners’ maintenance for 12 weeks and five days and guarding, according to agreement, was paid 19 riksdaler, 9 shillings.  The executioner was paid for the beheading “by sword” and for setting the heads on stakes, as well as for the travel, horse rental for himself and “journeyman,” along with maintenance from Stange to Fron, 15 Norwegian miles [150 kilometers] forth and back, in all 63 riksdaler.

The executioner was probably paid an annual salary by the city of Oslo, in addition to the per-item fees paid (by Fron parish?) for this particular “service,” and for travel expenses. Joanne did not find much information on the Oslo executioner, but did collect a photo of the house where he may have lived; at least, it was the home of the city’s executioner in the 1700s. It is located on Rådhusgata, not far from Oslo’s city hall, and currently houses the Young Artists Association. 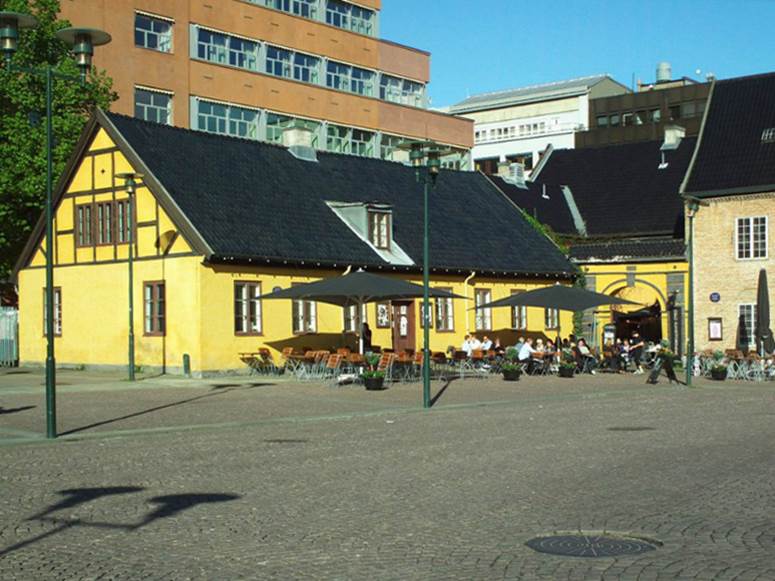 Joanne found more extensive info about the executioner of Bergen during the same time period, Augustus Høcker. In addition to a brief biography, there was a fee list for the various duties he could perform. It seems likely that the Oslo executioner offered similar services, at comparable rates. The fee for rolling a head into a brook(!) is not listed here. 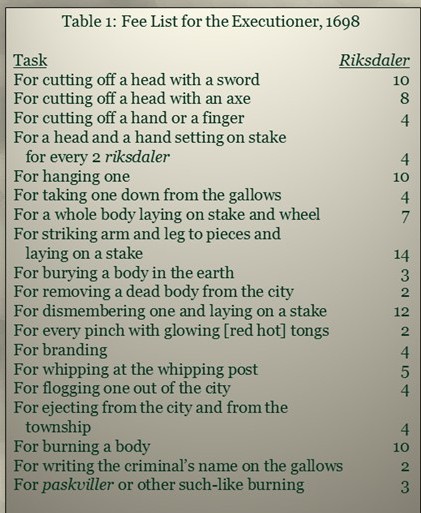 What a way to make a living! Joanne translates two different words as “stake” (two kinds of stake), but the point is clear: these were brutal times. One does not have to search long to find other methods of torture and execution even more revolting than those listed.

I was surprised to learn that beheading by sword was considered the most honorable or dignified form of execution, in Scandinavia and throughout the Western world. It was generally reserved for upper-class criminals. Wikipedia has an extensive article on decapitation. The execution of choice for lower classes in Norway was beheading by ax, and in England and elsewhere, hanging. By “choice,” of course, I mean the choice of the authorities, not the condemned. Presumably, the rolling of the heads, and displaying them on poles, was not considered “honorable” by anyone.

Next: Who got the farm?

Heads Will Roll
The Spoils