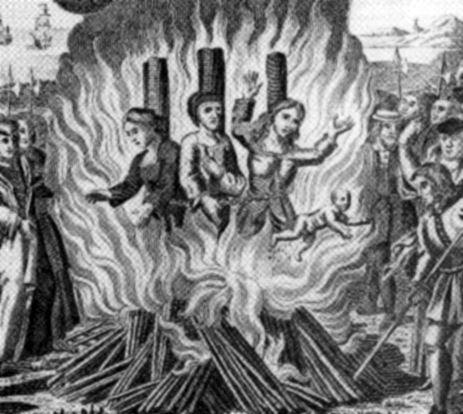 Why bring this up? None of our three twentieth-century sources even hint that seventeenth-century witch hysteria had any bearing on the deaths at Huskelien, much less those at Gallows Hill. There was apparently no mention of it in any of the documents, nor even in the folklore collected by our source authors. Or perhaps the authors, with their own modern biases, considered folklore on this topic unworthy of recording.

In Europe as a whole (and in European colonies, where it touched an ancestor of mine), the witch-trial era peaked in the 1600s, then declined rather swiftly around 1700. The last trials and executions were about 1750. It was also in that year that the trials were outlawed in Great Britain. I have not found similar information on laws in Denmark-Norway, but the last known witch trial in Norway took place in 1750 as well. It is estimated that at least 60,000 accused witches were executed in Europe between 1300-1750; some estimates go much higher. In just one sparsely populated county of Norway, Finnmark, 135 trials and 91 executions took place, according to the research of scholar Liv Helene Willumsen.

In our local area of interest, Fron parish, there were many witch trials, including three burnings in 1619-1620.  Joanne is still working to find whether those executions also took place at Gallows Hill. The legal status of witch prosecution in Gudbrandsdalen by 1694 is not known. But even if it was banned from the legal-ecclesiastical system, one can hardly doubt that the superstition was still widespread among rural farm people. And what sort of tragic drama would better fuel such mass hysteria that the story we have related?

To begin with, look back to the sudden death of Tore Huskelien, prior to the murder of her sister. It is said that she was found in a field, “lying on her stomach, with her mouth full of earth.”  To the modern reader, this suggests one of two things: either someone forced her face into the dirt, suffocating her as she struggled, or she suffered an epileptic seizure.

While foul play can by no means be ruled out, even though it is not mentioned in the sources, let us consider the alternative. In ancient times, epilepsy was believed to result from possession of the body by evil spirits. That superstition would certainly play well in combination with the belief in “black magic,” that is, that a sorcerer could cause another person to be so possessed.

Suppose, then, that Tore had a history of seizures. That would be likely to arouse suspicion among the superstitious that her “possession by demons” was intentionally caused  through witchcraft. It is even possible that both Marte Bø and Marit Huskelien, although long-time friends, eventually came to suspect each other. And when Tore turned up dead, well, you can take it from there.

This could also help explain how Marte was able to persuade her son and hired man to commit the murder; perhaps they were also fearfully superstitious. Mind you, the witch-fear angle and the mental illness theory are not mutually exclusive. Both disorders could have been in play, each reinforcing the other.

I have some great fiction spinning in my head around this story. It remains to be seen whether I can get any of it on “paper.”  But for now, I will bring the series to a close, summarizing with several of Joanne’s PowerPoint slides. As always, click to enlarge. 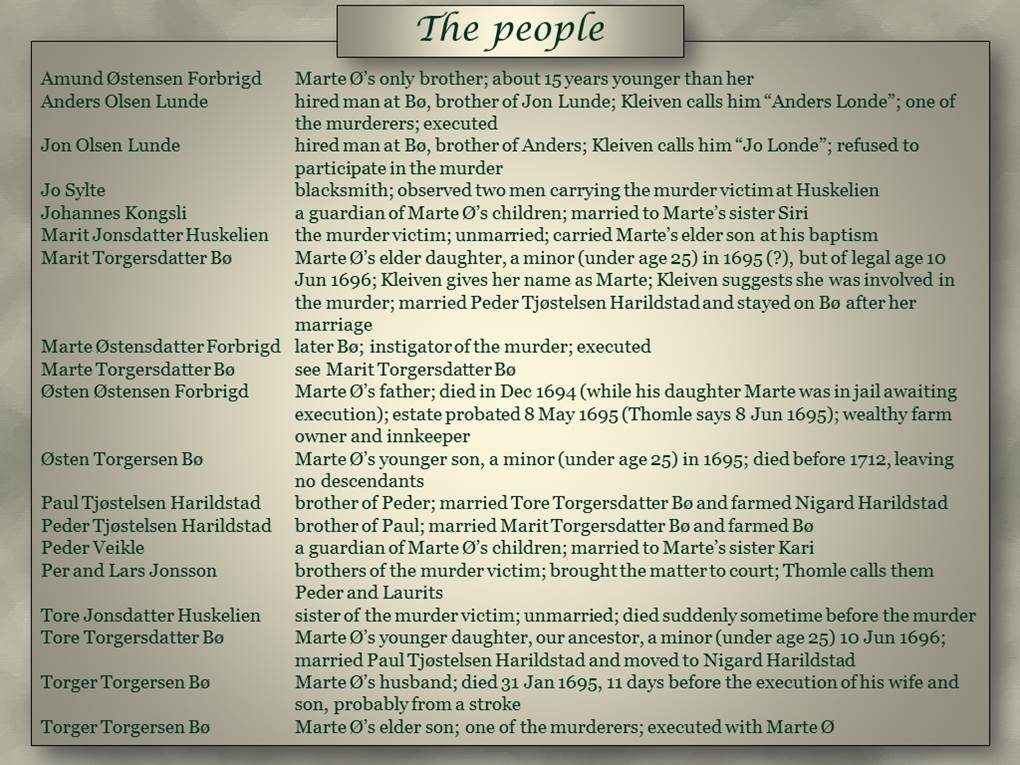 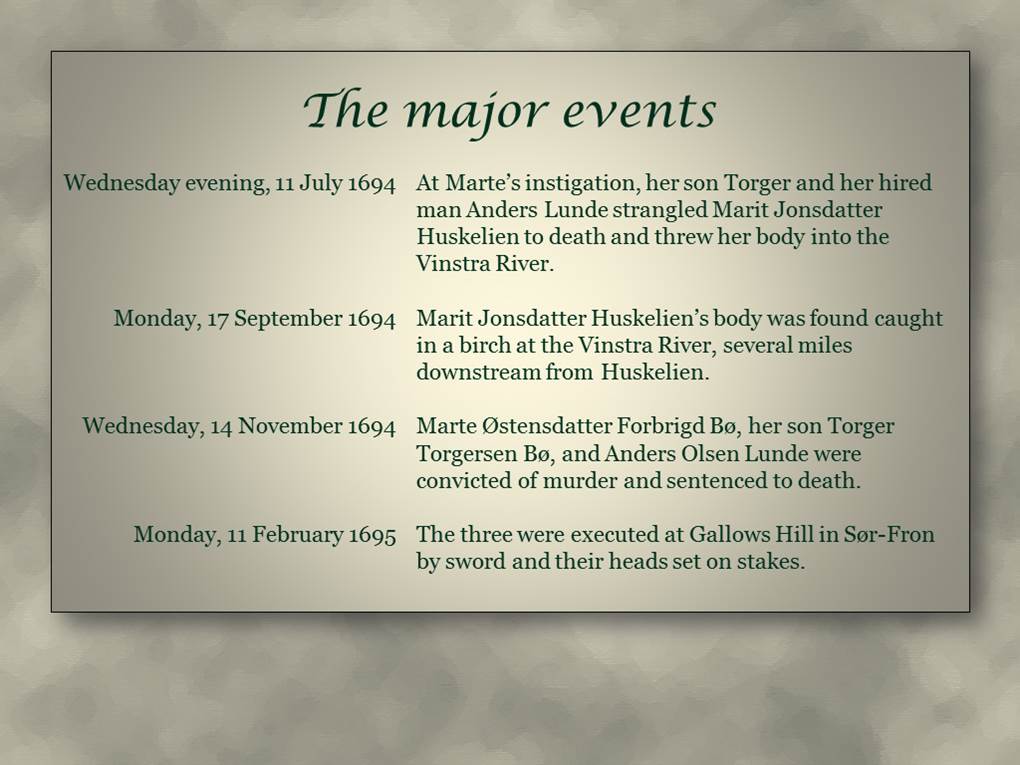 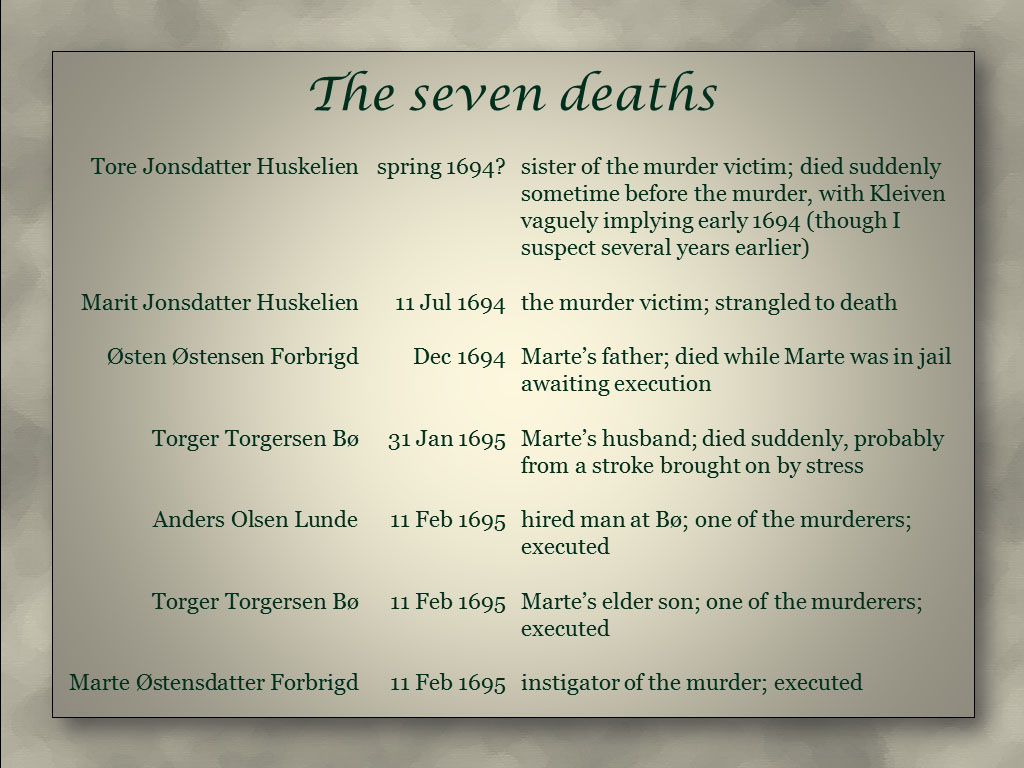 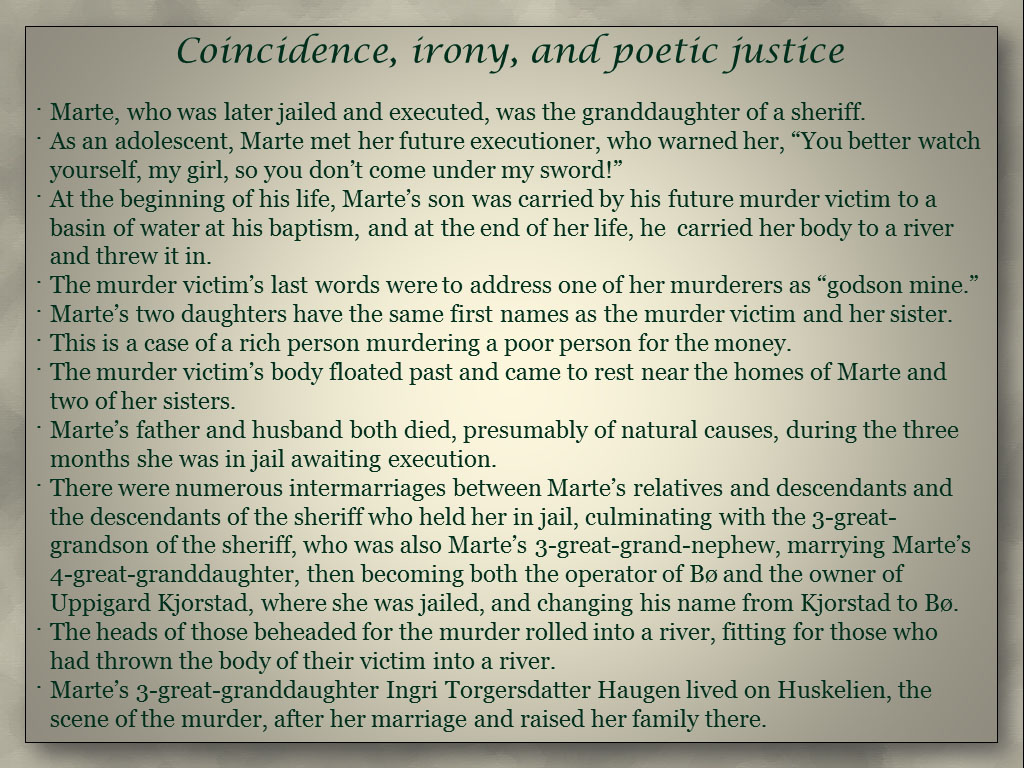 Once more, a shout-out to cousin Joanne Lillevold, for providing me with nearly all the “raw materials,” lots of ideas, and generous proofreading and editing help.

Next: a summary of my 2014 “mini-genea-journey” through Iowa, South Dakota, and Nebraska.