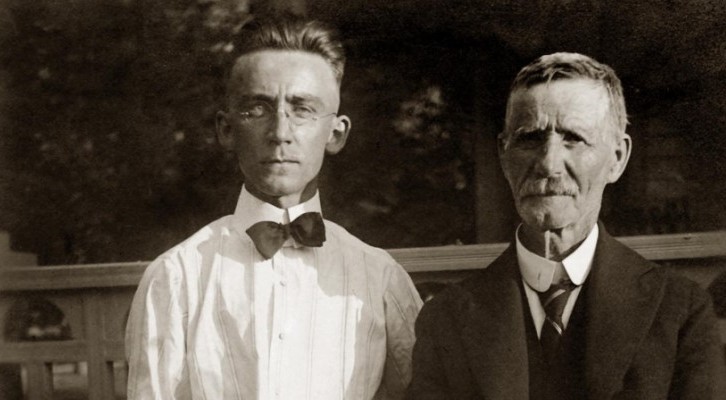 Top photo: Anton Hogstad Junior and Senior – Below, Anton Jr. and Ebba Nesseth. They were married in 1920; it is unknown whether the two snapshots were taken on that occasion. 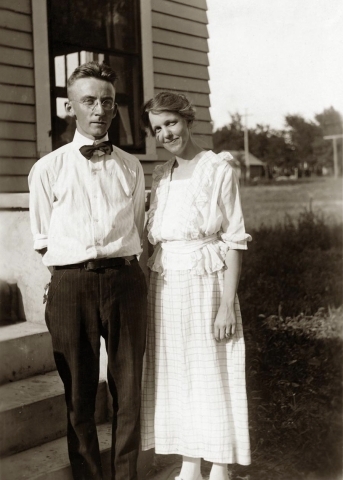 In early 2016, I met with Tom Hogstad (not pictured), a third cousin who happens to live in my town. His grandmother, Ebba Nesseth (1888-1952), is our biological connection; Ebba is my second cousin, once removed. Click on Ebba’s name to explore her line back to our common  ancestors, Lars Paulsen and Anne Larsdatter Skurdal.

The family’s church and census records are found in the Norway Digital Archives. Like so many future immigrants, Anton entered this world in deep poverty. 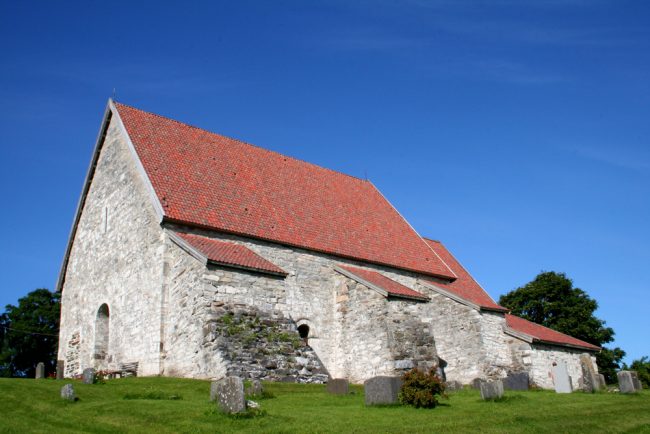 The child was named Anthon Jørginius, his parents were “Ungkarl” (single man) Anders … Bruraak (ellipse original) of Strinden (parish), and “Pige” (single woman) Cecilie Arentsdatter of the place Hogstadspl(ads). The child’s last name or “patronym” is not noted. This is usual, as it is obvious from the father’s name that the child will be known throughout his life as “Anton Andersen.” This custom was beginning to change, however. The father’s patronym is also missing, which is unusual (but customs were changing), and made tracing the father more difficult (see below).

Strike one: The parents are unmarried. While so-called illegitimate children are not uncommon in these records, they were surely at a huge social and economic disadvantage. Even worse, the father’s patronym (Larsen, Johnsen, or something-sen) is not given, only the farm name of Bruråk, in the nearby parish of Strinda. [That is not enough information to clearly identify the man from other documents, nor even to reliably find him at a later date. It indicated only where he lived, or was thought to have lived, at the current time. At least, that was the old custom. While some couples are married after the birth of one or more children to them, I found no evidence in this case that the father ever lived with or even met his son.

Strike two: in the place-name “Hogstadsplads,” the suffix “plads” suggests a tenant plot or husmannsplads, the poorest echelon of rural family life.  This is verified in the census of 1865 (two years before Anton’s birth), where his mother’s parents were indeed husmenn, something akin to “peasants.” While linguistically and politically imperfect, that translation does not overstate their poverty. The census of 1875 finds Anton Jørginius Andersen, now eight years old, living with his maternal grandparents. His mother is absent.

To put his emigration into perspective: over a quarter of Norway’s population embarked for the “promised land” of America between 1865 and 1895. As with other migrations, those who left were predominantly those with the least to lose. They traveled using funds sent from abroad, and even Norwegian government assistance in some cases, in an effort to relieve the country’s crushing overpopulation and terrifying, recurring famines.

Anton made the journey in 1880 or 1881, according to US census records. Information on his immigration, and that of his mother at a separate time, is sketchy (see below), but the emerging picture is vivid: a 14-year-old boy, dirt-poor, probably illiterate and speaking no English, arriving alone and virtually penniless in a foreign country. But like so many others, this young immigrant achieved a life of more success and prosperity than he could ever have imagined in his homeland.

Unlike my Norwegian ancestors, Anton Hogstad (the surname he chose for himself in his new country), did not take up farming. Instead, he became a master mechanic and millwright, working in industrial areas of Wisconsin and Pennsylvania. His son, Anton Jr, earned a PhD and was a widely published professor of pharmacy.

Here is an article from an Oshkosh, Wisconsin newspaper. In 1904 Anton Hogstad, Senior, was not only a master mechanic and millwright, he was a political activist in the Social Democrat party. Besides being elected secretary of the local central committee, Anton’s name was offered as a potential candidate for mayor, so he must have been held in high regard. 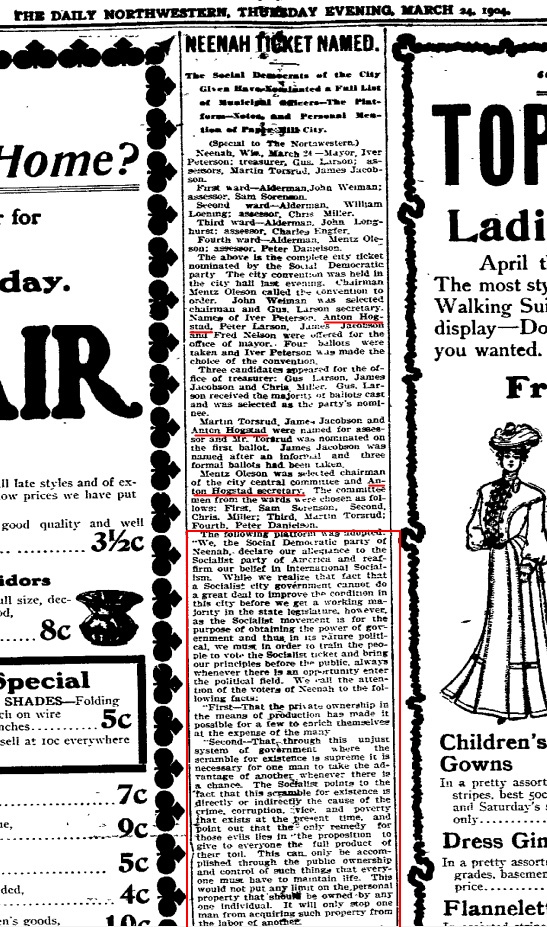 The name “Social Democratic Party of Neenah” reflects a party label that had been abandoned at the national level. In 1901, the national Social Democrat party merged with a faction split from the “Socialist Labor Party,” and became the “Socialist Party of America.”. Apparently, some local chapters were still using the former party name. The party’s five-time presidential candidate, Eugene Debs, received over 400,000 votes in 1904, when Anton Hogstad was helping to further his campaign in eastern Wisconsin. Debs went on to tally more than 900,000 votes in 1912 and again in 1920. 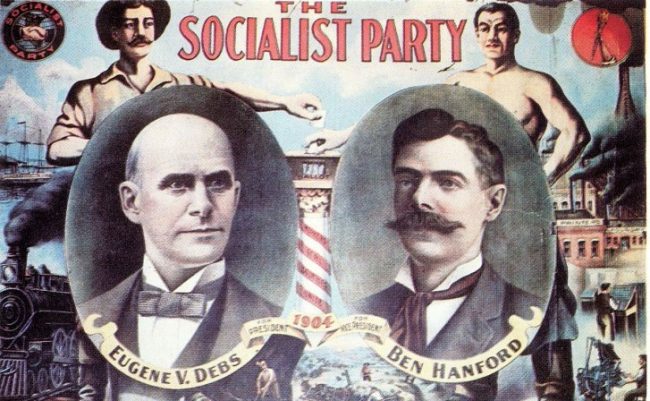 It is challenging to reconcile Anton’s political activism at this early date, with the fact that his naturalization as a US citizen was not completed until 1933 (over 50 years after his immigration). Despite that long delay, it appears that he had become an engaged (future) citizen much earlier. Another remarkable accomplishment, given his very humble beginnings. 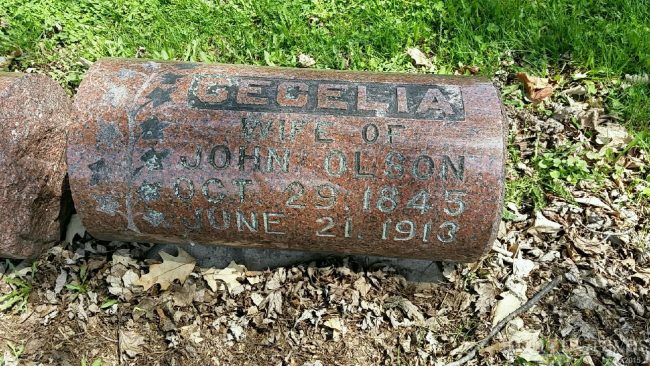 The late Dick Hogstad located the graves of Anton’s mother and stepfather, John and Cecilia Olson, in Neenah, Wisconsin. At first, I was skeptical about the relationship, but some further research assuaged my doubts. When I finally found Cecilia in the 1875 Norway census, she was indeed married to Johannes Olsen of Verdal parish. I also found their marriage record (1872) in the churchbooks.

As often happens, this raised a whole new barrage of questions. I had already found that Anton was living with his grandparents in 1875, and his mother was absent from the household. Cecelia and Johann were living in a place named “Værkarbid” which Google translates as “works work(!)” There were no children with that couple, but the other family in the home had several. So, why was Anton not with his mother and her husband?

Based on current research, Cecilia, Johann, and Anton apparently traveled to America separately, in 1881 and 1882. This may be disproved later.

Johann and Cecilia appear on the list of persons leaving Inderøy parish, with a “attested” date of 30 March 1881. It is not clear whether that was the date they announced their intentions, their planned date of departure, or the actual departure from the parish.

I found no such record, as yet, for Cecilia’s son Anton.

The Trondheim police emigration protocols are frustratingly sketchy; not nearly as detailed as those in Oslo. There is a Cecilia Arntsdtr. age 35 of Inderøy parish, emigrating in August 1881. She sailed for England, with John not on the same list, nor any other record located so far. Both Cecilia and Arnt (alt. Arent) are quite uncommon names; it is unlikely there would be another Cecilia Arntsdatter of the same age, from the same parish. However, she is listed as pige (unmarried), apparently falsely.

Anton I Andreassen of Inderøy parish, age 15, emigrated in 1882, also via Hull, England. Again a fairly uncommon name, and “I” vs. “J” as in Jorginius were interchangeable in some old scripts. This also seems a 80-90% chance to be our man.

A brother of John’s, Anders Olsen, immigrated about the same time, according to US census records. As for Johan Olsen himself, the name is so common, I expected to find more than one candidate in the emigration rolls, but instead found none, so his migration is still a mystery, after registering his departure (or planned departure?) from Inderøy in March 1881, along with Cecilia.

It is established in family lore and in documentary evidence that the father of Anton Hogstad (not married to his mother) was named Anders Brurok of Strinda parish. The form of his name, as found in Anton’s baptism record, at first seemed problematic, but enough evidence has emerged to nail him down with some confidence. 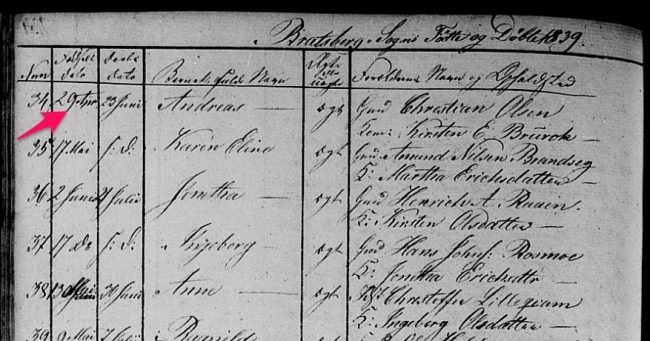 I was unable to find Anders in the 1865 Norway census. There is some evidence he may have been in the far north of Norway at that time; perhaps he was in such a remote area that he was missed at census time, or the record was lost.

Now, a bit more scandal creeps in. In 1874 and 1881, two children were baptized in Trondheim cathedral to Anders Christiansen Brurok and his wife Juliana. Moreover, the census of 1875 lists Anders and Juliane with four children. The customs regarding surnames were now changing; instead of his patronym, Christiensen, Anders is using the farm name where he was born.

The three eldest children have not been successfully traced (they could possibly be Anders’ stepchildren). Their “place of birth” is given as Hammerfest, a small island parish in Norway’s far north. However, no records of them was found in that parish’s books. As for Anders, it is clear that all the records named above refer to the same person. With no contradicting evidence, it seems safe to assume that the baptism record of Anton Hogstad also refers to the same Anders Brurok, and that he may have been married to someone else at the time of Anton’s conception and birth.