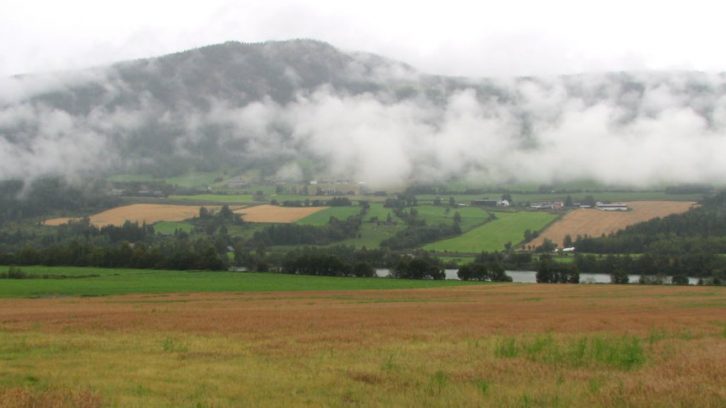 My second great-grandfather Amund Amundsen was born at Volden (then called Dalseggvolden), in Sør-Fron parish, Norway, 11 Sept. 1829. Click here to view his profile in the family tree. In the top photo, the near foreground is part of the present-day Volden farm, extending to the river. Although the landscape has been changed by historic floods, it is the same location. The old structure pictured below was being reconstructed in 2011.

Amund’s birth was perhaps the humblest of all my ancestors in his generation. He was the “illegitimate” son of a husmann’s daughter, as recorded at his baptism on 4 October 1829. Despite these humble beginnings, after Amund immigrated in 1857, he was an early settler in the ethnic community at Coon Prairie, which became a popular destination for Gudbrandsdalers. His picture appears in the commemorative history of the settlement and church, first published in 1927. Pardon the poor reproduction.

Amund Married Anne Madsdatter Maurhaugen in Sør-Fron on 3 November 1854. Their first child was born in Norway, with nine more to follow after their immigration Click here to view the family group.

The couple are buried, along with one of their children, at Coon Prairie church.