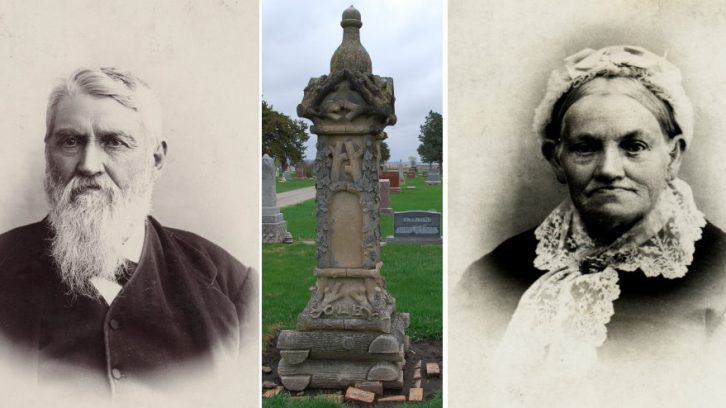 My second great-grandfather Harry Eugene Colby was born on 15 December 1822, in Darien Township, Genesee County, New York. Click here to view him in the family tree. His ancestors had lived in the Northeast since his fourth great-grandfather (my 8th great), Anthony Colby, arrived in the nascent Massachusetts Colony, only ten years behind the Mayflower.

Harry’s father, Danial Colby, moved to western New York state in 1812. Upon his maturity, Harry moved further west. He worked as a store clerk in Kane County, Illinois, before marrying Susan M Eldridge there on Jan. 1, 1849. Susan was born in New York state on 19 May 1820 (according to her obituary). Nothing more is known about her early life or family.

In 1856 Harry and Susan moved to Monona County, Iowa, where Harry worked by spells at farming, and at businesses in the town of Onawa. They had three children: Helen A. Colby, who married Stephen Myers, and is pictured in their profile, Frank E. Colby, and Harry E. Colby, Jr. Below, Harry with his two adult sons, and their two sons, around 1900. Clockwise from left: Dean, Frank, Harry, Jr., and Paul.

True to period, the exclusive portrait is of only the direct male heirs; Harry and Susan had a total of sixteen grandchildren. Click to view three generations of descendants.

In 1888 (at 66 years of age), he joined with his son Frank in a coal and lumber dealership, which thrived for many years thereafter. Harry and Susan are interred in Onawa City Cemetery, with many family members buried nearby. Below, details of their monument, shown in top photo.