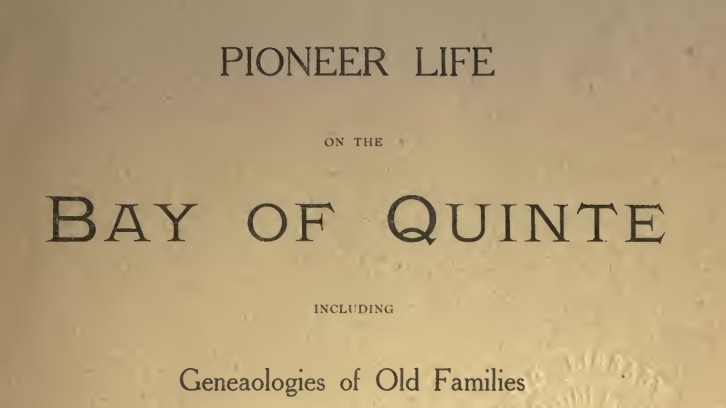 The British Are Coming!

My fourth great-grandfather Gabriel Sprung was in turn the great-grandfather of my great-grandmother Hanna “Hattie” Sprung Drayer. If you are keeping score – among my near relatives, these are ancestors of Dan/Lillian Myers’ descendants only. Click here to view Gabriel’s profile in the family tree.

Gabriel Sprung was featured in this book from the early 1900s. Distant cousin Fran Card of Galveston, Texas (Originally from Toronto, Canada), related through the Sprung family, first alerted me to the source. In the absence of any known documents, this excerpt is the only known evidence on the early history of this ancestor. It is only an anecdote, to be sure, but tells a remarkable story: 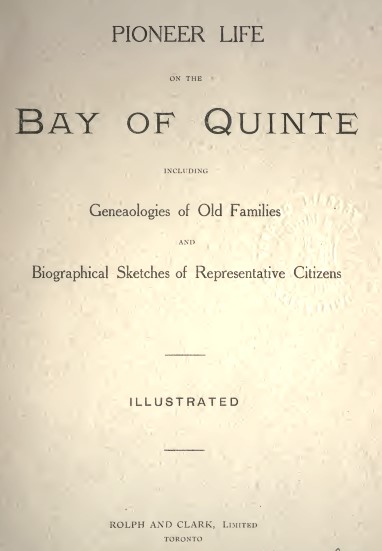 Here is the lone passage depicting our ancestor:. 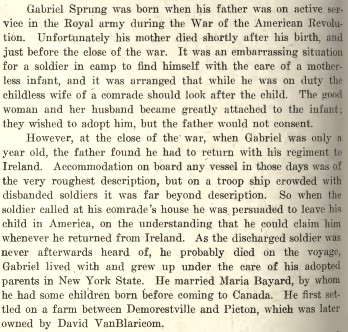 While there is a lot of ambiguity, and a few doubtful statements here, the key point is quite plausible: Gabriel Sprung’s father, name unknown, was a British soldier stationed in the American colonies at the approximate time of the Revolutionary War. This means that two of my distant great-grandfathers were fighting on opposite sides.

One big problem with this source is, it gives no dates for any of the genealogy and events it describes. Its implication that Gabriel Sprung was an infant about one year old at the end of the Revolution (1783) is quite problematic. Most movement of loyalist refugees to Canada and elsewhere took place very soon after the war’s end; the flow had almost stopped by 1800. If Gabriel Sprung was already married, with “some children” by the time he settled in Canada, he must have been born well before 1780. There are several genealogies online that give Gabriel’s birth date as 1767. None of them includes source citations, so they cannot be considered reliable. However, his grandson Richard was verifiably born in 1826, and was the second son of the second son. I hope that further research will turn up some sources to clarify this point.

Even more frustrating is the lack of any name for Gabriel’s father. The book we are looking at is unclear whether even the surname of Sprung belonged to the biological father or the foster/adoptive father. One strong implication is, that the mother was an American, and probably not married to the soldier father. A possible scenario is that the father was stationed in the colonies, and returned to the British Isles, before the Revolutionary War.

I identified one possible adoptive father in the book “Loyalists in the Southern Campaign of the Revolutionary War,” by Murtie June Clark. From a transcription of a muster roll: 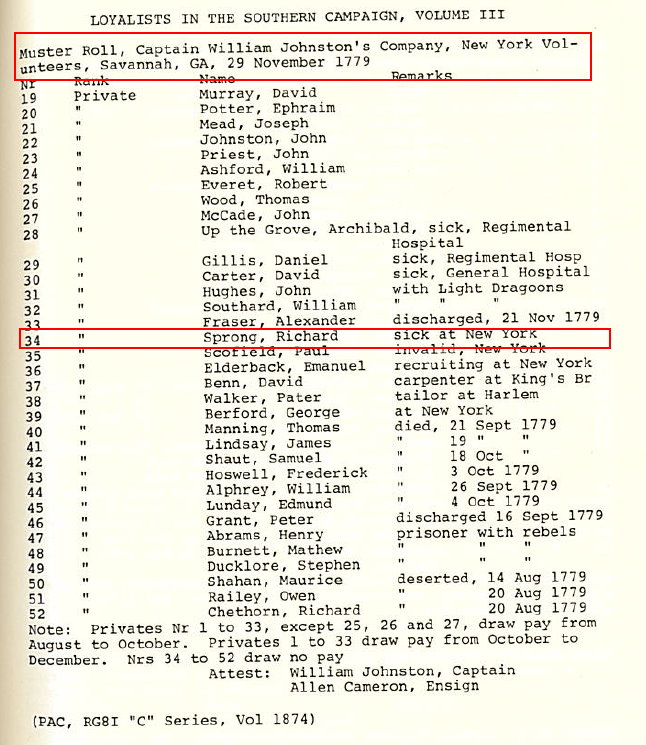 Since the given name of Richard seems very important among descendants of Gabriel Sprung, this seems like a good candidate.

If, as the passage reports, Gabriel Sprung’s biological father, still unnamed, was a British regular (from Ireland), he joins Philip Myers as a direct ancestor involved in the Revolution, but this one was on the opposing side!

Gabriel and Maria had nine known children. The second and third, my third great-grandfather David and his brother Richard were extremely close. They farmed as full partners for nineteen years while they raised their young families, then separated most amicably, dividing their assets in a single hour of discussion, with no hint of dispute.

An anecdote on David appears in “Pioneer Life:”

David Spring was well known in the county as an officer in the militia and a Methodist local preacher. Late one Saturday night he was ordered to have his company paraded at Roblins Mills on the Monday morning. As he had to preach at three different places on Sunday he told his son to take horse and warn the men in his stead. The whole company paraded on time and volunteered to a man. Among the names of the members at random are … Richard and William Sprung [two of David’s sons]. Not only did David manage to parade with a full complement of men on the Monday morning, but he also attended to all his ministerial duties on the Sunday.

It is not clear which of David’s sons, perhaps more than one, went to warn the militia company. His second son Richard (named after David’s beloved brother), may have been one of them. This younger Richard was the second of fifteen(!) children of David Sprung, the first three with his first wife, Sarah Wood. Richard farmed first in Huron County, western Ontario, where my great-grandmother Hattie Sprung was born. Richard’s wife, Anna Hudye, was born in Ireland. From Huron County, they immigrated to the United States. You can follow the family by clicking here for Hattie’s story with her husband, William Drayer.