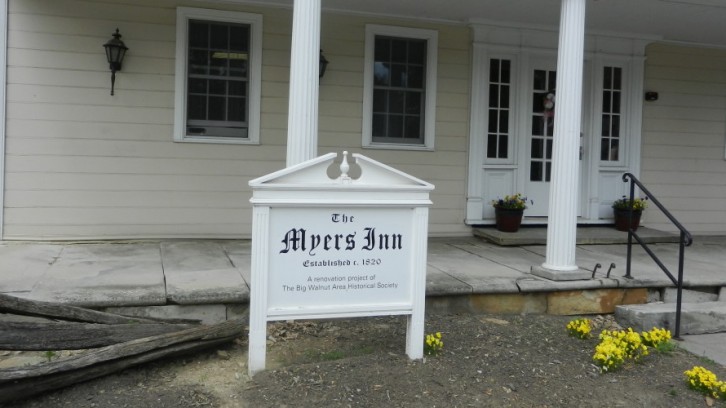 My third great-grandfather Lawrence Myers (no known middle name) was born in Luzerne County, Pennsylvania, on 28 June 1794. He was the second of ten children of Philip Myers and Martha Bennett. Click to view his profile in the family tree. His given name was after his uncle, Philip Myers’ elder brother, who had also settled in the “Wyoming” valley of Luzerne County, and who had no children of his own. The name “Lawrence,” with no middle name, became an important one in the family, given to one and only one male in each generation, a custom that holds to this day.

When this Lawrence was born, northeastern Pennsylvania was on the western frontier, despite being barely 100 miles from New York City. By the time he reached adulthood, the frontier was further west, offering fresh opportunities for young adventurers. Ohio was a hotbed of new settlement, and Lawrence, along with his brother William, moved to Delaware County,

There, in 1816, the two brothers co-founded the town of Sunbury. For his residence, Lawrence built a one-room cabin, facing the central square of the newly planned and platted town. On 18 May 1817, Lawrence was married to Eliza Brown, daughter of an even earlier settler in the county, Major Thomas Brown.

Sunbury turned out to be a strategic location for a stagecoach inn, as it was on a main travel route, about one day by coach from the state capitol. His father had made his mark in Pennsylvania as an innkeeper, and Lawrence Myers resolved to follow suit. By 1820, he had established a travelers’ inn, attached to and eventually surrounding his initial log cabin. The inn became a profitable business, which continued to thrive long after its founder’s untimely death. After many renovations, and one partial destruction by fire, the building was renovated by the local historical society. It is now a community museum, named the Myers Inn, after its original proprietor (it is not known to have used that name, even during its time under Myers’ ownership). The basic structure of the building dates from around 1880, a full half-century after Lawrence’s death. It was renovated by the local historical society and opened as a museum in 1994.

Deep in the center of the building, beneath floor level, renovators made a remarkable discovery: the foundation logs and hearthstones of the wood frame cabin that Lawrence Myers first built in 1816, 12 by 16 feet in size.. They rebuilt the hearth and created a replica of the cabin’s interior upon its original foundation.

Lawrence and Eliza had three children who survived infancy, the eldest was my second great-grandfather Henry Bennett Myers. Click here to read Henry’s story. Lawrence Myers died on 7 May, 1829, just shy of age 35. Eliza operated the inn for several years, before selling the property and moving with her son Henry to Oskaloosa, Iowa, where she lived until she passed away in 1855.

In addition to the Myers Inn museum, Lawrence is honored on this Ohio historic site marker, located in the town square, within sight of the Inn.

In 1827, Lawrence purchased a bible, which has become a family heirloom, and is now in possession of his third great-grandson, the one named Lawrence Myers.

I have not seen the bible myself, but received photocopies of the family history pages, filled with births, marriages, and deaths from Lawrence’s birth in 1796, up to the 1920s, including all or most of his descendants to that time.

Lawrence is buried in Berkshire Cemetery, a few miles west of Sunbury, as are Eliza’s parents and many relatives.

Eliza herself is buried in Oskaloosa, beside her son Henry.