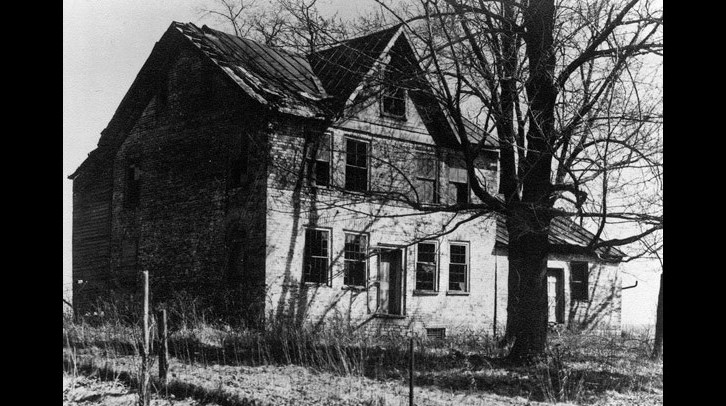 These are my fourth great-grandparents via the Myers family; twice over, as explained below.

Thomas Brown was born in Warren, in central Massachusetts, on 20 November, 1769. He married the widow Elizabeth Lynds Lyons in Warren on 8 February 1791, They then moved to the Berkshire Mountains of western Massachusetts, where several of their children were born. Click here to view their place in the family tree.

Their sights were set even further west, however. In 1806, they were the second settler family to arrive at the newly platted township of Berkshire (named for the former home of the founders) in the newly opened frontier of central Ohio, later a part of Delaware County. The Browns had traveled seven hundred grueling miles; for the last twenty or more, literally following the ruts of the first wagon, on a newly blazed track through dense forest. Altogether, nine families settled at Berkshire the first year, with many more to follow, including the “town’s” founder and developer, entrepreneur Moses Byxbe. Byxbe and Brown made grand plans for the town of Berkshire Corners. with hopes it would become a county seat, or even the capitol of the future state of Ohio.

In 1811, Thomas Brown built the first brick house in the township, a structure that was still standing in the early 2000s.

Unfortunately, by this time, a bitter falling-out had ensued between Brown and Moses Byxbe. Unbeknownst to his settlers, Byxbe quietly sold off nearly all of his Berkshire land, and secretly entered into partnership with a certain Judge Henry Baldwin of Pittsburgh, PA. Baldwin had title to, but had never visited, some 16,000 acres at a prime riverfront locality about ten miles west of Berkshire. In 1807, Byxbe and his family moved out of Berkshire township to the new location, which was to become Delaware City (and the county seat, due in large part to Byxbe’s lobbying).

This was a most unwelcome development for the Berkshire settlers, and Thomas Brown emerged as their leader. Brown and his followers opposed Byxbe’s moves at every turn, some of which involved their own underhanded dealing and double-crosses. Ultimately, they failed; Delaware City blossomed, and Berkshire Corners never got to first base. Another thread in this drama involves the groundwater in Berkshire corners, which was said to be contaminated with naturally occurring sulphur.

A “major” kerfuffle concerned Thomas Brown’s campaign to be Major of the county’s militia. His opponent was none other than Moses Byxbe, Jr(!). It seems that this was an elected position, and that the junior Byxbe (albeit with baggage of his own) won the election, but that Brown challenged it at least twice. According to a scathing letter written by Byxbe Jr. (not necessarily reliable),  on one occasion Brown’s followers appeared with their muskets loaded and primed.

At one point, Brown was appointed Major by the governor, but lost the post within weeks. This seems to be the sole basis on which Thomas Brown could have claimed the title of Major. He served sporadically in the War of 1812, but never rose higher in rank than Sergeant.

Thomas Brown died on 25 July, 1816, at the age of 47. He is buried in Berkshire Cemetery, where his gravestone was barely readable in 2013. Most of the oldest monuments in the cemetery are in similar condition.

Just two miles to the east, still within Berkshire Township, the village of Sunbury fared a good deal better. There, at a strategic point along a well-traveled wagon road, my third great-grandfather Lawrence Myers came from Pennsylvania, along with his brother William, to found the town in 1816, the year of Maj. Thomas Brown’s death. The following year, Lawrence married Thomas Brown’s daughter, Eliza. Click here to read their profile.

Two of Maj. Thomas Brown’s sons deserve some remarks. The youngest, Col. Thomas Jefferson Brown (1802-1831), is also my third great-grandfather, due to a marriage of two cousins in the next generation. His “Col.” designation is even more curious than his father’s “Maj.” The younger Brown died at the age of 29, seemingly too young to attain the rank of colonel, especially under the peacetime conditions of the period. His wife died one month later, aged 27. Like his parents, “Col.” Brown is buried at Berkshire Cemetery.

The eldest son, Elam Brown (1797-1889), was another pioneer. He led a wagon train to California in 1846, two years before the gold rush began, acquired a large land holding east of San Francisco Bay, and founded the town of Lafayette. There is a great deal in print about Elam Brown; including the remarkable factoid that his wagon train, after encountering hardships, illness, and several deaths, made their treacherous passage over the Sierra Nevada, only days ahead of the ill-fated Donner Party. Elam Brown is buried with numerous family members, at an elaborate memorial in Martinez, California city cemetery.