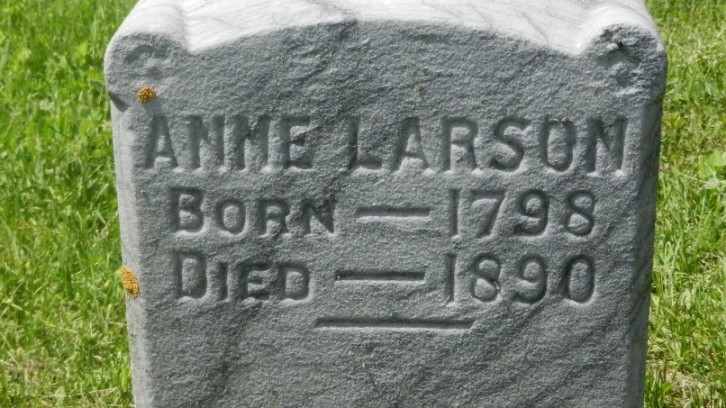 My great-great-grandmother, mother of Ole Larson. I should explain my choice of names for this honored ancestor. Skurdal refers to the farm where Anne was born and lived for many years. To the best of my knowledge, she never used it in America. Anne was the matriarch of an immigrant family consisting of Ole Larson and three of his sisters. All four of those offspring issued families of up to thirteen children each, most of whom raised large families in their turn. In spite of the twentieth-century slowdown in family sizes, her descendants today must number in the thousands. There are over a thousand in my database, where some lines have not been updated for decades. Click here to view Anne’s place in the family tree.

She was born early in the year 1801 (not 1798, as on her gravestone), and baptized on the 8th of February. Her father was a tenant farmer under Skurdal, probably at a place now called Davidhougen. Tenant farmers, or husmenn, were the poorest of the rural population. Below is building (photographed in 2011) at Davidhougen which I imagine is at least as large and sturdy as the dwelling of a husmann family was, back in the day. N.B. The yard would not have been so overgrown, as every foot would have been either cultivated for food (mostly potatoes), or grazed by the family cow, or goat for the less prosperous.

Anne was confirmed on the second Sunday after Trinity, 1815. She married Lars Paulsen Flaate on 20 June 1820. They lived at Skurdal, probably on the same tenant farm where Anne was born, to raise their own family. I say “probably,” as tenant farm names are quite informal, and fluid. Various records show at least three variants of “Skurdal” as their farm name, but it is doubtful they moved so frequently, if at all. Note that Lars lost his surname of Flaate and took on forms of “Skurdal,” where he now lived. Read Lars’ profile for more on his birthplace and early life.

Six children were born to Anne and Lars between 1822 and 1837. Four, all daughters, were surviving during a great region-wide famine in 1835-1839. In the winter of 1839-40, Anne Larsdatter allegedly stole some food and clothing for her family. Court documents show that her case went through two appeals before she entered Oslo prison in June 1841 to serve an 8-month sentence. At that time, she must have been about three months pregnant. Read more about the crime and prison term …

Parents are Lars Paulsen of Skurdal and wife -Prisoner for 8 months- Anne Larsdatter of Fron parish.

Mother and baby were released in February. They traveled home by horse and sleigh, the fastest method available, a journey of eight days or longer. A modern analogy would be a 40-year old mother and two-month baby traveling eight days in a taxicab. Of course, the cab had no heater, and only cloth on the windows. Anne would have been issued a passport, which was required even for domestic travel. Hers would be clearly marked as a convict out of prison, assuring them of the worst possible accommodations and treatment, and constant suspicion. In Les Miserables, Victor Hugo wrote of his hero’s “yellow” passport.

Anne’s name is not seen again in any Norwegian records I have found. She is conspicuously missing from the parish emigrant list that recorded the departure of Ole, Mari, and Marit in 1865. But she appears on the passenger list of their ship, the brig Atalanta. Read more about the journey …

Anne Larsdatter lived in Wisconsin for the remaining 25 years of her life. She was enumerated in the 1880 US census with Mari (Larsdatter), Mari’s husband Hans Hanson (alt. Stigen),  and family. Anne Larsdatter died on 11 March 1890, and is buried with the Stigens at Brush Creek Church.