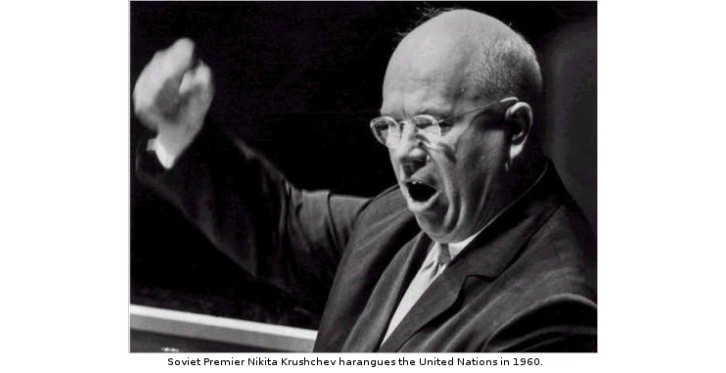 No close family anniversaries. One of the more amusing incidents of the Cold War occurred in New York on this date in 1960, at the United Nations General Assembly. Nikita Krushchev. the Premier leader of the Soviet Union, became enraged at one of the speeches and launched a tirade at his desk. It was reported in the news, and many witnesses recalled, that Krushchev banged a shoe on his desk during the ourburst. Later searches have failed to produce any photo or video evidence of the shoe-banging. The widely circulated news photo was a faked version of the image at top, with a shoe added.

Not a very convincing fake, at that. Surely he would not bang the table with the top of his shoe. Still, with so many witness reports, it is likely that some shoe-banging really did occur. I was about thirteen at the time, and vividly recall the news stories about this event.