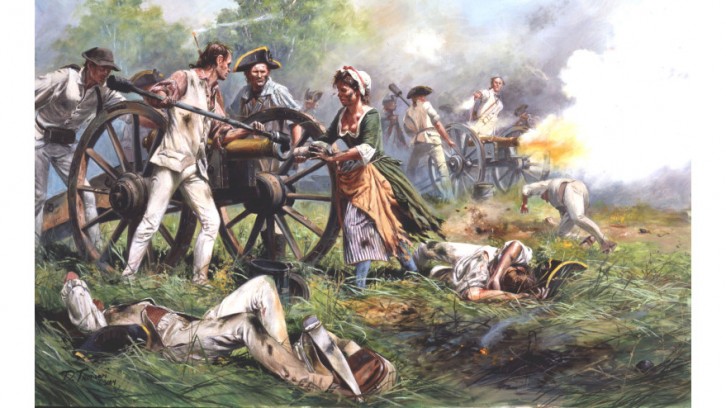 No close family anniversaries. Born in Philadelphia, Pennsylvania on this date in 1744 (? date is controversial, possibly as late as 1754): Mary Ludwig (m. Hays), known in folklore as “Molly Pitcher.” While her exploits have been exaggerated in the telling, and some tales undoubtedly refer to other characters, real or fictional, her role in the Revolutionary War battle of Monmouth, New Jersey, June 23, 1778, is well-documented. Her husband, William Hays, was an artilleryman in the 4th Pennsylvania regiment. Molly accompanied him as a “camp follower,” performing cooking, laundry, and other domestic services during the famously miserable encampment at Valley Forge through the winter of 1777-78. During battles, camp followers often carried water to the field, for the soldiers to drink, and also to cool cannon barrels and moisten the loading swabs. The nickname “Molly Pitcher” probably arose from those duties.

During the Battle of Monmouth, William Hays was wounded, or collapsed from heat exhaustion. He was not killed, contrary to some versions of the tale. As Hays was carried from the field, his wife took his place at the cannon. For the rest of the day, in 100-degree heat (added to the heat of battle), Molly “swabbed and loaded” the gun with her husband’s ramrod. Having observed her at the task, General George Washington the next day issued her a warrant as a non-commissioned officer. For the rest of her life, she was known by her other nickname, “Sergeant Molly.”  Top photo from a painting by present-day historical artist Don Troiani. After William Hays’ death years later, she married one John McCauley. The monument shown below stands at her gravesite in Carlisle, Cumberland County, PA. 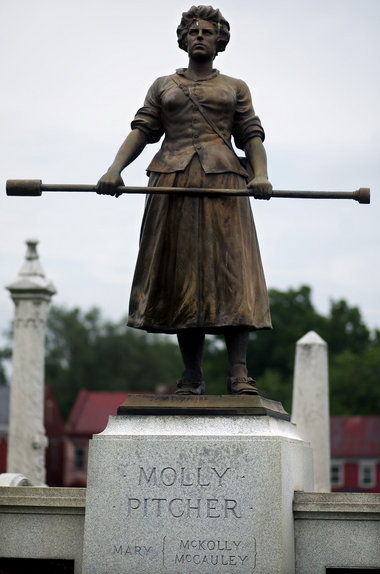