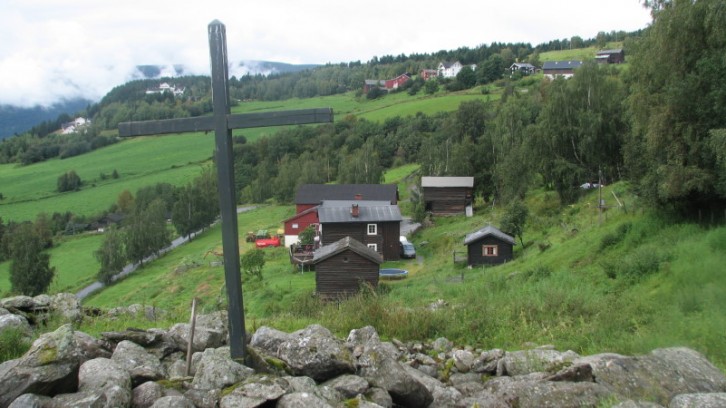 Died in Nord-Fron, Norway, on this date in 1797: third great-grandfather Paul Svendsen Lillegard. Top photo: Paul’s birthplace, the farm Lillegard. I photographed it in 2011, looking down from the “kirketuft,” the site of an ancient church, only recently rediscovered.

Paul Svendsen was the second son of Lillegard’s owner, so did not inherit his father’s farm. He did scrape together enough money to buy the farm Flaate in 1776. Unfortunately, when Paul died, he left behind a widow, nine living children, and a mountain of debt. Flaate was lost to the family, who descended into even deeper poverty. The skifte (probate) document settling the estate was found online by my mentor Pål Kjørstad.

Our second great-grandfather Lars Paulsen (father of Ole Larson) was three years old when his father died. Like the other male children, Lars received an inheritance of four riksdaler from the estate, approximately the value of a cow(!) He lived his adult life and raised his family (including Ole) as a husmann (cottage tenant) at the farm Skurdal.