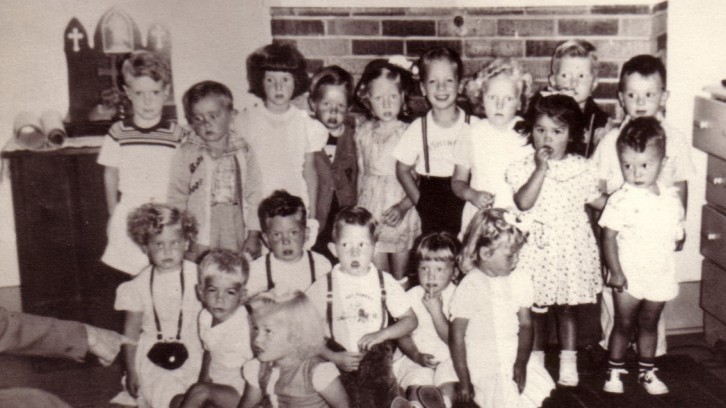 Revisiting some old movies, now that a few more readers are following. This batch is some of the earliest, sent me by Cousin Myrna. Uncle Walt was on the job as videographer by approx. 1942, several years before my parents caught the bug. In the earliest scenes: Lois, Kenny, and Darlene:

Below, Irene with birthday cake (?-don’t know whose; Lois’ 6th is coming later); Lois & Ken’s tea party, and some men fishing for smelt with dip nets on the Cowlitz River. The one in the hat is my Dad(Lovell), age about 27. Enjoy.

From approx. 1949, Myrna, Marcia, Irene and her parents (I think), Kenny and George in parade costume, etc.

Then about 1956-57, Walt, Marcia, Myrna, Lois, Kenny. Cut to the only picture I know of in which Grandpa Larson has a big grin on his face, followed by some more showing-off by George, with Ron, Marcia, and Ivan in the background. Never let it be said that I only embarrass others with these clips, and spare myself! Oh well, if it made Grandpa laugh, it was worth it!