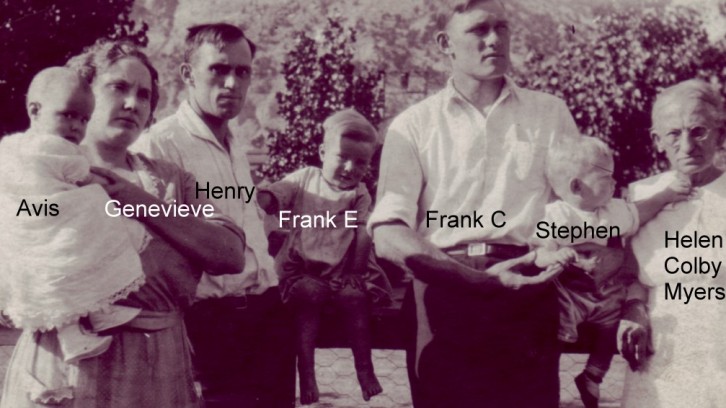 My granduncle, the youngest brother of Dan Myers; other siblings were Harry E, Lawrence, Leonora B, and Henry B. Most of the facts given here come from a typewritten “personal history” Frank prepared late in his life. I received a copy from Jody Boyd, as part of her study of Frank’s grandfather, Harry Eugene Colby. A copy of Frank’s manuscript is posted here.

Like all of his siblings, Frank C Myers was born in Onawa, Iowa. Click here to view his page in the family tree. He left Onawa in 1910, having finished public school, and worked at construction jobs in several locations. He attended Iowa State College at Ames “for a short time,” and traveled to California for the Pacific International Exhibit in 1915. Below is the earliest known photo of Frank C. Myers, taken shortly before his father’s death in 1917.

Frank Colby Myers married Mildred Dyer on 06 March 1920. Their only child, Stephen Dyer Myers, was born the following year. Parents and child were estranged at some point, for unknown reasons. Stephen died without issue in 2016, leaving no descendants of Frank and Mildred. In the top photo, Frank and baby Stephen are shown with Frank’s mother, and his brother Henry and family.

Frank enlisted in the US Marine Corps in 1916, at age 24. World War 1 was raging in Europe, and US intervention was being hotly debated. Before America entered the war in April 1918, Frank had been promoted to First Sergeant. But instead of heading for the front, he was ordered to Officers’ Training School, from which he graduated as Second Lieutenant in July 1918.

On September 1, Frank Myers was promoted to First Lieutenant and sent to Santo Domingo, which was then a US occupied territory. At just this time, the first American forces were engaging in combat in Europe, marking a decisive turn that quickly led to the armistice of November 11. Without having seen combat, Lt. Frank Myers was discharged from active duty, but continued as a reserve officer while pursuing his civilian career, about which more below.

In November 1940, Frank’s reserve unit was called to active duty, in the run-up to WW2. By then (21 years after his previous discharge from active duty) he had reached the rank of Major. More promotions soon followed. In April 1945, as a full Colonel, Frank commanded a shore party of engineers in the US invasion of Okinawa. The Battle of Okinawa was a grueling 81-day fight; the bloodiest in the entire Pacific campaign, with almost 50,000 American casualties, and twice that number of the enemy.

After the Japanese surrender, Frank’s unit was deployed in North China. Some months later, Col. Frank Myers was relieved of his command and hospitalized for several months. His summary does not give the cause, whether from injury or illness. He was discharged from active duty in November 1946. When he retired from the reserves in 1953, he had attained the rank of Brigadier General.

In addition to military service, Frank became determined to pursue a parallel career in civilian life. In 1925, he was hired by the City of Oakland, as a junior engineer and draftsman. The city provided liberal leave and support for his Marine Reserve duties. He rose through the city ranks, completing his formal studies along the way. After completing his examinations, he was registered as a civil engineer buy the state of California in 1930. When he took leave for military service in WW2, his title was Acting Traffic Engineer. After “that” war, Frank rose to the post of Supervising Engineer, in charge of the Structural Division for the City of Oakland.

Frank retired from the city in 1953, after 28 years minus military leave. He and Mildred moved to the San Diego area, where they lived on a small avocado farm, while Frank was also active in community and civic affairs. My mother’s photo collection included a snapshot of Frank and Mildred, taken in the late 1960s.

It would appear this was taken on a visit from my parents, at their farm. There is a companion photo of my father, Lovell, with Uncle Frank (actually Dad’s uncle-in-law).

I (George) was no longer traveling or living with my parents at this time. Indeed, I don’t recall ever meeting Frank or Mildred, or even hearing Mom talk about them. But a poignant recollection of him, also from the late 1960s, was related to me by Mom’s cousin, the late Gail Myers.

… somebody knocked on the door of the Pres[ident’s] manse at Monticello College in Godfrey IL where I was reigning monarch. When I opened the door I saw almost a ghost of my father. The man introduced himself as my Uncle Frank, whom I knew about because he had achieved some prominence in his lifetime my dad and then my mother talked about. He had decided to look up Larry’s kids and found my name listed somewhere and could track me down easiest he explained. He stayed overnight and another day with me. He explained he had a terminal illness (un-identified) and owned some family items he would like to get into hands of some members of the family who cared about the Myers line. Very openly and casually he told me that his own children wanted nothing to do with him or keepsakes and other artifacts he owned — how did I feel about it? He seemed quite rational and although thin (partly why he so closely resembled my dad who was sick much of my growing up) and good sense of humor and a delight to talk with. I knew enough about his city engineer in Oakland and as a Marine to probe more on those items.

Never said anything further about the estrangement from kids, and I did not even know who they were since I had no contact with him before that. Not long after he’d gone home a big box arrived and inside was a child’s rocking chair which was made by hand for him by his [maternal] grandfather, a box of a few other artifacts including a 20-dollar gold coin given to him by his older brother and a handmade sheath knife (like a Bowie) and leather scabbard with his initials burned on it which had been made for him out of a steel file and ringed heft by some of his Marines when he retired from his command — he was a Brigadier General in the Marines at one time. We hadn’t talked about what he was sending but he explained all the contents in a letter which I’ve subsequently lost but the items are in good hands. …

Frank’s death date (and Mildred’s), were found in the Social Security Death Index. I have located no obituaries or burial information for either of them. Since they have no living descendants, I offer this brief remembrance. R.I.P. Frank and Mildred.