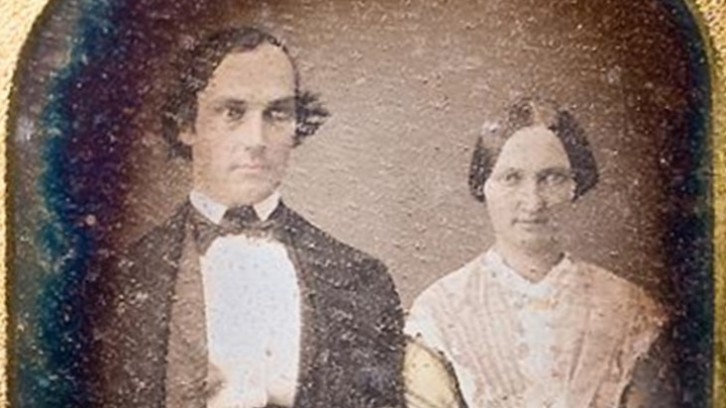 My second great-grandfather was born in Sunbury, Ohio, on 15 November 1819. Click here to view his place in the family tree. His father, Lawrence Myers, and uncle William, had recently co-founded the town of Sunbury, Lawrence had built a log cabin in the center of town, around which he would soon build a large inn for stagecoach travelers, which has more recently become a community museum.

In the center of the building, restorers found the hearth and foundation of the original cabin, 12 by 16 feet, as described in old documents. They rebuilt the hearth and reconstructed what they call the “1816 Room,” after the year in which the cabin was first built. This created a replica, in the very same space, of the spot where Henry was most likely born.

Henry married Leonora Brown on 25 August 1847. Leonora was Henry’s first cousin; her father was a brother of Henry’s mother, Eliza Brown. Both of Leonora’s parents died when she was four years old (click the link to read of this in the profile of Leonora’s grandparents). I have not learned who raised her after that; one possibility is her aunt Eliza. If so, she would have lived as a stepsister of Henry before marrying him. An image posted anonymously on Henry’s FindAGrave memorial:

This is remarkably early in the history of photography. It had only been a decade since the daguerreotype process (the first commercially viable technique) was introduced in France. It was surprising to find this example made in what was then practically the Wild West of the U.S.

Leonora died a year after the birth of their only child together, my great-grandfather Stephen. Click here to read Stephen’s profile. Four years later, Henry married Fanny Myers, his first cousin on his father’s side, from his father’s hometown in Pennsylvania. The family then settled in Oskaloosa, Iowa, where they had three children.

From the archives at the Military History Institute in Carlisle, PA, I obtained this official portrait, to which I added the descriptive text.

Although these old photos can be deceiving, in this one I would say Henry looks a bit hollowed-out. Small wonder, that. The 33rd Iowa saw combat action in Arkansas and Mississippi, in particular a long bivouac and eventually a major battle at Helena, Arkansas. Read more about the Battle of Helena. Like many of the men stationed at Helena, Henry developed chronic dysentery, which in his case eventually proved fatal. Living conditions there were primitive and unsanitary, as documented in History of the 33rd Iowa:

These were not the most pleasant days in the world, even for soldiers. Though it seemed to rain most of the time, the cold was frequently severe ; and for want of any better accommodation, we had to go go to the woods and gather brickbats, pieces of wood, &c., and make chimneys to our tents. Teams were scarce – for us, at any rate – and we were compelled to go into the cypress swamps, some half-a-mile from camp, and bring up the wet wood on our backs, to burn. The mud was excessive; and as we were not yet provided with rubber blankets, and had not learned, by three years of soldiering, how to do without almost every thing, and “fix up”  in any circumstances, we were of course decidedly uncomfortable.

I can hardly imagine the complexity and stress the job of Quartermaster must have carried under such circumstances. While Henry’s own situation, as an officer, may have been somewhat better, what of the responsibility – and impotence – he must have felt for the conditions of the enlisted men? Henry received a medical discharge in March of 1864, and died at home three months later, while the 33rd was still fighting in Arkansas.

Our late cousin Paula Howell researched the efforts of Henry’s widow to enroll for her husband’s military pension benefits. Her findings were summarized in an email:

Henry’s widow [Fanny, his second wife] and the children Harry B. (b. February 13, 1858), Sarah E.(b. April 27, 1860), and Susan B. (b. November 20, 1861) all were involved in soldier pension details which [Paula] found and copied.  With a bit of difficulty Henry established eligibility for pension affirming that he was mustered October 1, 1862 and discharged with chronic dysentery March 16, 1864 after service in Helena, ARK and Yazoo, MISS, and other actions with the Iowa 33rd Volunteers.  His rank was First Lieutenant and assigned as Quartermaster.   The widow and the daughters with reams of paper and legal declarations carried on attempts to get arrears of pensions and other entitlements …

Interesting that his pension was only granted after “some difficulty,” even though it is well-documented that he served in a series of engagements. It is said that more men died of disease than in battle during the war as a whole. This was certainly true of the unfortunate soldiers stationed at Helena.

Henry is buried at Forest Cemetery in Oskaloosa, alongside his second wife Fanny, and his mother, Eliza (née Brown).

Just across the drive is a section devoted to the Grand Army of the Republic, with the graves of many more Union veterans of the Civil War.