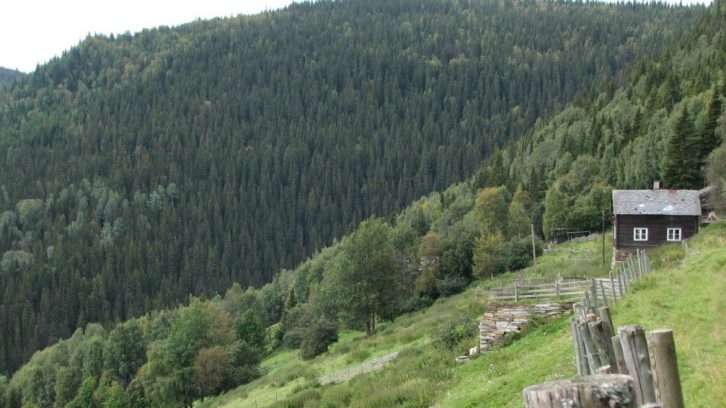 Father of Ole Larson, thus my second great grandfather, and the “Lars” from which our “Larson” surname sprang.. Click here to view his place in the family tree. Other than his name, little was known of Lars Paulson until cousin Aline started her research in the 1980s.

Lars Paulsen (alt. Poulsen, Paulson) was a son of Paul Svendsen (alt. Sveinsen) of the farm Flaate, which the father had purchased in 1776. This makes Lars the only one of my eight Norwegian great-great grandparents whose family owned any land. It was a very small parcel, to be sure, and was soon lost to the family, as we will see.

Lars’ birth date is not precisely known, as parish records were destroyed in a fire. Surviving documents put it around 1794 (with one exception). He was the sixth of seven children by Paul Svendsen’s second wife, along with two children by the first wife.

Paul Svendsen died when Lars was three, so the earliest document naming Lars is the probate of his father. Among other indignities, it reveals the deep debt held against the farm. The land and goods were auctioned off, with the proceeds going mostly to a long list of creditors. Paul’s widow and nine living children got chicken-scratch.

Here is a page from the skifte, roughly equivalent to “probate,” following the death of Poul Svendsen Flaate in late 1797. It names Lars Poulsen, then 3-1/2 years old, as one of the heirs. More interesting, it names several previously unknown siblings of his. Here is his name in context: (the full document can be seen at arkivverket) 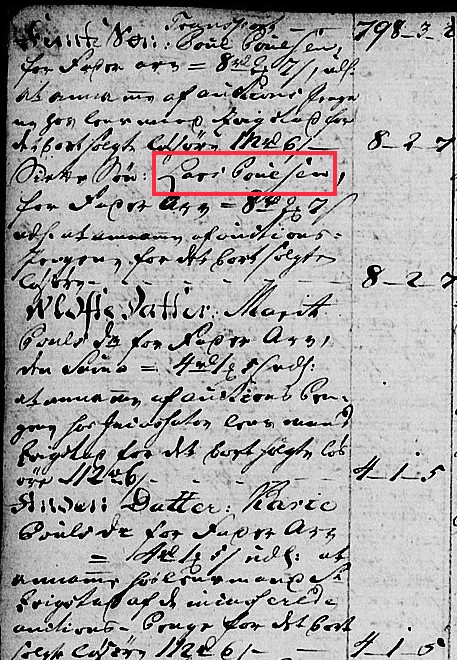 The entire family is as follows, teased out from this document and other sources by Pål Kjorstad:

All nine children were living in 1798, and each received a paltry inheritance. The six sons each received about one percent of the auction price of the farm, while each of the three daughters received about half that amount. By the 1801 census, only Poul, Lars, and Anne were counted with their widowed mother, Mari Pedersdatter, at Flaate. I found the names of a couple others who were servants on nearby farms. The rest of them must have moved away, too. I visited the Flaate farm in 2011.

By “birthplace,” I mean the land, not any existing buildings, pictured or otherwise. I may speculate on the age of a building, but even if it were old enough, there is no way to associate it with any individual.

I visited Flaate on my tour of Gudbrandsdal ancestral sites in 2011. The Flåtå farm (also spelled Flaate, or Flaade, as on the gravestone above) was occupied until a year or two before my visit, but is now abandoned. To reach it, we walked about a half-mile up an unused driveway. 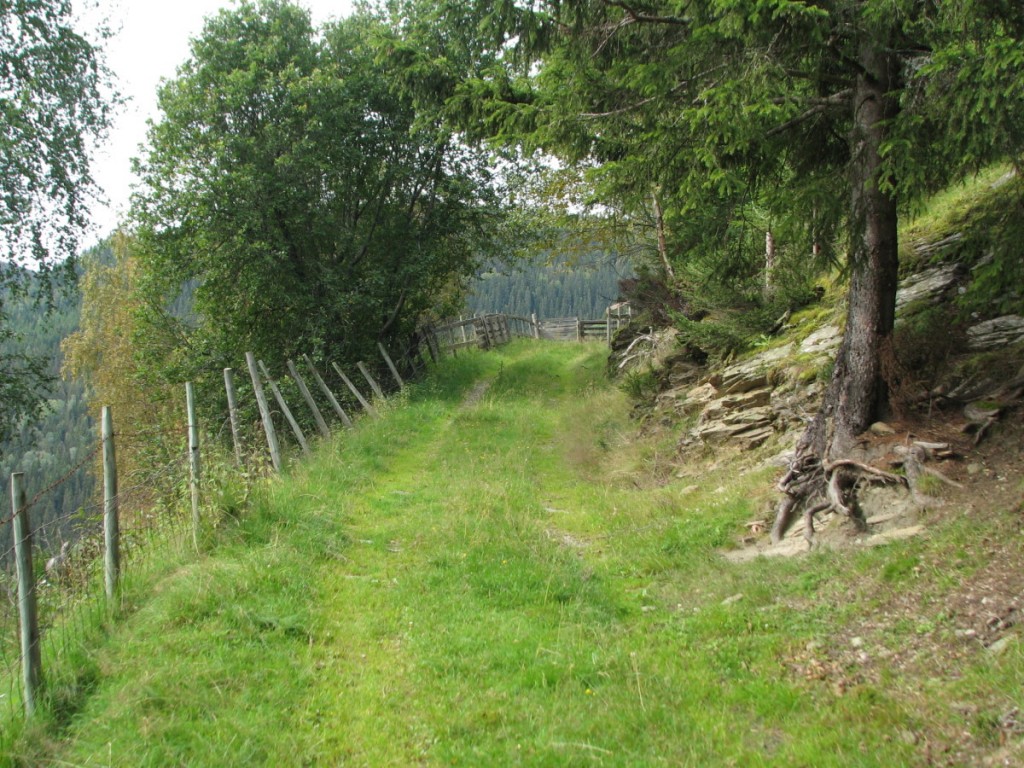 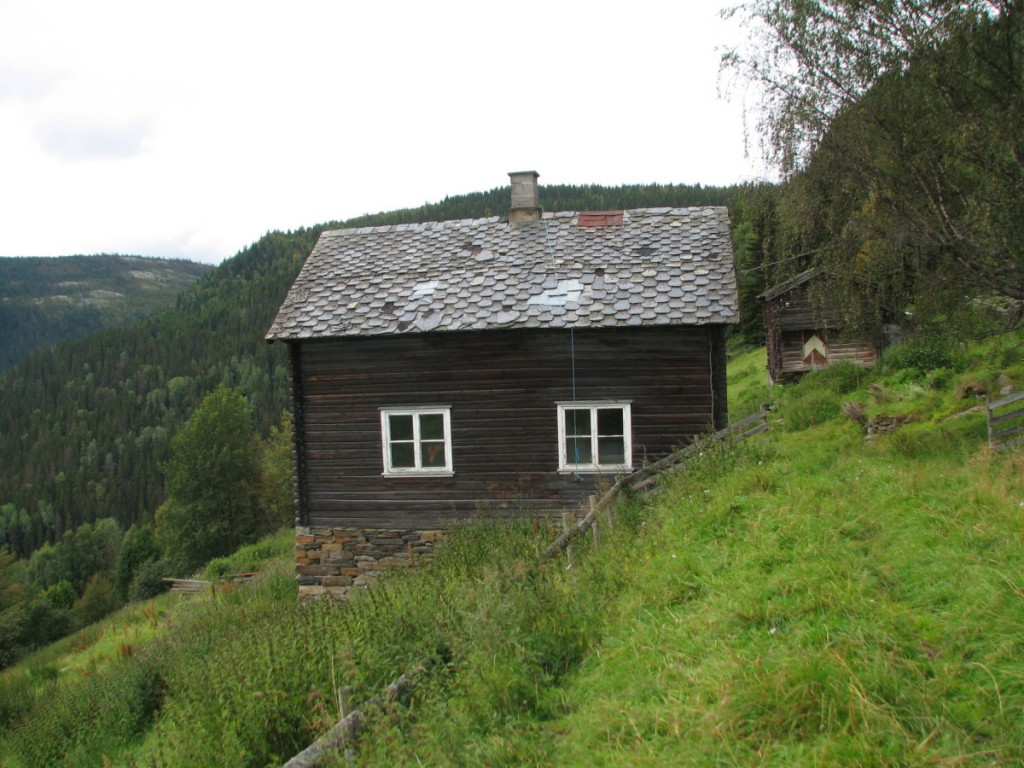 Based on the style of building, Pål estimated that the dwelling-house (foreground) dates from around 1900, over a century after Lars Poulsen walked this ground as a child. Note the extreme steepness of the cleared land. This is not very unusual in Norway, but unheard-of for farms in America. Here is a view across Flåtå’s overgrown fields toward two larger farms below. 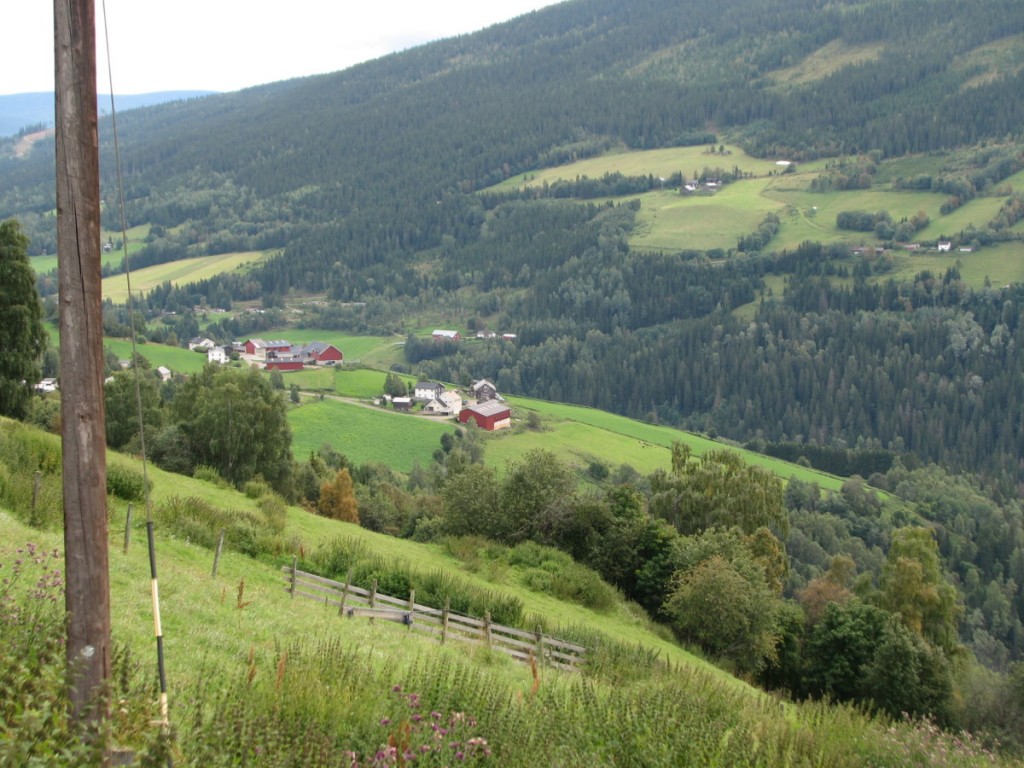 The second building on the property, probably a storage shed or barn, is much older than the house, and though it’s a long shot, may even date from Lars Poulsen’s time. 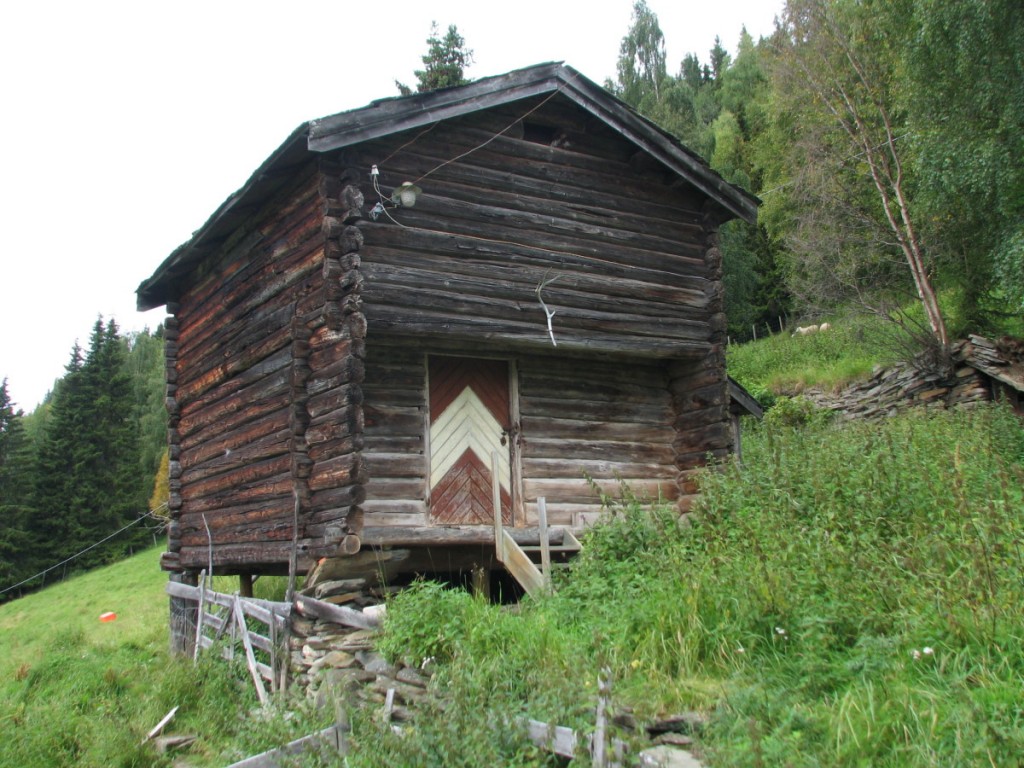 Finally, the ruins of a root-cellar or underground barn. The earthen roof has caved in. This structure really does look like it could be as old as Lars Paulsen. 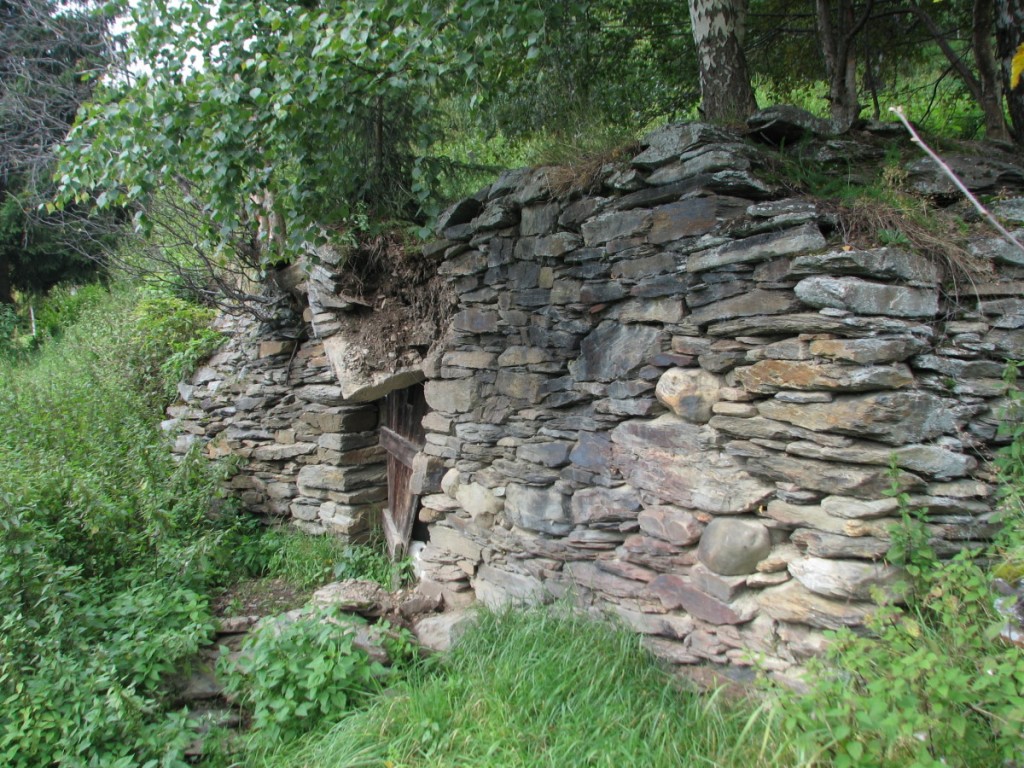 As I mentioned, Flåtå was lost to Lars’ family after his father died in 1797. While Lars, his widowed mother, and two of his eight siblings were still living there in 1801, they probably left soon after. In the census of that year, there were fifteen people at Flaate, including the three members of our family. Further reflection has convinced me that the farm included more land than the steep highland fields I visited that day. Some of the flat ground below was probably part of Flaate when Lars lived there.

Lars Paulsen was confirmed on 7 May 1809, at age 16. His residence at the time was Rulland (alt. Rudland). He was probably working as a servant, which category includes farm hands, if they live on the property. Lars’ sister Anne Paulsdatter later married and lived at Rulland. 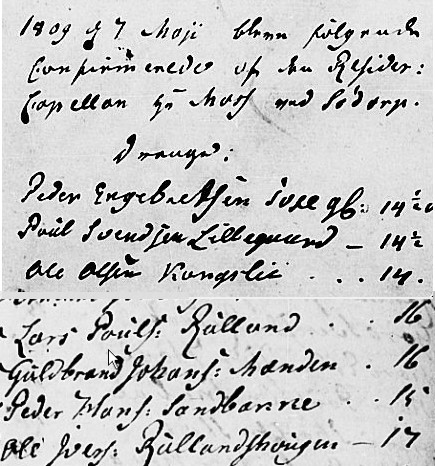 Lars Paulsen was married on 20 June 1820, to Anne Larsdatter of the Skurdal farm. His age was given as 26, and hers as 20, further bolstering Lars’ presumed birth date of about 1794. He lived the rest of his life as a tenant farmer on Skurdal. For more details on the marriage and family, see Anne Larsdatter’s profile.

On 15 February 1855, Lars Paulsen passed away; he was buried on the sixth of March, probably at Sør-Fron church, although no monument remains.

Of my eight paternal great-great-grandparents born in Norway, Lars is the only one who died there. The other seven are buried in Vernon County, Wisconsin.