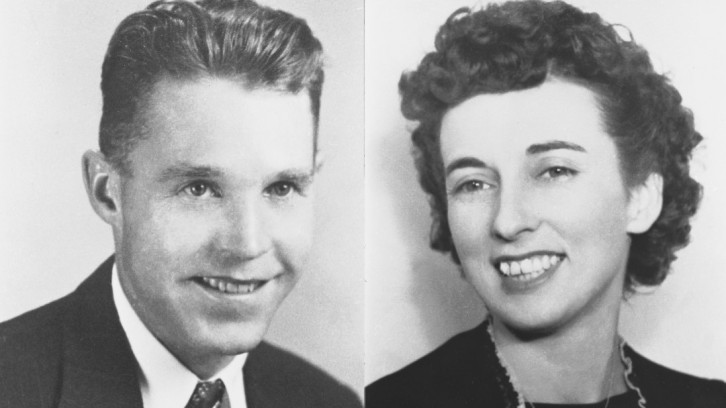 My mother, Reatha May Myers, was born 23 May 1914, in the living quarters behind her father’s general store in Thunder Hawk, South Dakota. A month later, on 28 June, my father, Lovell Darvin Larson, was born in hospital at Sidney, Montana. Click here to view their place in the family tree. Their early lives are detailed in the profiles of their parents, Reatha’s and Lovell’s.

They were married (eloped) in eastern Montana on 10 Dec 1934, and traveled immediately to the West Coast, in a jalopy that Dad had rigged to quickly convert for sleeping alongside the road. 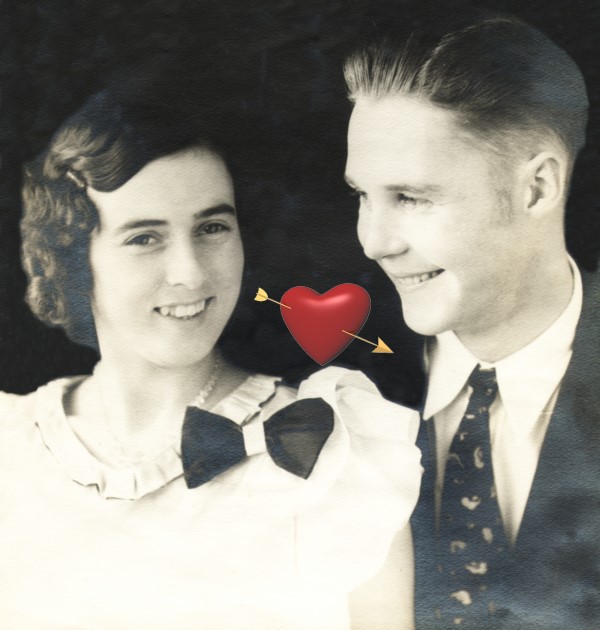 It was the depth of the Great Depression, but work was relatively plentiful in the woods and lumber mills of the Pacific Northwest. After a brief stay in the Portland area, Lovell and Reatha settled in Longview, Washington, where Dad soon found work at what was then the world’s largest sawmill, Long-Bell Lumber Co. Before long, his elder brother Waldemar (Uncle Walt) also settled in Longview; both brothers remained there to raise their families. Dad worked in Longview’s mills until shortly before his death. Mom often worked as a cook, including many years with the Longview Public Schools.

At first, Lovell and Reatha lived in a tiny “company house” in the millworkers’ district. As Mom recalled, it had no indoor plumbing. Of course, the country homes where they were raised had none, either. Their first child, my sister Darlene, was born in hospital  09 July, 1935. 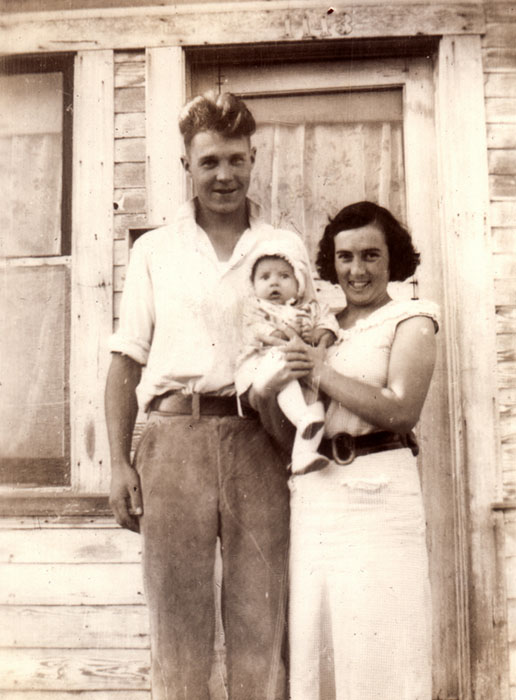 Over the next several years, they moved at least twice, and bought their first home on 15th Ave, still in the mill district. That is where they lived when I was born (also in hospital) 29 July 1947. In the interim, my parents housed and otherwise assisted all three of Dad’s younger brothers at various times, as they pursued their higher education and served in World War II. Here are Dad and me, grabbed from their earliest home movies. 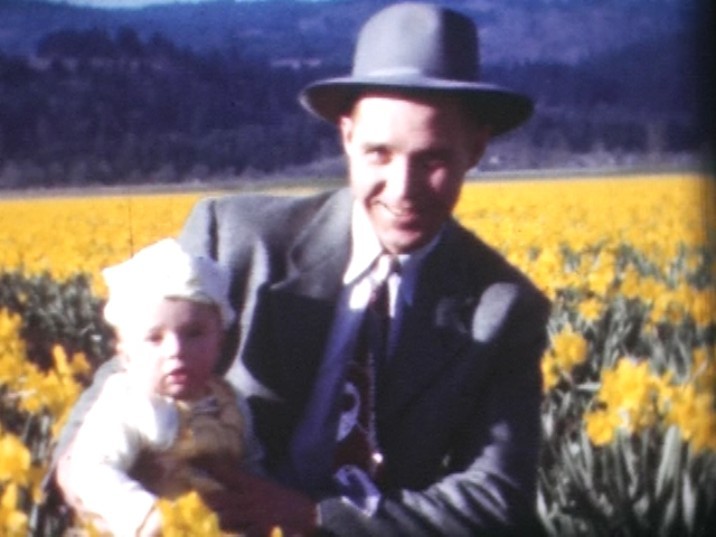 When I was two years old, Lovell and Reatha bought a house with land five miles outside the city. The photo below was taken much later, but the basic appearance of the house had changed little. 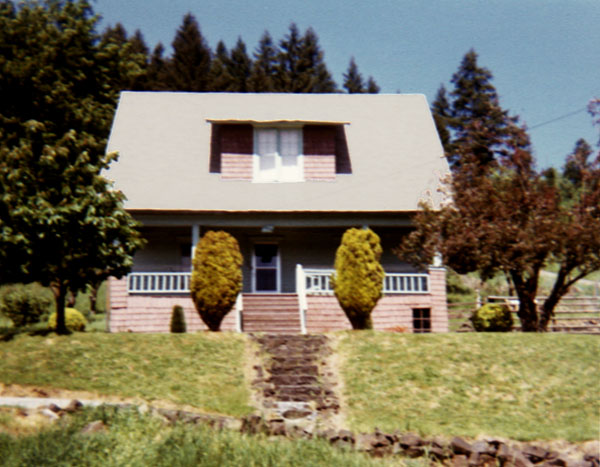 The three acres of land was on a hillside, with a steep, grassy pasture and a rickety old barn, even older than the house. In addition to his arduous work at the mills, Dad kept a milk cow and planted a vegetable garden. He also spent time helping Grandpa Larson, who kept another small, one-cow “farm” just a mile away.

My sister Bonnie, third and last of the children, was born 27 Jan 1953. When Reatha was asked why she had her three children over such a long span of 18 years, she replied that it just happened that way; she would have preferred to have children closer in age, and more of them(!) 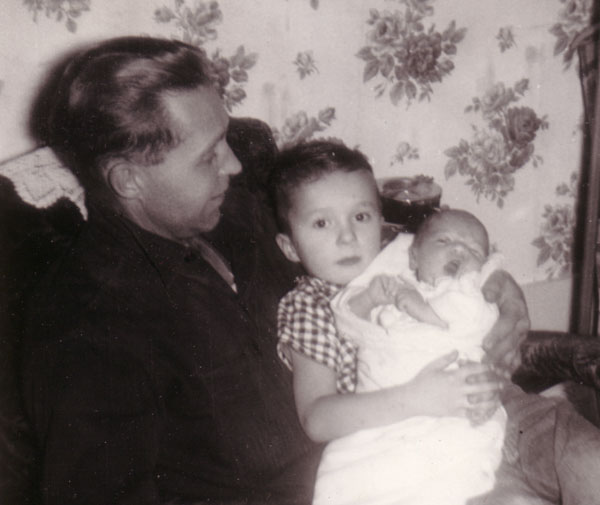 Dad loved hunting and fishing, and especially relished sharing the experiences with me. Our frequent companions were Uncle Walt and his son Kenny, several years my elder. The four of us also enjoyed playing pinochle.

Mother adored cooking and sewing, and otherwise taking care of the family, both immediate and extended. Probably her favorite gift ever from Dad was the new “Frigidaire Flair” range-oven he bought for her about 1960. She was still baking bread in that oven up to the time she left the house in the year 2000. In her heyday, our home was the venue for countless holiday dinners and family reunions. 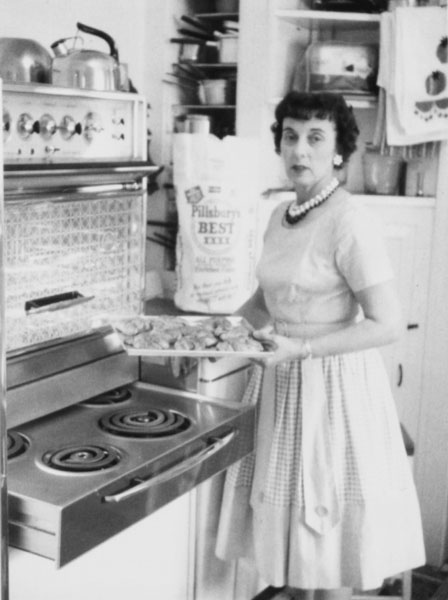 Mom also sewed costumes for the entire cast of dozens of school plays, dance recitals, and church pageants, and of course her own entire wardrobe, and most of mine and my sisters’.

Dad died of lung cancer at age 55. Mom stayed at “4316” another thirty years, until at age 87 her health would no longer permit it. She remained active and always giving, a much loved grandmother and great-grandmother. Her eldest grandchildren nicknamed her “MeMe,” and that is what she preferred to be called from then on, by both family and friends. Even after she could no longer live at the big old house, she still made quilts and other handiwork. 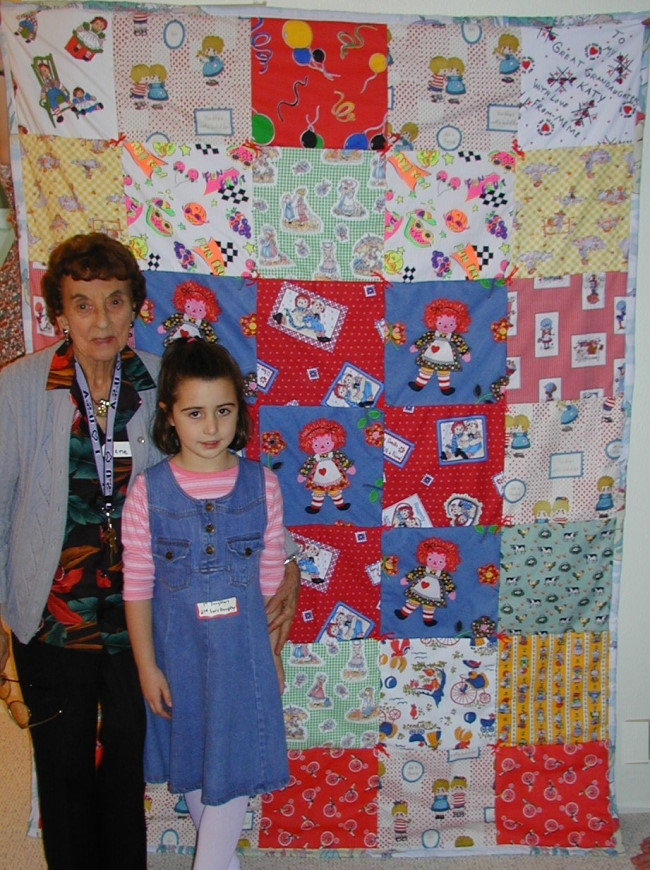 “MeMe” passed away in 2008, leaving three children, thirteen grandchildren, twenty great-grandchildren, and five great-great-grandchildren. I am counting several who are “step” relations; God knows that Mom counted them as dear as the biological ones. Dad is buried beside his parents in North Dakota, and Mom in Castle Rock, Washington. 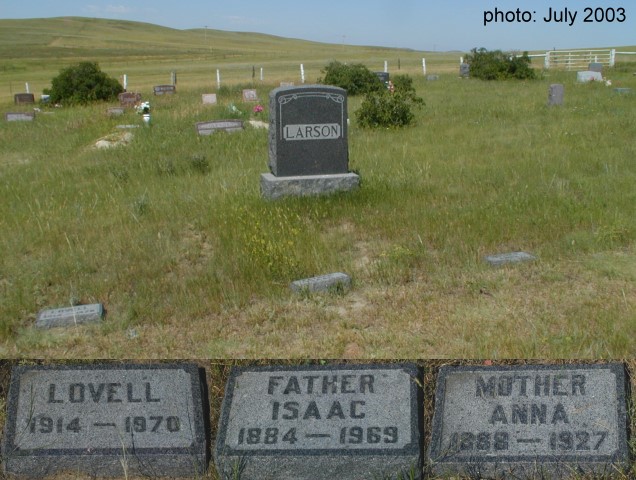 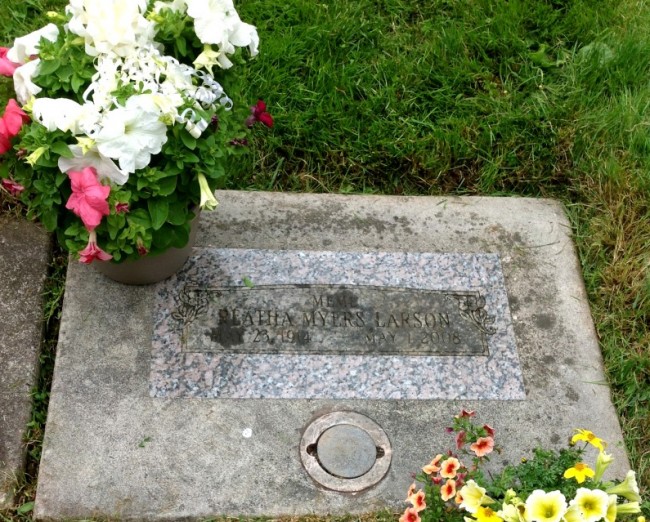