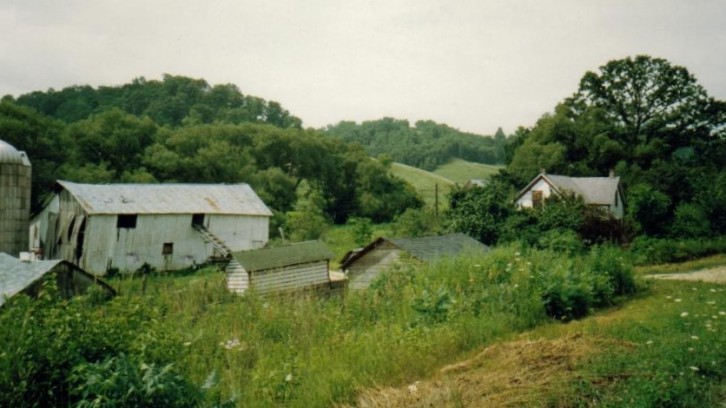 Great-grandfather, patriarch of the huge Larson clan (including descendants with surnames Sletten, Raiten, Lunde, and others), and namesake of this very website, Ole Larson was born on 10 December 1841, in Oslo, Norway, at the time called Christiania. His home, however, was 150 miles to the north, on the farm Skurdal, Sør-Fron parish, in the region of Gudbrandsdal. This is a rich farming valley, landlocked in the center of southern Norway, a part of the present-day county of Oppland. 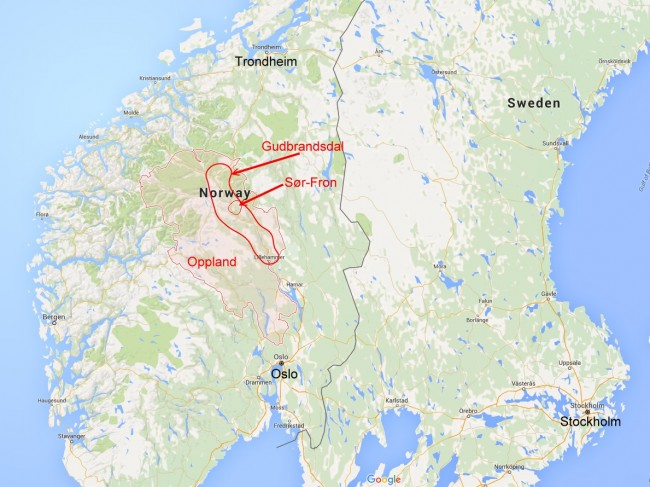 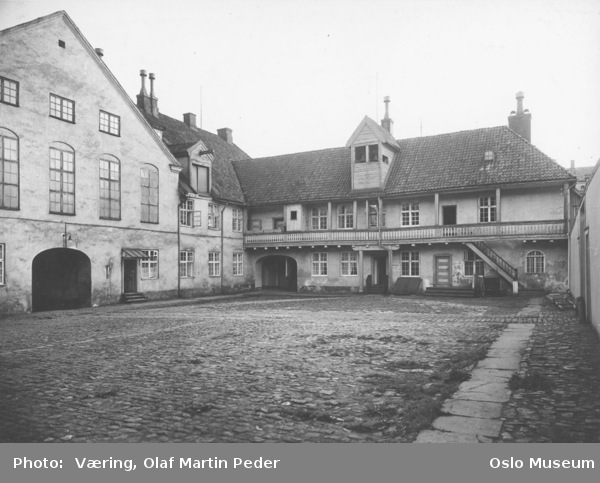 Under the circumstances, I wondered early on whether Ole’s father was really Anne’s husband, Lars Paulsen, as stated in his baptism record from the prison.

These doubts were laid to rest in 2014, by DNA evidence and the resulting contact with a distant cousin who is another family historian. Read more …

Let’s pick up on Ole’s story at his release from prison (along with his mother) in February 1842. Now two months old, Ole and his mother traveled home to Skurdal, to their large family and impoverished tenant farm. Norway was in the grip of winter, and there were as yet no railroads nor mechanized transport of any kind. Prison documents show they traveled by horse and sleigh, a journey of at least eight days. Roads were primitive at best, with few facilities for overnight lodging, least of all for a poor ex-convict.

Ole’s father, Lars Paulsen, died thirteen years later (1855), no doubt deepening the family’s poverty. Ole’s name next appears in parish records at his confirmation, in June 1857, age 16. Eight years later, he is next found on a list of emigrants leaving the parish, dated 19 April 1865. With him are two older sisters, Mari and Marit, bound for “Nordamerika.” With them on the journey, but not on the list (for reasons unknown), was their mother, Anne Larsdatter.

At 24 years of age, Ole was the youngest, but as the only male, was undoubtedly the “leader” of the family group, at least outwardly. One can only speculate that his 65 year old mother, or his elder sisters, may have had some influence on family matters. On the same ship were Hans Hanson and Engebret Johnson, who would later marry Ole’s two sisters (five years later, in one case). It is not known whether they met on the voyage, or knew each other earlier. To read more about the 50-day ocean voyage, click here or on the image below.

Their destination was the Norwegian colony at Coon Prairie, in Vernon County, Wisconsin. This settlement was not only Norwegian, but was made up almost entirely of “Gudbrandsadalers,” no doubt because of the distinctive dialect spoken by residents of the region. It is likely, although no documentation has surfaced, that Ole and his family received money for their passage from relatives or friends already in Coon Prairie, which by then was a thriving community ten years old and growing rapidly. After landing in Quebec, Canada, Ole and his companions made their way by the Great Lakes and overland to western Wisconsin and Coon Prairie.

A Farm of their own

By 1870, five years after his arrival, Ole Larson had acquired at least 80 acres of land about 25 miles north of Coon Prairie, in what seems to have been a spin-off settlement of Gudbrandsdal Norwegians, centered around Brush Creek Lutheran Church, near the town of Ontario. In that year, he was married to another recent immigrant, Anne Samuelsdatter, who came from the parish of Tretten, just two parishes south of Ole’s former home in Sør-Fron. The Larsons operated a dairy farm on their land, living in a house that was still intact (but unoccupied, as shown below) when I visited in 2009 and again in 2013. The featured image at top of page shows the farmyard as it looked in the 1970s. To read more about Ole’s land and neighbors, click here.

In addition to building and operating their dairy, Ole and Anne set about building their family. Their firstborn, Louisa, died at the age of eight months. A year later (1873), they named their second child Louise, a slight variant of the deceased child’s name. Altogether, Ole and Anne had six children, four of whom survived to adulthood. The youngest was my grandfather, Isaac Larson, born 9 February 1884. Read Isaac’s profile …

Anne Samuelsdatter Larson died when Isaac was one year old. I have not researched her cause of death, nor do I know if there were prior health issues. Ole then married Helena Olsdatter, a more recent immigrant who had worked as their housekeeper. But there is a skeleton lurking in the transition. The first of Ole and Helena’s seven children, Alma Larson, was born in January 1884, a month before Isaac’s birth and a full year before Anne’s death. One has to wonder how the family handled this somewhat scandalous situation. Read Helena’s profile …

Just four months after Anne’s death, a storm hit their farm, as described by a neighbor who was about ten years old at the time.* 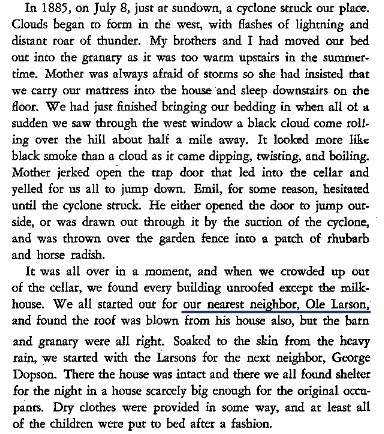 Both Isaac and Alma would have been one year old; Ole and Helena would not be officially married for another year, but it seems probable they were all living together. The gossip must have been heavy. Nevertheless, most of these children, too, grew up to raise families of their own. My database alone names over 1,000 descendants of Ole Larson, but many lines have not been updated in over 30 years.

Ole died on 23 December 1908, most likely of Parkinson’s Disease. He is buried next to his first wife, Anne, at Brush Creek church. Helena is buried a few yards away. A partial list of ancestors resting at Brush Creek includes all four of my father’s grandparents, and three great-grandparents, with at least a dozen uncles, aunts, and cousins. 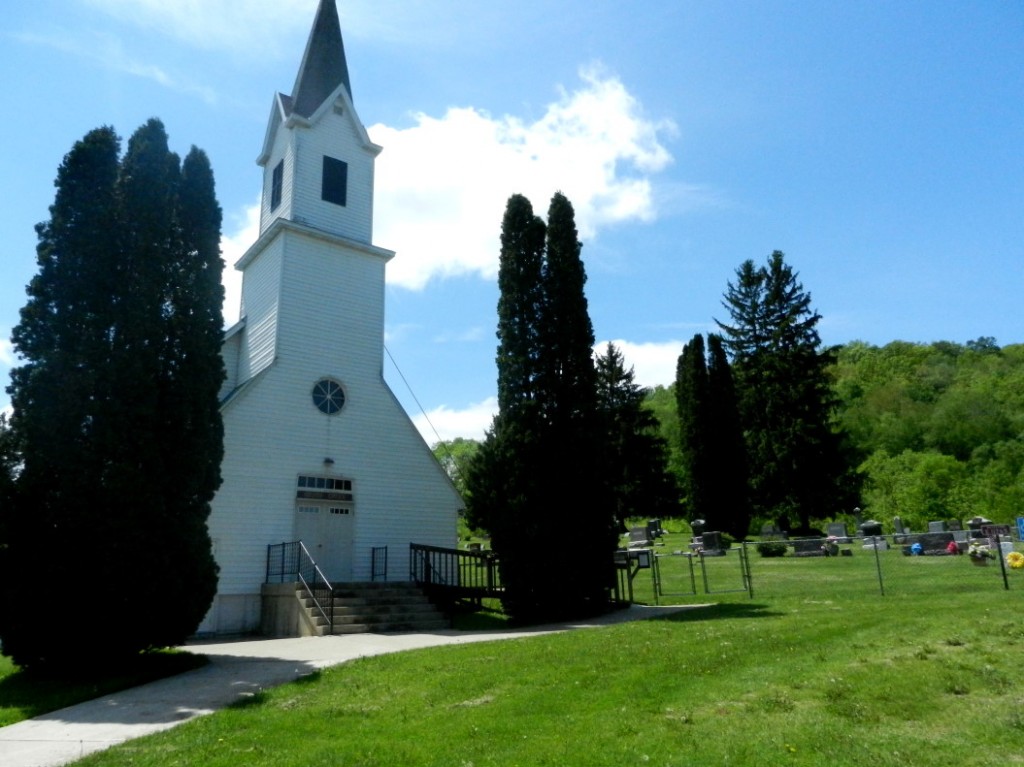