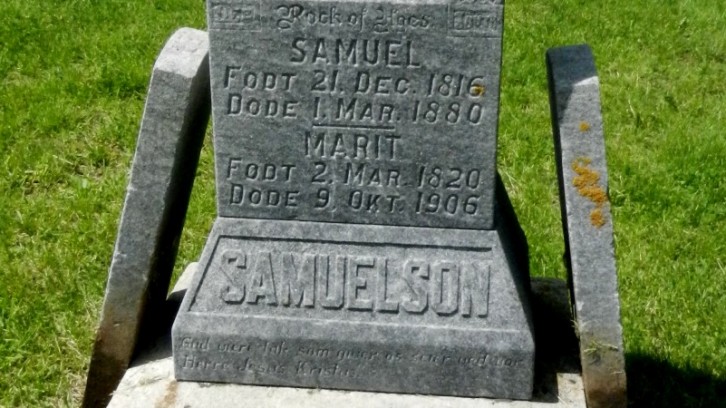 Samuel Jørgensen Bjerke (1815-1880) and Marit Pedersdatter Glome-Ødegarden (1820-1906) were my great-great-grandparents (father’s father’s mother’s parents). Wait, what … about that gravestone?? The surname they chose after immigration, or at least were buried under, was Samuelson, in one of the more bizarre immigrant name-switches I came across in all my research.

20 Dec 1815 Samuel Jørgensen was born in Tretten, a portion of Øyer parish, Oppland, Norway. on the Bjerke farm.  He  was baptized just six days later.Note that his birth date on the gravestone is a year and a day off.

Click here to view their place in the family tree.

1865 Norway census finds Samuel, Marit & four children on a tenant farm named Klævemoen. Anne Samuelsdatter is not listed. She was 20 years old, possibly out of the home (perhaps working on another farm).

26 Apr 1867: Anne Samuelsdatter age 22 departed Christiania on the ship Johannes Rød, arriving in Quebec 31 May. Two other young adults from her farm area were with her, but no known relatives. Anne married Ole Larson in 1870. Click here for Anne’s illustrated story.

01 Jun 1877 Ole’s farm and the Norwegian community in Vernon county were apparently prosperous enough to send for Anne’s parents and siblings. Here is their departure protocol with the Oslo police. Their ship is the Hero, a small steamship running to England. I have not documented their Atlantic crossing.
digitalarkivet

Use of the surname  Jørgensen for the wife and children was atypical in this period in Norway, although it would become more common later. In America, the children used their patronymic surname, Samuelson. The youngest son, Ole Samuelson, raised his large family on a farm near Anne and Ole Larson’s. Some of the Samuelson cousins took homesteads in North Dakota about 1910, near Isaac Larson and his brothers. Ole Samuelson is buried near his parents and sister at Brush Creek.

01 May 1880 More remarkable is that the parents, Samuel and Marit, also adopted the Samuelson Surname. Samuel died just before the US census, but Marit (nee Pedersdatter, widow of Samuel Jørgensen) was enumerated as a Samuelson, along with two adult children in her household.

The topper: At some time after Samuel (Jørgensen) died on 01 May 1880, his tombstone was erected, naming even him as a Samuelson. Who’dve thunk? 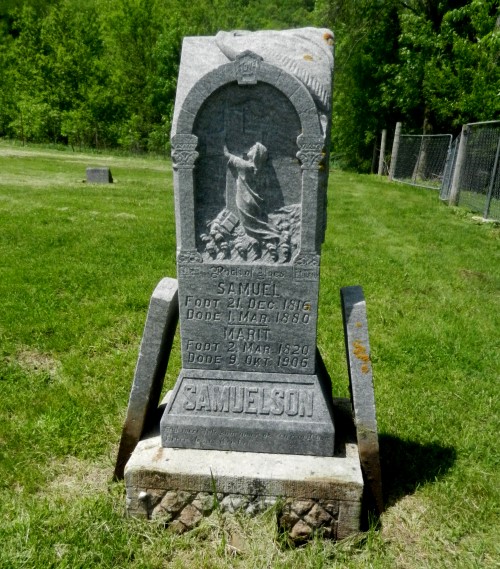 Anne Samuelsdatter shares a headstone with Ole himself. 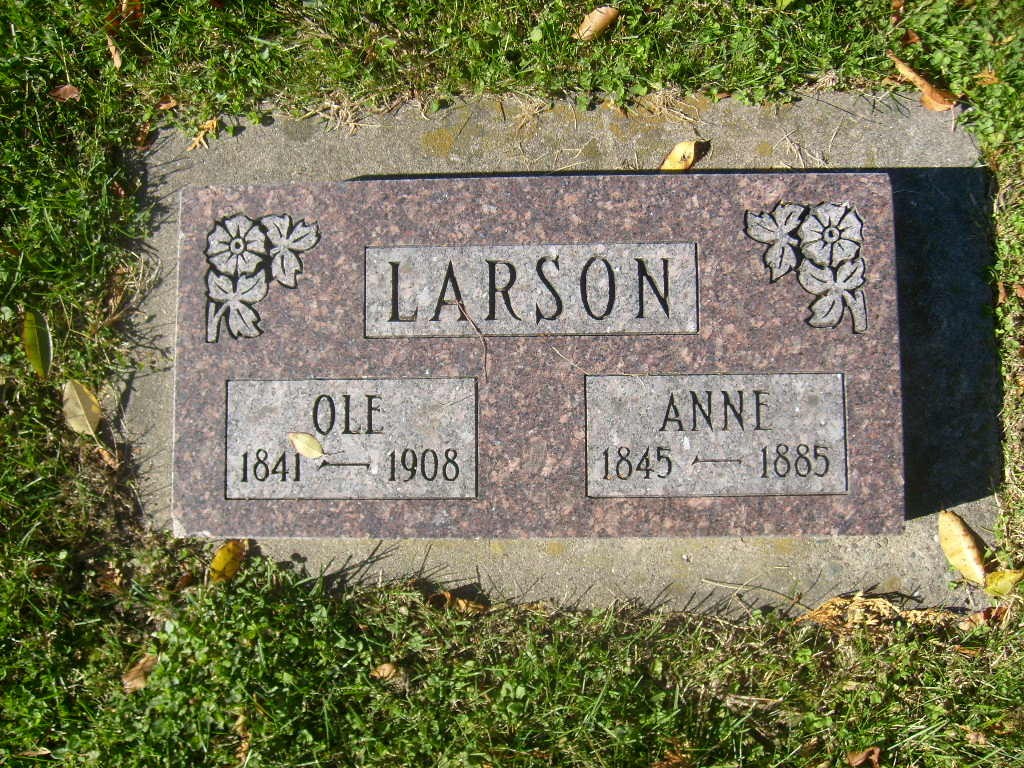