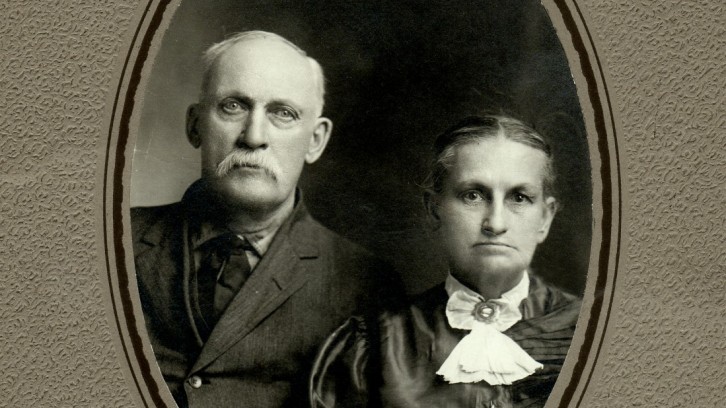 My great-grandfather Stephen Bennett Myers was born in Sunbury, Delaware County, Ohio, 22 July 1848. His parents were Henry Bennett Myers and Leonora Brown (Henry’s first cousin on his mother’s side). Click here to view Stephen’s place in the family tree. There are no known photographs of Stephen as a child or young man. Leonora died when Stephen was a year old. Five years later, Henry remarried, this time to Fanny Myers (his first cousin on his father’s side!), and they moved to Oskaloosa, Iowa. His father died during the Civil War, after a brief, service-related illness.

Here is the obituary of my great-grandfather, as printed in the Onawa Sentinel, Aug. 16, 1917, and brought to light by Jody Boyd. Note the more usual, but unlikely, spelling of the first name; it is “Stephen” in every other source we know of.

He came to Onawa in August 1874 and was married Sept 15, 1875 to Miss Helen Colby, daughter of Mr. & Mrs. Harry E. Colby, Sr. Her father being a member of the firm of F. E. Colby & Co., Leading lumber and coal dealers and a prominent pioneer citizen.

Mr. Myers held the position of assistant county auditor. The office at that time being filled by what was termed an assistant instead of a deputy as at present. Mr. Myers was an expert accountant and was often called upon to audit books both public and private.

Seven children were born to Mr & Mrs. Myers of whom four sons and one daughter are living.

The third paragraph is the stunner. Wounded and left for dead on a Civil War battlefield at the age of fifteen! Further investigation strongly suggests that the story may be “apocryphal” (false or spurious).

In fact, Stephen was even less than fifteen, by about two weeks, at the time of the Battle of Helena. This does not rule out the possibility that he was present at the battle, where his father verifiably was. While the practice described, of a boy accompanying his officer father as a “dependent,” was not uncommon, documentation of individual cases seems to have been spotty to non-existent.

In his earliest documented military service, Stephen enrolled in the Naval Academy on August 1, 1864, at the age of “16 years and 0 Months.” He flunked out after one year, fifth from last in his class, with a note in his record specifying “bad conduct, idle habits, and little aptitude for study.” As noted below, Stephen later served several years in the Army. Of course, that was well after the Civil War ended.

The Battle of Helena

Here, again,  is that yarn from Great-Grandpa Stephen’s obituary:

The Battle of Helena, on July 4, 1863, was a significant engagement and an important victory for the Union, even though it was confined to relative obscurity by the fall of Vicksburg on the same day, and the battle of Gettysburg, which ended the day before. The 33rd Iowa infantry regiment was there, as related in this history. Click on the link to view the entire book at archive.com.

Stephen’s father, and possibly Stephen himself, were indeed part of this regiment (p. 196):

Enlisted men are also listed in the book, but no dependents are mentioned. That does not rule out their possible presence, however.

Of the 20,000 Union troops previously stationed at Helena, 16,000 had gone south for the attack at Vicksburg. The Confederates, in their final offensive in Arkansas, sent 12,000 troops north, in an attempt to overwhelm the depleted forces at Helena. Unfortunately for the Rebels, their intelligence and planning were faulty. Despite the Union’s inferior numbers, Helena’s defenses were excellent. After a battle of several hours, the attackers were soundly driven back. Rebel casualties numbered over 1,600, while the Federal army suffered only 200.

Company C of the 33rd Iowa, the unit mentioned in Stephen’s obit, was caught in an early setback for the Union, at the one post which was briefly captured by the Rebels (p. 29-30). This cost the 33rd Iowa the heaviest casualties of any Union regiment.However, there is little to no chance that 15-year-old Stephen was with Company C. If he was present at all, he would be acting as a manservant to his father and perhaps other officers.

This account leaves out a tactical detail I read elsewhere: the guns of battery “C” had been disabled by the defenders before they abandoned them.

Since the battery was quickly retaken, and the enemy routed the same morning, it seems implausible that any Union casualties would be “left on the field for dead” for 24 hours.

However, there is one well-documented incident in this very battle that bears some resemblance to the anecdote in Stephen’s obituary. A certain Private Thomas A. Moore is profiled on this free page at Rootsweb. Coincidentally, Moore’s unit was the 33rd Missouri, and Stephen’s, the 33rd Iowa. It was not reported where in the battle Moore’s injury took place.

The enemy attacked their works on the fourth of July a few minutes before daylight. Thomas was listed as having received a “gun shot wound over right temple” and “pronounced mortal” but a passing soldier found a breath of life in him and he was taken to a Memphis hospital where he remained until he was discharged on permanent disability on 14 Dec 1863.

Thomas Moore survived for several years. Despite being partially disabled, he was able to work, marry, and father children.

It seems clear that this incident, whether witnessed by Stephen or related to him by his father, became the basis of an apocryphal version, highly embellished, with the principal character changed to young Stephen. Late in life, he was rumored to be a hard drinker, and was a charter member of the GAR chapter in Onawa (Grand Army of the Republic, a fraternal order for Union veterans of the Civil War). Perhaps a tall tale told at the hall, or even offered as an excuse for a drinking problem.

In another war-related irony, Stephen B. Myers was second cousin  to Stephen Crane, author of one of the most famous Civil War novels, The Red Badge of Courage. That makes Crane my second cousin, 3x removed. Grandpa Stephen may or may not have been aware of this relationship; either way, perhaps he identified (for good reason) with the book’s young protagonist.

The packet which Paula assembled on Stephen B. is more voluminous.  He turns out unable to authenticate most his claims for pensions — like his disability for a groin rupture which could not be verified by any medical sources, during any of his enlistments. His applications for pension were refused as late as December 1914 because he “did not serve” during either the Civil War or the War with Mexico which were applicable under the Interior Department’s entitlement act of May 11, 1912.

He floated around a bit, served several times in units of the US Army.  Before eventually settling in Onawa IA , he went from his parents home in Oskaloosa IA back to Sunbury OH (not sure which part of the clan he was staying with) following the Civil War. He then enlisted in the army General Services for three years at Columbus OH (next county to Sunbury’s) on July 6, 1866.  He served his three-year hitch. He re-enlisted in Louisville KY on July 6,1869 in General Service USA and was discharged May 5, 1870 as a sergeant, with clerk speciality.  He re-inlisted May 10, 1870 assigned to Company C 2nd Infantry.  He transferred February 1, 1873 back to General Services and then was honorably discharged August 1, 1873 from the 43rd Division of the South with grade of sergeant.  That itemized record came from the summary refusing his claim for disability and signed November 2, 1914 by Commisioner of Pensions, Adjutant General H. P. McCain (??) Regular Army, War Department.

So, according to the War Department’s denial of his claim, Stephen “did not serve” in the Civil War. Does this mean that in his obituary, not only the detail about being “left for dead,” but the whole story of going to war with his father, was a fabrication? I would say it is evidence of that, but not at all convincing, given the government’s ultra-stingy stance regarding pensions during this period, and Stephen’s purported status at the time, as an underage dependent traveling with his father.  Unfortunately, no other evidence has come to light that would tip this question in either direction.

Another question in my mind involves Stephen’s motivation for enlisting, to spend a total of seven years in the Army, after his disastrous term at the Naval Academy, which in turn came on the heels of his father’s early death, from dysentery contracted during the campaign of the 33rd Iowa.

Here is an interesting piece on underage soldiering, at the Civil War Potpourri site.  It says that about 100,000 soldiers were boys of fifteen or under. However, if Stephen went to the war at all, his duties would have been as a servant to his father, and perhaps the other officers. It is not plausible that he would have been thrust into a combat role.

On 15 September 1875, Stephen Married Helen A Colby. Helen was the daughter of Harry Eugene Colby and Susan Eldridge. Harry was a prominent businessman in Onawa; his detailed profile will be published soon.

Stephen worked in the Monona County government as an accountant. He may well have worked in the building pictured below, built in 1892 and remodeled in the 1990s.

Upon Stephen’s death, several children wrote letters of condolence. Here is the one from my Grandpa Myers:

Helen Colby Myers moved to the coal-mining town of Kenilworth, Utah to live with her son Henry, and died six years later . Stephen and Helen, and young Eldridge, are buried in Onawa City Cemetery. Their memorial was refurbushed in 2017.