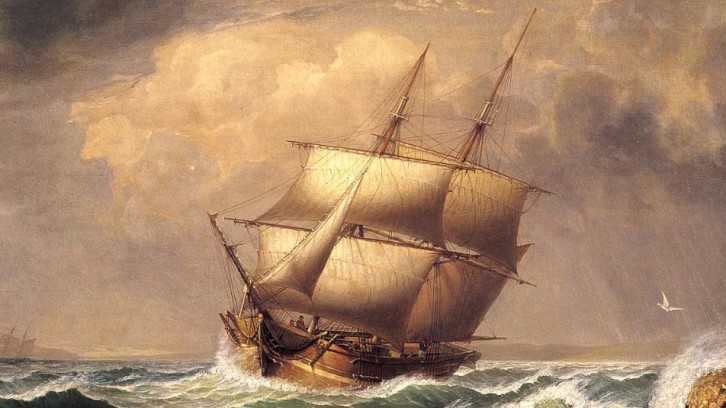 When Ole Larson, his sisters and mother came to America in 1865, they rode a sailing ship. Transatlantic steamships were still experimental; A few ships had made the crossing, but required a full load of fuel to achieve it, leaving no capacity for cargo or passengers.

The Larsons’ ship, the Atalana, was a “brig,” one of the smaller types used for ocean crossings. The drawing below purports to be the Atalanta herself. All illustrations and most info are from Norway Heritage. 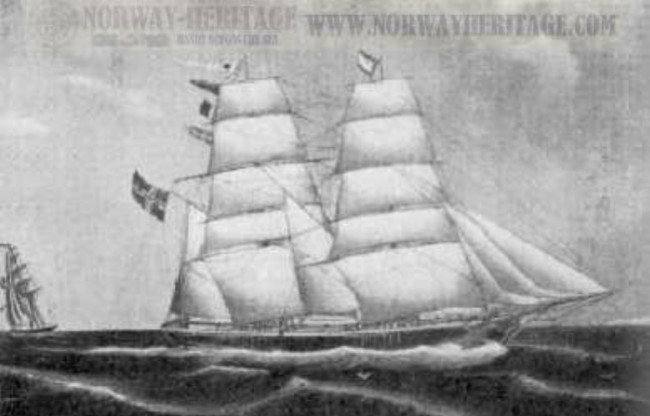 The Larsons’ voyage took 50 days, a little under average for the time. When ships encountered storms or other trouble, voyages of 80 days or more were not uncommon.

These were cargo ships; the cargo compartment between decks was temporarily (and crudely) outfitted to house a large number of passengers, in often squalid conditions. This kind of accommodation was known by its nautical term, “steerage,” so named because weight was needed in these compartments to properly steer the vessel.

There are more illustrations and articles describing the journey at the same site. Remember that the Atalanta was one of the smallest ships in this service; even she had over 160 steerage passengers. In addition to the overcrowding, the food was meager, brought aboard in limited quantities by the immigrants themselves, and sanitation was abysmal. It must have been grueling even for the hardiest of passengers. I can hardly imagine what it was like for the 65-year-old, impoverished widow Anne Larsdatter.

In 1866, the year after Ole’s immigration, the number of emigrants leaving Norway per year jumped from under 5,000 to more than 15,000. This huge outflow continued through the 1880’s; during that decade alone, over 175,000 people – more that a tenth of the country’s population – sailed away. By this time, sailing vessels had given way to the much larger and faster steamships (which also used sails for part of their power).

During this later era, the most popular route of immigration from Norway (and elsewhere in Northern Europe) was via England (especially the port of Hull).

On June 3, 1881, Gunder and Engebret Sletten sailed from Oslo on the Steamship Angelo, of the Wilson Line. Helene Olsdatter  departed on the same ship two weeks earlier. 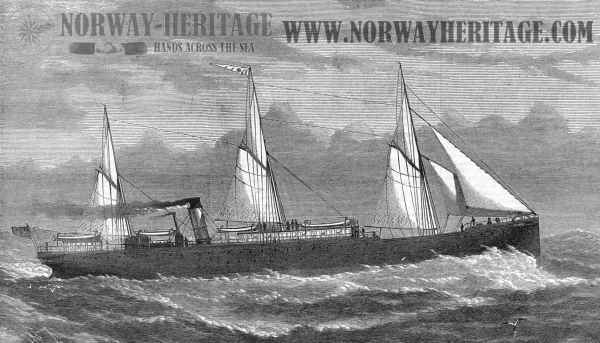 After the Angelo docked at Hull, the passengers had either to remain aboard to wait for rail passage across England, or wait in the  railway station. “Same-day service” was by no means guaranteed, and there were no lodgings available for transmigrants in Hull (even if they had been able to afford them). 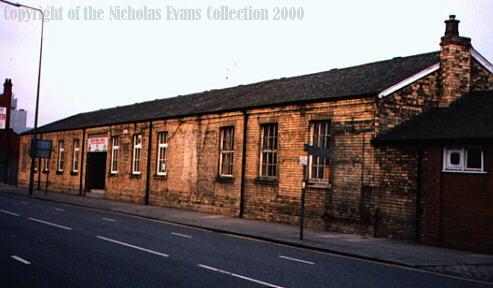 The Emigrant Waiting Room of the North Eastern Railway Company at the Hull Paragon Railway Station. The waiting room was built for the Scandinavian transmigrants in 1871 and then extended in 1882. [Photograph copyright of the Nicholas Evans Collection, © 2000]

From Hull, migrants traveled by rail to the great port of Liverpool, on the west coast of Britain, where steamships bound for America were departing on an almost daily basis.  These ships carried up to 1,000 passengers in “steerage,” where conditions were marginally better than they were earlier, being now regulated by law, but even so, would be considered intolerable today. (I mean, we think it’s a drag to fly “coach!”) One such ship sailing from Liverpool was the SS Lord Clive of the American Line. 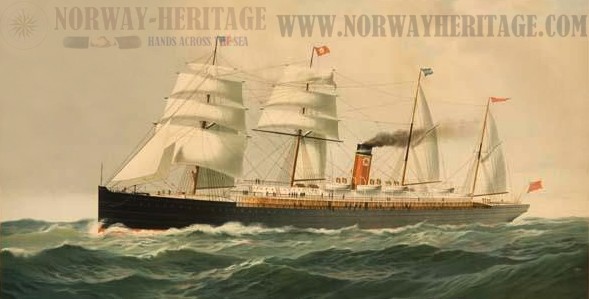 The Lord Clive arrived at the port of Philadelphia on either June 19 or June 21, 1881, according to conflicting reports. I now believe (but not firmly) that Engebret and Gunder were among the 730 steerage passengers aboard. However, I have yet to convince my colleagues (cousins) Aline, Clarice, and Mary, who have studied the problem longer and harder than I.